Belarusian Economy in March: Warming Up

Amidst the snowy spring of 2013, the National Bank of Belarus finally gave up on its attempts to maintain macroeconomic stability and turned its attention to the real sector.

The National Bank began carrying out a policy of providing cheap credit to carry out modernization, the new holy cow of the government. It also set its sights on meeting the forecasted 8.5% of GDP growth till the end of the year. Meanwhile, independent experts agree that this policy is incompatible with the inflation forecast of 12% in 2013.

The GDP growth rate is rising again – in January-February 2013 the Belarusian economy grew 4.4% compared with the same period last year. However, there is no macroeconomic miracle unfolding.

Just as the oil refining business was a driver of growth last year, this year a surge in potash exports that explains the economy's success. As a result, the growth across regions has not been homogenous: the Vitsebsk oblast, which is in recession, can explained by declines in oil refining and oil trade; the Minsk oblast, home of a major potash trading company, experienced record growth at 8.3%.

Again, the growth in investment is not homogenous, and on the regional level some of the regions, like the city of Minsk or Hrodna oblast, continue to witness a decline in investment, while others, like Vitsebsk oblast, almost doubled their investment activities.

This heterogeneity in investment suggests that the aggregate investment growth is not a result of macroeconomic stabilisation or increased optimism from the real sector. Rather it is a sign of directed modernization, which has already begun in certain state-controlled enterprises.

Meanwhile, the imbalances in the real sector continue to accumulate. The Belarusian economy still suffers from the same old ailments: real wages are growing faster than productivity, directed increases in output result in increases in inventory stocks, and the country's foreign trade balance is negative.

Despite the significant efforts to stabilise inflation in 2012, in the beginning of 2013 Belarus was the clear leader in inflation in comparison to its neighbouring countries. Over January and February 2013 the prices in Russia increased by only 1.5%, while in Belarus the increase was 4.3%.
Ironically, as the government fights to keep inflation within the yearly limit of 12%, spikes in government-controlled prices are responsible for consumer inflation. After the slight inflation slowdown in February the National Bank decided to cut its main interest rate – the refinancing rate.
Since March 13, the Bank has cut refinaning rate by 1.5% to the level of 28.5%. That is the first cut in the rates since September. While the initial plan for 2012 was to cut the refinancing rate each month, this process had to be stopped in September as the National Bank saw that further cuts could increase currency demand and pose a threat to macroeconomic stability.
The economic situation has remained the same since September: monthly inflation rates do not show significant decline and the trade balance continues to deteriorate. The only reason, which could motivate the national Bank to cut the refinance rate (and a 1.5% cut is a significant change), is a desire to stimulate the real sector by providing cheaper credit. As a result, in March banks no longer had problems with liquidity. 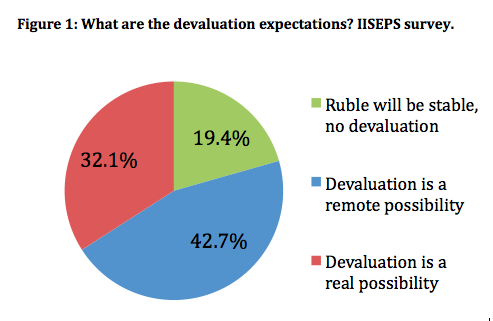 The softer monetary policy may be premature and may result in deterioration of Belarus' macroeconomic stability. Lower rates do stimulate credit and economic activity, but they also stimulate imports (in particular, of intermediate goods) and make ruble-nominated deposits less attractive, which may result in a higher demand for currency.

Given Belarus’ limited currency reserves coupled with the high debt repayments due this year and the negative current account balance, these factors create inflationary and devaluation pressure. Luckily, there are no signs of the realisation of this pressure in the immediate future.

Expectations already reflect the possibility of devaluation: 32.1% of people consider devaluation a real threat according to a survey by the Independent Institute of Socio-Economic and Political Studies (IISEPS) conducted in March 2013. The exchange rate, it should be noted, is quickly approaching the psychological barrier of 8700 rubles per 1 USD.

The negative current account balance and a large amount of debt to repay this year are probably the main challenges facing Belarusian economy. The hopes of getting a $2bn loan from Russia are fading away, and the IMF loan seems like an attractive option, even if it comes with strings attached.

On 14-15 March the IMF mission spent time working in Minsk. IMF officials praised the government for its achieving macroeconomic stability, but warned about the possibility of another round of devaluation if the government puts in to play a stimulation policy to boost growth. IMF mission head David Hofman did not exclude the possibility of the Fund’s cooperation with the Belarusian government, but stressed again that the joint program will be possible only if Belarus agrees to specific reforms.

After the mission concluded its work, the Ministry of Economy announced that it was drafting a project of cooperation with the IMF. This project will not include a standard stand-by credit line. Rather it would be a development program with the IMF dealing with financing reforms and modernization in the real sector. The government plans to present its project to the IMF in April.

The last IMF experience in Belarus was not a pleasant one: a stand-by program, initiated in 2009, resulted in a serious currency crisis in 2011. IMF has since realised that the National Bank and the government do not always follow their recommendations, and now the IMF wants “a credible commitment at the highest level”.

This article is a part of a new joint project between Belarus Digest and Belarusian Economic Research and Outreach Center (BEROC) – a Minsk-based economic think tank.