Feminism in Belarus: present but unpopular

This year the World Economic Forum (WEF) ranked Belarus 30th out of 144 countries in its Global Gender Gap Index.

According to its indicators, Belarus surpassed highly developed countries such as Canada (35) and the United States (45). However, unlike other countries at the top of the list, Belarus does not have any coherent strategy to achieve gender equality.

2016 also saw a record increase of activity at the UN Committee on the Elimination of Discrimination against Women (CEDAW), where Belarus presented its 8th periodic report in October 2016. Independent NGOs and initiatives presented seven alternative, or 'shadow', reports disputing the celebratory official narrative on the state of women in Belarus.

They touched upon the issues of gender-based violence, labour rights for men and women, and reproductive health, as well as women with disabilities, and the LGBTQ community, among others. Only 1% of Belarusian NGOs advance women’s rights and among these even fewer identify themselves as ‘feminist.’

The official gender equality strategy in Belarus differs from the Western European pro-feminist approach, and focuses primarily on family policies. No politician has ever openly called themselves a feminist in Belarus. Quite the contrary, while the West promotes individuality and women's rights in social, political, and economic spheres, Belarus continues to emphasise family values and maternity for women.

Feminism remains a taboo word in Belarus. Few women openly admit to being feminists, to say 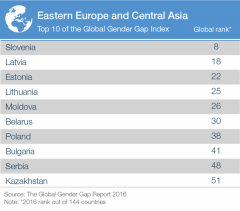 nothing of men or influential decision-makers. In fact, most public figures prefer to distance themselves from the feminist agenda. Neither mainstream nor oppositional political parties have a strong feminist or gender equality strategy.

Women constitute 53% of the population in Belarus. They hold about 34% of seats in parliament, live on average 74 years (11 years longer then men), are well educated, and about 70% of them work outside their household. Is it possible that Belarusian women enjoy equal rights and opportunities and therefore do not relate to the global feminist movement as the WEF indicators suggest?

Some argue that the Soviet Union liberated women in Belarus; it provided them with all the opportunities and services which feminists in the rest of the world had to fight for. Not only did women in Soviet Belarus gain access to education and prestigious professions, they also enjoyed state healthcare, access to childcare, and the right to legal abortion. Most of these rights and services carried over into modern Belarus even after the USSR was dismantled. For instance, Belarusian women continue to enjoy generous maternity benefits.

The flip side of this generous policy presented itself later. In the 1960s, the rest of the world was engaging in ‘second-wave feminism'. Women in the US and Europe started to broach the subjects of domestic violence, marital rape, and the exploitation and control of female sexuality. Meanwhile, the ‘woman question’ appeared to be solved in the USSR and Soviet Belarus. However, as women gained access to education and new professions, they also continued to bear the brunt of housework and caretaking. 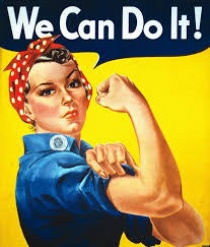 According to a 2012 sociological survey carried out by the agency NewEffector, neither men nor women in Belarus need feminism. Belarus displayed the lowest level of tolerance towards feminist ideas in comparison with Ukraine and Russia.

Therefore, feminist ideas remain marginal for both state and oppositional politics. Since early 2000, Belarus has implemented four Gender Equality Action Plans, but all four lacked any measurable indicators or allocated budgets. The outcomes remained intangible and had to be taken at face value from the Ministry’s reports.

Non-governmental actors face backlash if they decide to use the word 'feminist' in their agenda. Irina Solomatina, a Belarusian feminist and activist, recalls a story when certain publishing agencies refused to print their materials because they contained the word 'feminist'. 'A few years ago I attended an exhibit in Moscow entitled "Feminist Karandash." This is when I realised what tremendous pressure the curators and organisers faced for using the word. I decided to fight my inner stereotypes and use the word "feminism" more often.'

The only international body capable of holding the country accountable for women's rights issues and gender equality is the UN Committee on the Elimination of Discrimination against Women (CEDAW). This is a forum where countries regularly report on their achievement in this sphere. Based on Belarus's official documents, along with shadow reports presented by NGOs and initiatives, the Committee came up with several recommendations.

This year the Committee recommended adopting comprehensive anti-discrimination legislation, laws against domestic violence and gender-based violence, and comprehensive attempts to eliminate discriminatory gender stereotypes. As experience from previous years and reports has shown, Belarus adheres minimally to the recommendations, but still manages to look good and rank high in terms of gender equality.

Who are the feminists 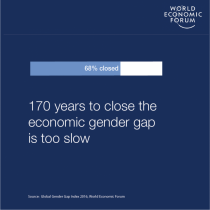 The unfortunate reputation of the word ‘feminism’ seems to have scared many people away. But in reality everyone who believes in equal education for boys and girls, voting rights for women and men, and equal pay for equal labour should call themselves feminists, regardless of their gender or their interpretation of feminism. However, few women identify as feminists, and feminist men are almost nonexistent.

Belarusian women do not feel oppressed and men do not see how they propagate the patriarchy. While statistics show that every third woman and every fourth man in Belarus has experienced violence in their lives, no one seems to have connected this to gender inequality and discriminatory stereotypes. Few people have woken up to their oppression, either personally or politically. Abuse remains widespread and tolerated.

Meanwhile, experts point to the emergence of new types of online initiatives in Belarus focusing on gender equality which lack the status of official NGOs. They promote a feminist and gender agenda through online resources. Examples include Makeout.by and gender-route.org. Most importantly, they also embrace LGBTQ communities who remain otherwise highly marginalised in Belarus.

The WEF has calculated that at the current pace of progress, it would take the world around 170 years to close the economic gender gap universally. In Belarus, the gap remains wide. The state reinforces the role of the traditional family, and Belarusian society has not yet identified the need for more equal power distribution among its individual citizens.