Ice Hockey World Cup in Minsk: the Party Is Over

On 25 May the final game between the teams of Russia and Finland brought the Ice Hockey World Cup in Minsk to an end. The biggest international event in Belarus’ sovereign history lasted for 17 days and turned Minsk into a different place. The normally calm and strictly disciplined city became one big party.

The inflow of tourists created an aura of internationalism that blended and mixed in its own unique way with various local peculiarities. As a result, the colourful celebrations and record-breaking attendance of the matches went hand-in-hand with such egregious things as preventive arrests of opposition activists and a prohibition on selling imported beer.

One of the most notable moments came at the end. The final night of the tournament saw an invasion of Minsk by Russian fans, which caused mixed feelings among the city’s inhabitants.

Long before the start of the tournament, Aliaksandr Lukashenka proclaimed that it would become the best World Hockey Cup in history. His statements suggested that he considered the games attendance numbers as the central criteria of success.

Not surprisingly, the championship in Minsk broke the previous attendance record from the 2004 World Cup in the Czech Republic. About 640,000 spectators came to watch the games in Minsk, whereas the Czech tournament had around 552,000.

The use of administrative resources (mandatory distribution of tickets among state enterprises or free giving out of them to young hockey players) undoubtedly played some role in setting this record. However, it seems that the main factor had to do with the enormous interest that the World Cup had stirred up in Belarusian society. Tickets, especially for Belarus' games, were in huge demand. It looked like local people enjoyed the championship and were interested in becoming an active part of it.

These sentiments coincide with the polling data. According to the Independent Institute of Socio-Economic and Political Studies (IISEPS), only 8.6% of Belarus’ citizens supported the idea of pulling the World Cup from Minsk due to the political situation in the country, a move that some opposition and civil society activists promoted.

The exact number of foreigners who visited Minsk during the championship remains unknown as Belarus has an open border with Russia, where the majority of fans came from. According to the Belarusian authorities, foreign citizens had purchased more than 70,000 tickets. And the Border Guards reported that about 31,000 tourists arrived from countries other than Russia.

Rene Fasel, President of the International Ice Hockey Federation, complimented Belarus on its superb organisation of the games. The absolute majority of foreign fans who came to Minsk held the same opinion.

Indeed, the organisers offered various appealing opportunities for different categories of fans. 14 new hotels and dozens of cafes and restaurants had been opened before the Cup’s start. Rich fans could stay at new 5-star hotels and enjoy the beauties of the Minsk nightlife available to the more well-off. And those with a lower budget could rent rooms in student dormitories, which had been vacated for the duration of the World Cup, and spend time in the so-called 'hospitality zones'.

The biggest such zone was located in the very centre of the city and consisted of a large stage for live performances, space for dancing, numerous open-air fast food cafes and small souvenirs shops. One could find cheap food and drinks (including beer for $2-3 a bottle) there.

No wonder, these hospitality zones enjoyed great popularity among both foreign fans and local citizens. Every day of the tournament, thousands of people would find their way to one. And the last night, according to official estimates, saw around 200,000 people celebrating the end of the World Cup in the hospitality zones.

Aliaksandr Lukashenka ordered that during the tournament the police should not stop fans from drinking alcohol in the streets, even though this violates the Belarusian laws. The order turned the whole championship into a big drinking event.

One Finnish fan that the author had a chance to talk to offered an accurate summary of what was happening in the hospitality zones: “I have been to many Ice Hockey World Cups and I assure you that only in Minsk has it become such a huge party”.

Thus, the 17 days of the championship turned the otherwise calm and orderly city of Minsk into a long and relaxed party. Many Belarusians could, perhaps for the first time in their lives, meet Swiss, Czech, Swedish or even Canadian nationals and toast with them even without knowing a word in a foreign language. It appeared to be a real and important opening up event for the country.

Unfortunately, the positive effects of the World Cup coincided with a number of sad developments. First of all, the authorities resorted to their usual arsenal of methods to make sure that opposition activists did not try organise pickets or other unwanted actions during the tournament. They preventively arrested over 20 activists, ostensibly for misdemeanours, and sentenced them to 15-20 days in prison.

Another example of how the Belarusian government’s habitual nature affected the tournament revealed itself in a less expected way. A couple of days before the start of the event, the authorities of Minsk advised all shops, cafes, bars and restaurants to sell only Belarus-produced beer during the championship. In the Belarusian administrative vocabulary, such 'advice' amounts to a direct prohibition. Apparently, the authorities saw it as a way to boost local brewers’ sales. 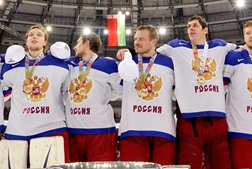 In all probability, the majority of fans did not even notice this unexpected monopoly of Belarusian beer. But foreign businessmen who consider investing in Belarus must have made some additional conclusions about the country’s business climate.

Russians Are Coming and Going

The last night of the World Cup looked different from the rest of the tournament. While most foreigners were leaving Minsk, more Russian fans came to support their team in the final game against Finland – including Vladimir Putin, who kept his plan to visit Minsk a secret.

After the match, the central streets of Minsk became flooded with Russian flags and people celebrating their victory. The behaviour of Russian fans seemed to confirm all traditional stereotypes: drunk, reckless and aggressively patriotic — some waiving Soviet or Russian flags with Crimea written on them. They received mixed reactions from Minsk's inhabitants. Many joined Russian fans in their celebrations and loud victorious chants. And others tried to stay away and simply enjoy the last hours of a party so large, Minsk had never seen the likes of it before.