Belarus works to make its tourist infrastructure China-friendly. The authorities plan to create the traditional festive atmosphere during the local elections on 18 February. However, local councils in Belarus remain little more than voluntary social work and attract little competition.

This and more in the latest Belarus state press digest.

Lukashenka thanks Latvia for advocating the lifting of sanctions and its attitude towards the Belarusian NPP. The Belarusian president described the arrival of Latvian prime minister, Māris Kučinskis, to Minsk as ‘a very welcome and meaningful visit’ according to Belarus Segodnia. However, he took the opportunity to tell his guest: ‘You just need to get rid of the feeling that we are too dependent on our brotherly Russia and are not able to take any steps independently. We adhere to the policy of not creating problems for our neighbours. We never reproached you for joining the EU. On the contrary, we try to benefit from this… And we will never ally with any country against Russia, as well as against Latvia.’

Lukashenka also expressed his gratitude to the Latvian Prime Minister for Latvia’s active promotion of the lifting of sanctions against Belarus, including during its presidency of the EU Council. Now Riga looks equally constructive in its approach to the construction of the Belarusian nuclear power plant, he noted.

Lukashenka admits to the failures of the defence ministry in information policy. On 13 February, the Security Council held its first meeting dedicated to summing up the work of the military and security agencies in 2017. The meeting particularly considered the problems and achievements in the military sphere, writes Belarus Segodnia.  Lukashenka mentioned that some ‘unexpected statements’ came from foreign partners regarding the Minsk agreements, but it is obvious to everyone that no real alternative exists today. 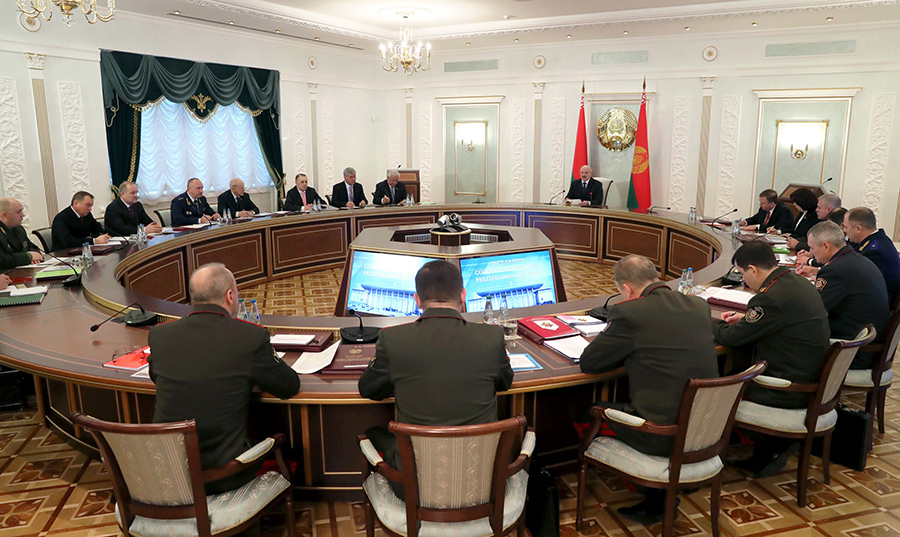 The Belarusian leader noted that the Russian leadership lacks understanding of the need to jointly strengthen the national armed forces of the Collective Security Treaty Organisation. He also demanded that the Ministry of Defense immediately strengthen its ideological work, including information policy. He admitted that the ministry failed in its responsibilities in this sphere and, in particular, ‘the coverage of the West-2017 military exercise in the media was badly organised.’

Dzmitry Žuk explained: ‘The task is to show fairly how the country lives. Do not fool people, but give [them] the most objective information.’ According to Ivan Ejsmant: ‘The head of state asked us to modernise our television – both in terms of picture and content. To make it watchable and competitive compared to the TV channels of neighbouring countries.’ While Ihar Lucki added: ‘The most important thing is the development of national content. The share of Belarusian programs should increase. It is important to have new faces and new content.’

Belarus works to make its tourist infrastructure China-friendly. In December 2017, the prime ministers of Belarus and China during the Council of Heads of Government of the Shanghai Cooperation Organisation declared 2018 the Year of Tourism of Belarus in China. In 2017, Belarus received about 20,000 Chinese tourists, but this figure could be higher, says the deputy minister for sport and tourism, Michail Partnoj. To attract more Chinese travellers, the country has to resolve a couple of basic problems: ensure visa-free entry and introduce more convenient logistics. For example, today flights from Beijing to Kiev and Moscow cost at least 250-300 dollars less than flights to Minsk, informs Respublika.

At the moment, Belarus has trained 15 Chinese-speaking guides, introduced Chinese information in the arrivals hall of Minsk National Airport, produced Chinese audio guides for the main tourist sites, and made some other steps to make Belarus China-friendly. Chinese visitors take most interest in the communist legacy in Belarus, particularly related to the Russian Social Democratic Labour Party, the disintegration of the Soviet Union and World War II.

Local councils in Belarus remain a kind of voluntary social work. While in most of the Minsk city constituencies five or more candidates compete for a council seat, in the countryside the competition remains scarce, reports Narodnaja Hazieta. Even at the level of regional councils many constituencies go uncontested. Political analyst Aliaksandr Špakoŭski explains this with a mere fact that the deputies serving on local councils do not receive a salary or any other benefits. Essentially, they perform a kind of social work. Besides, unlike in the parliament, local councils do not make real political decisions.

A buffet at a polling station during the 2014 local elections. Photo: tut.by

Špakoŭski calls for a review of the legislation on political parties and to think about creating mechanisms for public funding of parties, including national funds, which will be engaged in the support and development of constructive parties. It is necessary to develop the political space, but the authorities should not grant power to institutions that have no support within the society, that is – the currently weak political parties.

The authorities will create a festive atmosphere during local elections on 18 February. According to Siarhiej Konanaŭ, first deputy chairman of the Žodzina City Executive Committee, retailers and catering facilities will offer their products and services at polling stations. The authorities strive to not only get the people’s votes but offer them entertainment and music, writes Zviazda.

Children will be able to feast with ice cream, biscuits and juice. The neighbouring Smaliavičy district will also create a festive atmosphere with performances of local music bands. On the same day, the holiday of Maslenitsa (Slavic Carnival) will be held on the central square. Residents of the area will be able to enjoy pancakes, as well as participate in games and contests.