Minsk Forum 2014 Brings the Spirit of Discussion Back to Minsk

On 1-2 December the international conference “Regional Stability and Modernization: Challenges and Opportunities for EU-Belarus Relations” took place in Vilnius and Minsk.

For the first time since the crackdown on the mass protest against the presidential election results in December 2010, the German-Belarusian Society organised an event in Minsk.

The conference produced a list of concrete policy recommendations and, more importantly, helped to bring the forgotten spirit of constructive discussion back to Belarus. For a country where stakeholders are not used to talking to each other this presents a more crucial value than the conference’s formal outcomes.

In 1997, the German-Belarusian Society in cooperation with the Minsk-based Analytical Centre Strategy launched a conference that soon transformed into something unique for Belarus. Once a year the Minsk Forum gathered together almost every major Belarusian political and civil society actor as well as stakeholders in Belarus-EU relations. The forum’s venue managed to host over 300 hundred people for two or three days of tense, open discussions.

It was the only event of its kind in Belarus. Only there could one observe such unusual scenes for the Belarusian political reality as, for example, a leader of the opposition and former presidential contender talking to the head of the Presidential Administration.

In 2010, the last such forum took place. The brutal events that followed the presidential elections of 2010 and the imprisonment of a number of opposition activists brought the Minsk Forum to a halt. The German political foundations, which used to sponsor it, declared that they would not do so long as political prisoners remained behind bars. Against the background of deteriorating EU-Belarus relations, the forum was cancelled in 2011 and did not take place in 2012.

In 2013, however, the Minsk Forum was reincarnated in the form of a conference in Vilnius. For two days the leaders of the Belarusian opposition and NGO community discussed ways to improve the relations between Belarus and the West with diplomats, politicians and experts from the EU. They do so without any representatives from the Belarusian authorities present.

Finally, this year a partial return of the Minsk Forum to its original venue unfolded. The German-Belarusian Society in partnership with the East European Studies Centre (Vilnius), Analytical Centre Strategy (Minsk) and the Centre for Analytical Initiatives of the Liberal Club (Minsk) organised a two day cross-border conference: the first day took place in Vilnius and the second one in Minsk.

This time the Belarusian authorities did not accept an invitation at a political level but delegated a number of diplomats to participate in the conference’s expert roundtables. This itself can already be seen as a small step forward. 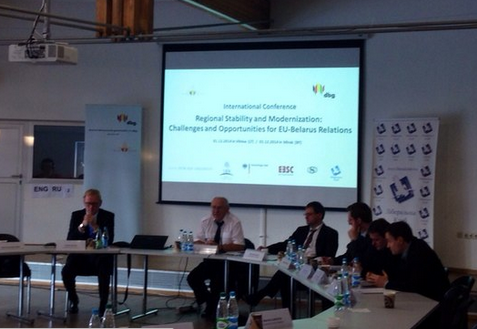 During the two days the discussions focused on the regional challenges that Belarus and the EU face in the context of the Ukraine crisis and opportunities in their bilateral relations.

The ambassador of Germany to Belarus Wolfram Maas spoke of the necessity of reevaluating the way certain things are perceived in the EU’s policy towards Belarus. For example, he proposed to look at the Bologna process as an opportunity for young Belarusians rather than as a gesture to the Belarusian government. At the same time, he asked not to touch “the ties between the sanctions and the political prisoners” in the ongoing debates about ways ahead in EU-Belarus relations.

Balazs Jarabik, Pact Belarus project director and a visiting scholar at the Carnegie Endowment for International Peace, opined that the current EU-Belarus dialogue looks better than the one in 2008-2010: “in those years we were declaring a dialogue, now we are doing it”.

Valery Karbalevich of the Analytical Centre Strategy reminded about the escalation of tensions between Russia and the West, particularly militarily, as a factor in EU-Belarus relations: “against a backdrop of this increasing escalation, Belarus might find itself impotent in the face of Russian pressure”.

Ambassador of Lithuania Evaldas Ignatavicius argued that the existing Eastern Partnership (EaP) format was not sufficient for further progress in the region in general and in the relations with Belarus in particular. He suggested that more regional horizontal activities be developed. For instance, new cross-border projects between Belarus, Ukraine and the Baltic states.

Ambassador Dirk Schuebel, head of the EaP-bilateral division at the European External Action Service, offered some details of the present-day dialogue with Belarus. According to him, the EU welcomed a number of decisions that the Belarusian government took over the last year. These positive developments included the release of the human rights defender Ales Bialiatski, the start of the visa negotiations and its independent position on the developments in Ukraine, as well as President Lukashenka’s positive statements on Moldova’s Association Agreement with the EU. 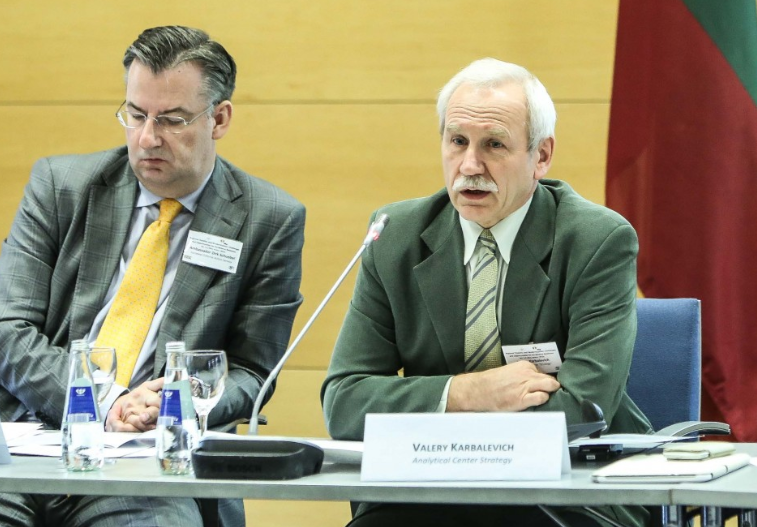 He expressed appreciation for Belarus’s active participation in the EaP’s multilateral track and said that the EU was also ready to increase the number of its activities with Belarus and in Belarus. In Schuebel’s words, “it is too early to talk about a window of opportunity before the next presidential elections, but the EU should not miss an opportunity when it arrives”.

After the conference, the organisers disseminated the conference notes that include eleven recommendations to policy-makers in the EU and Belarus:

However, the recommendations were in a way secondary to the fact that the event was able to take place only after three years of the Minsk Forum’s suspension. Still, for Belarus even such a tiny, and not particularly successful, attempt to gather various actors and stakeholders in one room is an important step forward.

In a country where people do not talk a lot to each other about numerous internal and external challenges and ways to meet them, any such attempt serves a better cause than meaningless confrontation.

The smartest thing that the Belarusian government can do at this point is to invite the German-Belarusian Society to hold a full-fledged Minsk Forum next year. And if it really wants to build on its "new Geneva" momentum such fora should become almost a daily routine.