On 2 September, Russia vowed to revise and update its national Military Doctrine by the end of 2014. The decision was a direct reaction to NATO’s plans for deploying a rapid-reaction force in Eastern Europe, a move to be finalised at the summit in Wales this week.

In a speech in Tallinn on 3 September U.S. President Barack Obama announced plans for additional U.S. Air Force units to be based in Estonia.

NATO's increased presence in Eastern Europe may inject new energy into Russia-Belarus military cooperation. Pivotal for defending Russia's western borders in the event of conflict, Belarus could soon turn from a buffer state into the Russian military's most forward post.

For nearly two decades, Belarus has successfully balanced Russian interests against the West's. While closer military cooperation could strengthen Minsk’s bargaining position with Moscow in the short run, it could eventually undermine Belarus’ multi-vector balancing strategy and restrict its freedom to act alone.

Friends and Foes According to Russian Military Doctrine

The revisions to the Russian doctrine would reflect “changing military dangers and military threats,” according to Mikhail Popov, senior official at Russia’s Security Council. In a recent interview with the Russian state news agency RIA Novosti, Popov called NATO’s expansion “one of the leading military dangers for the Russian Federation.” Indeed, all of Russia’s military doctrines – passed in 1993, 2000, and 2010 – recognised NATO as a threat.

Yet the priority accorded to NATO as an enemy has increased over time. While the 1993 and the 2000 doctrines mentioned “the expansion of military blocs and alliances to the detriment of the interests of Russian Federation” among external dangers, they did not name NATO explicitly.

In contrast, the 2010 document moved the threat of NATO to the top of the list of external threats. It explicitly mentioned NATO’s goal “to arrogate to itself the assumption of global functions in violation of international law, and to expand the military infrastructure of NATO nations to Russia’s borders including through expansion of the bloc.”

The 2014 revisions could also amplify the importance of the Russia-Belarus military alliance. This indeed has happened with each subsequent edition of the Russian doctrine. The 1993 doctrine did not contain any references to Belarus or other CIS states. The 2000 document briefly acknowledged that countries in the region implement a common defence policy. 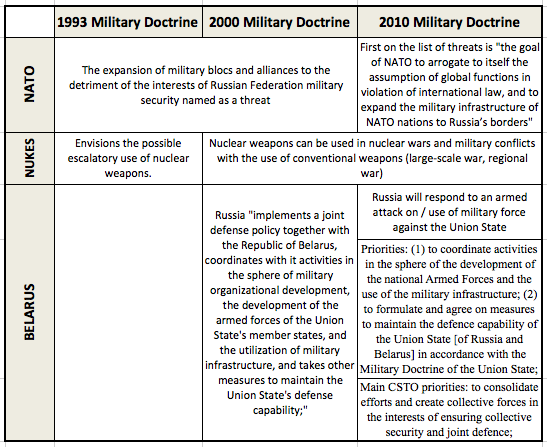 The 2010 doctrine, on the other hand, contains an explicit commitment to respond to an armed attack against the Union State of Belarus and Russia.

It lists the development of the armed forces and the maintenance of the defence capabilities of the Union State as top priorities for Moscow.

It also contains an additional clause regarding military cooperation within CSTO, which applies to Belarus and the four other CSTO members (Armenia, Kazakhstan, Kyrgyzstan, and Tajikistan).

Were NATO to increase its presence in the Eastern European states along Belarus’ border, Belarus’ role in Russia’s military planning would quickly grow in importance.

To date, Belarus has fulfilled primarily a symbolic role in Russia’s security. Its armed forces have remained small and military capabilities limited. Belarus’s defence budget (about $ 745 million) is more than 100 times less than Russia’s. In 2013, Belarus proved incapable of protecting the union-state airspace as it failed to register an amateur plane entering Belarus from Lithuania to distribute 800 teddy bears with human rights messages.

The military alliance may gain ground in its actual substance, however, as Russia-NATO tensions intensify. Russia may need Belarus to defend its Western borders. Belarusian territory is particularly useful for stationing Russian military posts and missile divisions, including the S-300 and S-400 anti-aircraft systems.

Russia has mulled the idea of establishing its first military airbase in Belarus. It would be located at Lida, close to the Lithuanian (35 km) and Polish (130 km) borders. So far, the terms of the base agreement remain up in the air. But the ongoing crisis in Ukraine could hasten the process of securing the base on Belarus' border with the EU. If so, Belarus could extract concessions in return for Russia's right to maintain a base on its territory.

An airbase in Lida would be Russia’s third military installation in Belarus. Moscow already operates an early-warning radar system near Baranavichy and a radio-electronic centre near Vileyka, which can be used for communications spying against NATO.

Since gaining independence from the Soviet Union, Belarus has published only two military doctrines. The 1992 doctrine, passed under the leadership of Stanislau Shushkevich, emphasised the nation's neutrality and envisioned the creation of a "nuclear-free belt" from the Baltic to the Black Sea.

Neutrality was absent from the 2002 doctrine, which prioritised the formation of “a single defence space with the Russian Federation.” Among the threats mentioned in the doctrine is the “enlargement of military blocs and alliances at the expense of military security of the Republic of Belarus and the counteraction of collective security systems pertaining to the Republic of Belarus.” This exact threat is also mentioned in the corresponding Russian doctrine.

Russia and Belarus have concluded over 30 binding cooperation agreements in the military-technical field, including the Treaty on Military Cooperation, the Agreement on Joint Efforts to Provide Security in the Battlefield, the Concept of Belarus-Russia Joint Defence Policies, the Concept of Security of the Belarus-Russia Union, and the Military Doctrine of the Union State.

Unsurprisingly, Belarus’ perception of security threats in the region has increasingly reflected those of Russia.

The End of the Buffer State?

Lukashenka has succeeded in extracting significant economic benefits by arguing that Russia’s military security depends on Minsk’s economic wellbeing. Even as the President has been careful not to side with Russia as the conflict in Ukraine has unfolded, he has continued to emphasise that, as Russia’s military ally, Belarus would have to react to an increase in NATO’s military capabilities on its borders.

Should Russia-NATO tensions continue to escalate, Belarus' buffer zone status would erode and its territory would be at Russia’s disposal.

The old, long-standing rumours that Russia may deploy Iskander missiles in Belarus could become reality if NATO establishes a greater presence on Russian borders following the summit in Wales on 3-4 September.

If the need should arise, Russia could also take direct control over components of Belarus' national defence system, as it has always sought to do.

Even if the Russia-NATO tensions are defused, Belarus’ dependence on the Russian economy and its membership in the Eurasian Economic Union leave it exposed to Western sanctions.