Corruption in Belarusian sport: the trend of five-year prison terms

Several corruption scandals shook Belarusian sport in 2016. They demonstrate that even Alexander Lukashenka's favourites are not safe from corruption.

Perhaps the most discussed case was the five-year prison sentence of Maksim Subbotkin, the General Director of the most successful ice-hockey club in Belarus – Dynama-Minsk, whom the court charged for embezzlement.

In spite of the fact that the Belarusian state prides itself on its achievements in fighting corruption, bribery remains widespread in all spheres of life, including sport. Moreover, corruption has become a part of the Belarusian political system. Corruption scandals perform an ideological function and serve to control the bureaucracy.

The story of Alexander Lukashenka's favourite club starts in 2003, when the Ministry of Internal Affairs decided to revive Dynama Minsk: the most successive Belarusian club during Soviet times. In the early 2010s, with a budget of around $20m, Dynama became the richest professional sport club in Belarus. Most profitable state enterprises, such as SC Belaruskali and the Mazyr Oil Refinery, subsidised the project.

Representing Belarus in the Continental Hockey League, Dynama became one of the most popular teams in the league, with an average attendance of more than 12,000 spectators per match. Lukashenka himself monitored the team's results and regularly criticised the club for poor performances. 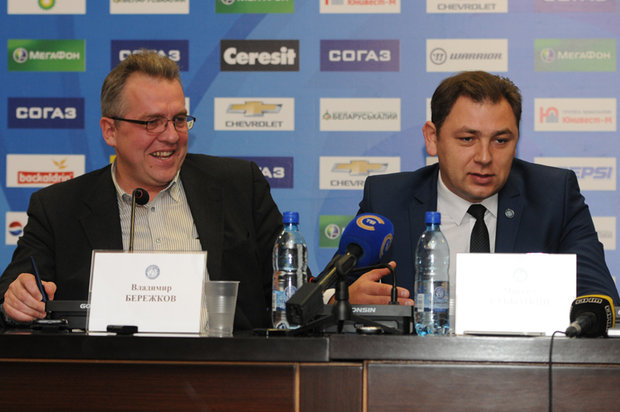 It might seem that such close attention from the head of state should render the club immune from corruption. However, in 2015, the club's top-managers became embroiled in a corruption scandal. After spending a year and a half in jail, in October 2016 a court sentenced ex-CEO of the club Maksim Subbotkin to five years behind bars.

Another top-manager of Dynama, Uladzimir Berazhkou, spent eight months in prison, but Lukashenka pardoned and released him after he re-paid $65,000 worth of monetary losses. Despite the corruption charges, the functionary got a position as head of the Department of Marketing and Communication in the Belarusian Football Federation immediately after his release.

Maksim Subbotkin also compensated monetary losses amounting to $150,000, but the president denied him clemency. According to the investigation, Subbotkin had used his subsidiary company, Dynama-Marketing, to misappropriate funds. Moreover, the ex-general director had 'employed' Berazhkou’s teammate Leanid Sagyndykau in his club when in reality he did not work there. Berazhkou handed his salaries to Subbotkin.

It should be mentioned that in spite of their repayments, neither top-manager fully admitted his guilt. Subbotkin even denied the charges and appealed the sentence.

The Dynama Minsk corruption case received considerable attention in the media, but this was not the only large corruption case in Belarusian sport in 2016. Another top-manager, the ex-general director of the Basketball club Tsmoki-Minsk, Kanstantsin Shereveria, received five and a half years in September 2016. The functionary will also have to pay $180,000 worth of damages. 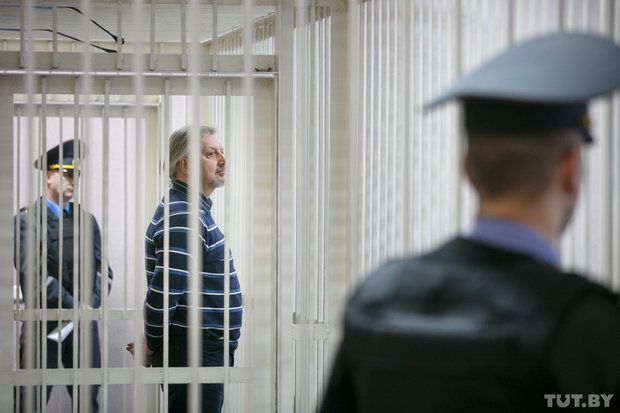 The court accused the manager of the largest Basketball club in the country – which has an annual budget of $2m – of misappropriation. According to the investigation the manager had misappropriated players’ salaries and organised his birthday party using club funds. However, Sheveria, a club founder and former basketball player, denied the accusations, claiming that he had used all appropriated funds for club development.

The latest corruption scandal in sport occurred in the Belarusian Football Federation. In January 2017, head of the Judiciary Department Andrei Zhukau received five years imprisonment for bribery. The investigation revealed that between 2014 and 2016 he had enriched himself by $650 and a bottle of Cognac. He had received these small bribes from referees and coaches as a reward for referee appointments on Belarusian football league matches.

Corruption as an element of the political system

In 2015, Belarus came 107th in Transparency International's corruption index. Nevertheless, the state media characterise the fight against corruption as one of the most significant accomplishment of the Belarusian authorities. Alexander Lukashenka intends to preserve the image of corruption fighter, which he created in the very beginning of his rule. The Belarusian media cover the corruption cases of highly-placed functionaries, top-managers, and businessmen in great detail. Such trials remain commonplace in Belarus.

With rare exceptions, the state owns and sponsors all Belarusian sport clubs. The way sport clubs are managed is not significantly different from state-owned factories. For that reason, clubs are as vulnerable to corruption as other state enterprises. Even projects as special as Dynama are not spared.

On the other hand, given the non-independent nature of the judiciary system, it is impossible to be fully confident as to whether the defendants are guilty or not. The number of acquittals in Belarus raises doubts about the independence of the judiciary. Acquittals occur less than half a per cent of the time, much less than in the EU and even in neighbouring Russia and Ukraine. Furthermore, most functionaries accused of corruption plead not guilty.

In the machinery of the Belarusian state, highly sensitive to corruption, almost any civil servant can be accused of bribery and receive a five-year prison sentence. Corruption cases in sport illustrate the overall situation in public administration and state-owned enterprise management. As these trials show, arbitrage practises do not distinguish between $150,000 losses and petty bribes. Both kinds of crime lead to equal punishment.

Such a system is very expedient for Alexander Lukashenka personally. It fosters his image as a corruption fighter and allows him to keep officials and managers on a short leash. According to the law, the Belarusian president can pardon his subordinates imprisoned for corruption if they compensate for the losses. Very often, he even offers positions to newly released functionaries, as was the case for Uladzimir Berazhkou. These powers give the head of state unlimited possibilities for control of the bureaucracy.

Last month Belarusian authorities continued their offensive against independent media. An amendment to the media law, in force since 1 January, tightened the state's control over the Internet.

Eight days later, the state ordered the confiscation of profits from an independent publisher (Lohvinau). On 19 January the Ministry of Information used the tragic shooting at the French satirical newspaper Charlie Hebdo to warn its domestic media of the risks of free speech. And on 26 January the Supreme Court rejected an appeal by the independent newspaper Narodnaya Volya against the Ministry of Information’s warning.

Information control has long been Minsk’s preferred approach to coping with economic problems and swaying public opinion ahead of elections. While independent newspapers can be easily purchased in the street and all websites are accessible from home computers most of the time, the state frequently harasses media outlets so they know “who the boss is." This time, however, its heavy-handed approach may inadvertently strengthen the influence of Russian media in Belarus.

Tightening Grip over the Internet

As a growing number of Belarusians seek information online, the Belarusian state has sought to limit dissent in the Internet. The amendments to the 2008 law on the Media that came into force on 1 January seeks to regulate the distribution of media products online.

They also expand the state's power to block Internet resources. While previously only the propaganda of war, violence, cruelty, or extremism could be blocked, now any information that can harm Belarus’s "national interests" may trigger the shutting down of a website.

Materials published as far back as three months can serve as grounds for blocking. As Andrei Bastunets, Deputy Head of the Belarusian Association of Journalists, notes in a 23 January article in Foreign Affairs, a broad interpretation of the law would put even foreign websites within the reach of state censors. Additionally, web hosts can now be held accountable for all comments posted on their websites.

The changes were adopted without public discussion and supplement the legislation that has already left little space for freedom of speech. Starting in 2010, customers at Internet cafes were required to present passports and register. In turn, Internet providers had to collect customer information and install search and surveillance systems. Websites catering to Belarusians had to be hosted exclusively on domestic servers. 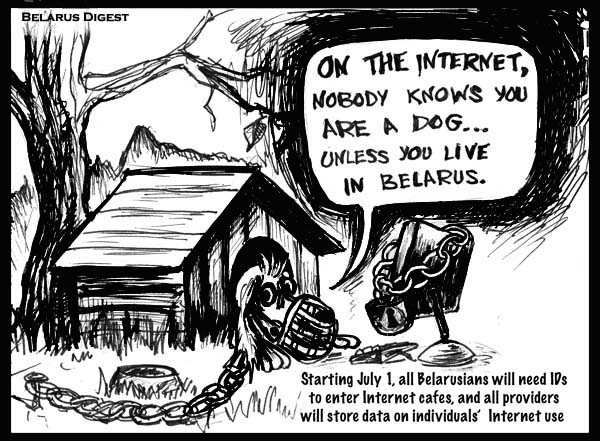 While seeking to rein in independent media, the state is stepping up its own online presence. Minsk is about to launch an online media portal aggregating information from all governmental media on the Internet.

The portal is supposed to serve as a “source for all professional information” about Belarus, according to Deputy Information Minister Vladimir Martusevich. Unsurprisingly, independent media outlets were not invited to join.

The new focus on Internet censorship is not distracting the Belarusian authorities from their harassment of print media.

On 3 October 2014, Narodnaya Volya received a warning for the column “Chained,” written by senior editor Svetlana Kalinkina. Kalinkina wrote that Belarus would be unable to leave the Eurasian Economic Union (EEU) upon ratifying the agreement, citing Article 13 of the Union Treaty that stipulates that withdrawal decisions are made by "consensus minus the vote of the Member State" seeking to leave.

“Once you sign up – it's forever,” she concluded, thus drawing the ire of the Ministry of Information. The Ministry pointed to conflicting article 118 of the ratification agreement.

As this was already Narodnaya Volya's second warning, the Ministry of Information can exercise its “legal” right to shut down the paper.

At President Aleksandr Lukashenka's 29 January meeting with the press, the newspaper's editor-in-chief, Iosif Seredich, complained directly to the President about the harassment his newspaper had suffered at the hands of the Ministry of Information. Lukashenka said he would look into the matter and went as far as to promise to meet with Seredich personally.

In its attempt to control information, Belarus did not hesitate to exploit the shooting at Charlie Hebdo on 7 January. Although the Ministry of Information did not explicitly prohibit reprinting the caricatures, it later threatened to “analyse” the domestic media’s “reaction” to the events in Paris. On 19 January, Minister of Information Lidia Ananich said at an online conference that outlets reprinting the cartoons would be “publicly reprimanded.”

Were the “public reprimand” to take place, it would affect kuku.org, which reprinted some of the most controversial images, and Vitebskiy Kurier, which published some of Charlie Hebdo’s earlier caricatures.

What is more, three participants of the solidarity action with Charlie Hebdo in front of the French embassy in Minsk on 11 January were charged with participating in an “unsanctioned mass action.” Interestingly, when asked about the charges by BBC journalist Tatsiana Melnichyk at the 29 January press conference, Lukashenka said he did not consider a four-people action problematic and promised to look into the matter.

Three days later, the court proceedings for the former editor of the satirical newspaper Novinki Pavel Konovalchik, the leader of the United Civic Party Anatoly Lebedko, and the deputy of the Green party Dmitry Kuchuk were cancelled.

Such an unexpected denouement suggests that the president has decided to play good cop, leaving the bad cop role to the Ministry of Information. Lukashenka's ostensible concern about Narodnaya Volya at the same press conference confirms this impression. 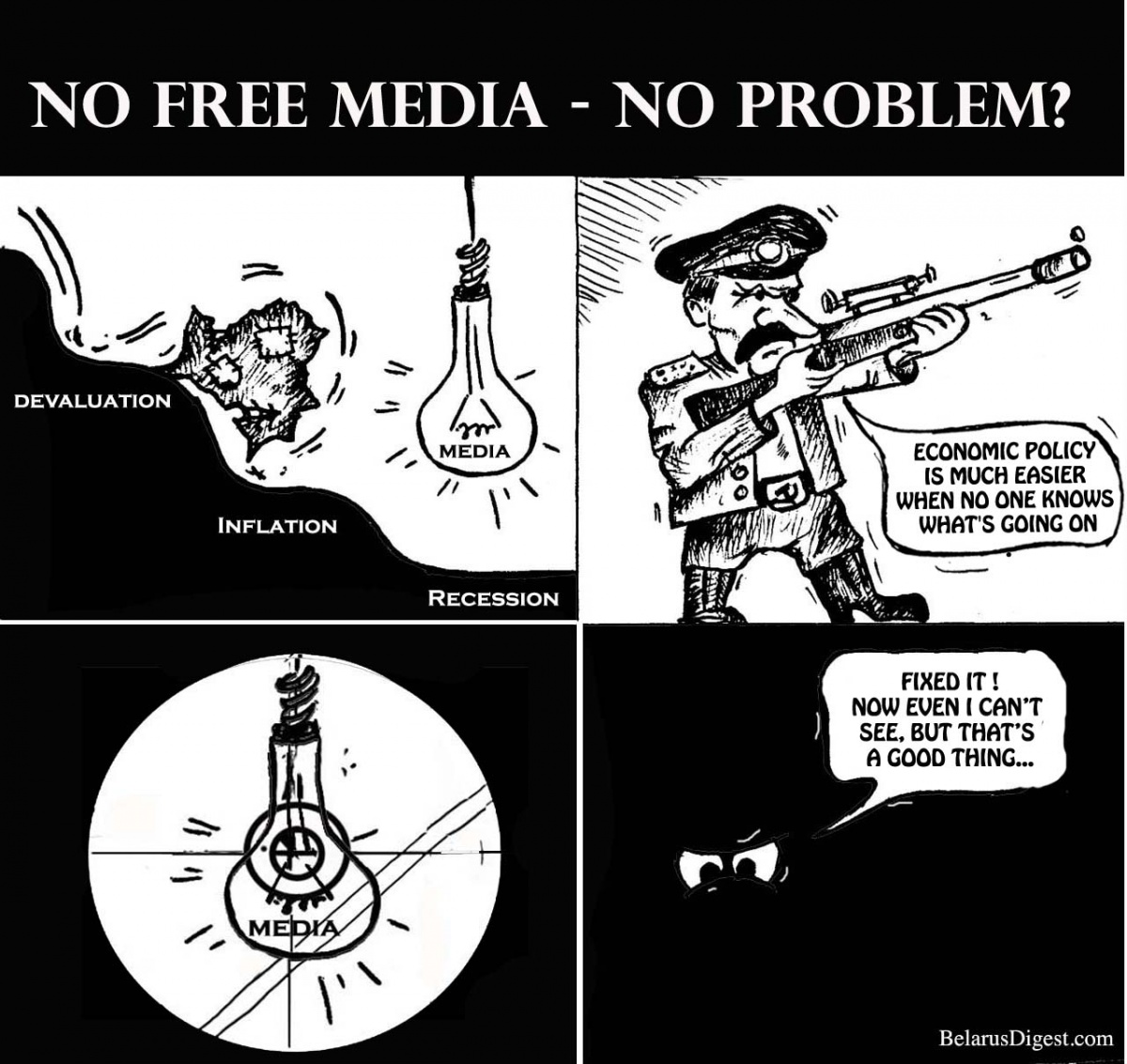 Media outlets that reprint controversial images in Belarus have been prosecuted before. In 2006, the independent newspaper Zgoda published Jullands Posten’s cartoons of Muhammed. One of its editors, Alexander Zdzvizhkou, was sentenced to three years in prison "for “inciting racial, national or religious hatred" but released after a month.

The intensification of media control can be seen as Belarus's preparation for the presidential election on 15 November. A contributing factor is the poor state of the Belarusian economy, which may follow that of Russia into a recession in 2015. Real wages are declining and the ruble has plummeted.

As soon as the government slapped a 30% tax on foreign currency purchases in December, several non-governmental informational resources were blocked. It is precisely such ad hoc solutions to economic turbulence that the amendments to the media law facilitate.

Yet today it is Russian state media, which propagates the idea of Belarus's belonging in the Russian world, that presents a more immediate challenge to Lukashenka's rule. Restricting Belarusian independent media in the current geopolitical circumstances may thus inadvertently strengthen the increasingly aggressive Russian influence.