Belarusians in Ukraine Conflict: Freedom Fighters or the Far-Right?

On 5 December, Ukrainian President Petro Poroshenko awarded a Ukrainian passport to Belarusian citizen Sergei Korotkich for “courageous and faithful service” on the battlefield.

Korotkich’s dubious past, which includes leading a neo-fascist organisation in Russia and participating in a crackdown on Belarusian pro-democracy activists in the 1990s, highlights the thin line between patriotism and far-right views of foreign fighters in the Ukrainian conflict.

As a growing number of Ukrainians seek refuge in Belarus, Belarusians are crossing the border in the opposite direction, to join fighters on one or the other side of the conflict. On the battlefield, young people seeking to defend Ukraine's independence may find themselves side-by-side with extremists driven by ultra-nationalist ideology.

Perhaps the largest number of Belarusians – between 50 and 60, according to various news sources – joined the all-Belarusian unit Pahonia. Upon receiving military training in western Ukraine, Pahonia members joined a variety of Ukrainian units fighting in the anti-terrorist operation zone.

On its Facebook page, Pahonia calls Ihor Guz, elected from Verkhovnaya Rada in November 2014 as the People’s Front candidate, its “godfather” for his support with organising the unit. 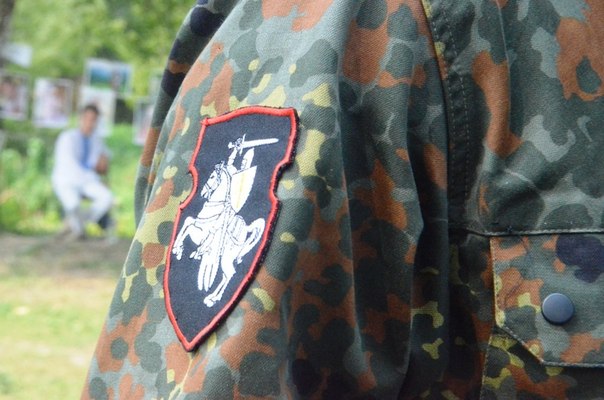 In a September interview with Belarusian newspaper Nasha Niva, Guz emphasised the propagandistic role played by the Belarusian fighters. He explained that “they demonstrate that Russian aggression is the problem not only for Ukraine, but also for other countries.”

Belarusian activist Tatsiana Elavaya helped finance equipment for the unit through a PayPal campaign. Pahonia’s VKontakte web page includes 1,448 members, and its Facebook page has 1,505 likes. The organisation's social media pages warn users to submit questions about joining the organisation via email because the “secret services are not sleeping.”

Several members of Malady Front, a centre-right Belarusian youth organisation, have reportedly joined the unit. Interviews with Nasha Niva suggest that they see Russia as a common threat for Ukraine and Belarus and frame their goals in anti-imperialist terms.

Dubious Past of the First Belarusian Fighter to Obtain Ukrainian Citizenship

Also known as Maliuta, Korotkich formerly led the far-right organisation National-Socialist Society and participated in the neo-nazi Format-18 in Russia. Members of these organisations were charged with multiple murders of people of Caucasian, Asian, and African descent.

According to Radio Liberty, while in Belarus, Maliuta participated in the radical nationalist organisation Russian National Unity. Maliuta’s friend Valery Ihnatovich is currently serving a life sentence for the murder of Belarusian journalist Dmitry Zavadsky.

Today, Maliuta heads the intelligence unit of Azov Battalion, one of several paramilitary units fighting on the Ukrainian side. While his decision to fight on the Ukrainian side may seem out of character, he fits right in with other extremist and even neo-nazi Azov volunteers. In mid-July 2014, for example, BBC reported that a Swedish white supremacist sniper, Mikael Skillt, joined the fighting as well.

Belarus Digest contacted the battalion's press secretary. He refused to share how many Belarusians fight in the battalion and was unavailable for further comments.

Maliuta’s fame as a newly minted hero has evoked mixed reactions in Belarus. Some view the incident as unavoidable in wartime, while others suspect involvement by the KGB, Belarus's intelligence service.

Tatsiana Elavaya, a political activist who coordinates fundraising for the Pahonia unit, posted in her Facebook account that “not only idealists and romantics travel from Belarus to Ukraine.” She wrote, “Some of these people – intentionally or not – discredit all the Belarusians who help Ukrainians to protect their independence.”

Dzianis Ivashin, a civic activist from Hrodna who regularly visits Ukraine views Maliuta's fame as the first Belarusian to obtain a Ukrainian passport for defending the country's independence as “a provocation to the entire democratic community in Belarus.” In an interview with Belаrus Digest, Ivashin said that the Belarusian KGB might be using Maliuta to advance their goals.

Far-right Friends Fight on Both Sides 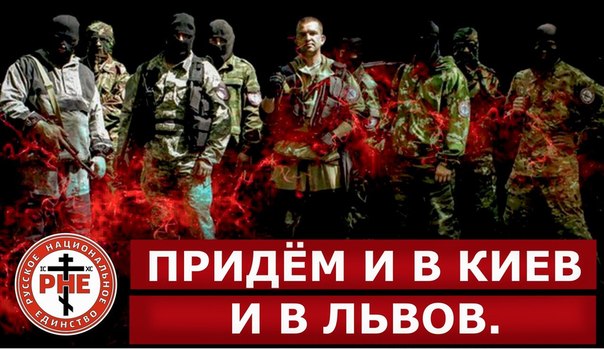 Alyaksandra Dynko, a Belarusian journalist who has visited Ukraine to cover the conflict, views the far-right views of the pro-Ukrainian fighters as less worrisome than the radical beliefs of the organisations on the pro-Russian side. She told Belarus Digest that Belarusian supporters of such groups as Russian People’s Unity National-Bolshevik Party, Restrukt and Farmat-18 now fight on the side of the separatists.

The Belarusian branch of Russian People’s Unity indeed issued a call for volunteers for the “Orthodox Army of Donbas.” The group counts 1,250 members on its VKontakte account.

How many Belarusians fight on the side of the separatists remains unclear, but their numbers likely compare to the number of Belarusians who joined the Ukrainian side.

Among them is Natalia Krasoŭskaja, who in July claimed that the Belarusian people all back the Donetsk People's Republic in an online video.

Belarusians who rally for Ukraine’s independence perceive those who fight on the pro-Russian side as traitors.

“I cannot understand those who ‘protect’ the so-called ‘New Russia’ … or whatever they call it … This is imperialism of the brain,” said Valiancin Tsishko, a resident of Maladzechna, in an interview with Belarus Digest. Tsishko left Maidan one day before violent skirmishes broke out. 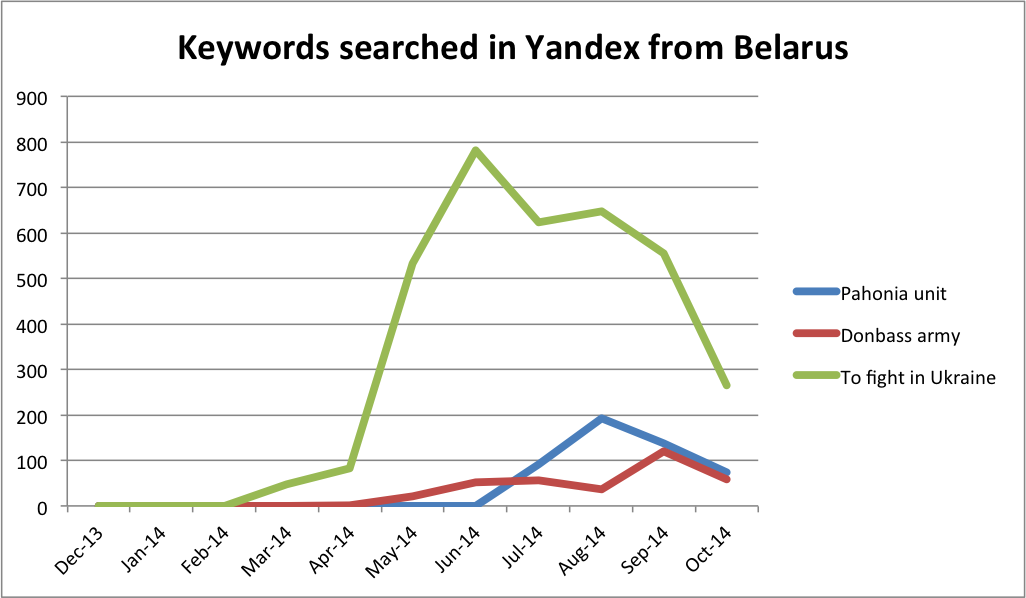 Monthly keyword trends provided by the search engine Yandex suggest that volunteer units Pahonia and the Orthodox Army of Donbas generated similar levels of interest in Belarus in September-October 2014. Searches with keywords "fighting in Ukraine" and "volunteer fighters in Ukraine" peaked in May 2014 at 800 queries, but declined considerably this fall.

While keyword statistics hardly reflect Belarusians’ willingness to fight on either side of the Ukraine conflict, they do speak to the general awareness of the possibility of engagement. Some 52% of Belarusian users visit Yandex.by, according to Gemius, a digital consulting company headquartered in Poland.

An Enemy of Our Enemy is Our Friend?

Reacting to the uproar in the Belarusian media, an advisor to Ukraine's Internal Affairs Minister recently defended the Belarusian fighter Karatkich in a Facebook post. Anton Gerashchenko accused critics of sitting at home doing nothing while Karotkich “storms terrorist headquarters.” Gerashchenko concluded that “Maliuta” above all others deserves Ukrainian citizenship because he sacrificed his life to protect Ukraine.

While plenty of young Belarusians are sincere about fighting for Ukrainian independence, the armed struggle will continue to attract extremist characters like Korotkich from Belarus and all over the world.

Radicalism and the willingness to die for one’s values may be necessary to win the Ukrainian war, which explains why the Ukrainian leadership supports even the ultra-nationalist paramilitary units fighting on the Ukrainian side. In times of peace, however, the presence of such ideologically extreme fighters is a liability – for democratic and authoritarian regimes alike.