Decommunisation or erasing historical memory: Will Poland rename a street given to a Belarusian national hero?

Poland has entered a new stage of its decommunisation policy, which among other things aims to rename streets and avenues all over the country. Within the framework of this policy, some Polish historians have proposed renaming Branislaŭ Taraškievič Street in the town of Bielsk Podlaski.

This may turn out to be an international scandal between Poland and Belarus, just like the one earlier this year around Tadeusz Kosciuszko, an influential Belarus-born military engineer during the 1776 American War of Independence and a rebel leader against Tsarist imperialism. Branislaŭ Taraškievič is an undisputed hero in Belarusian history, especially for Belarusian minority in Poland.

Branislaŭ Taraškievič  (Bronisław Taraszkiewicz) is considered to be one of the “fathers of the Belarusian nation”. Born in 1892 in a small village 30 km from Vilnia (now Vilnius) he graduated from the Vilna Gymnasium, and then from the History and Philology Faculty at St. Petersburg University. In 1918, he wrote and published the first “Belarusian grammar for schools” in Vilnia. For a long time, this was the main textbook on the Belarusian language. His work withstood six reprints, and it was used even after the 1933 reform of Belarusian spelling—now this type of spelling is called “taraškievica”.

In the interwar period, Branislaŭ Taraškievič headed the Belarusian grammar school in Vilnia (which was a part of the Polish Republic at that time) and was elected a deputy to the Polish Sejm. In the first years of his work in the Polish parliament, he advocated a union for the Polish and Belarusian peoples. He hoped that the Belarusians would be able to gain autonomy in Poland. 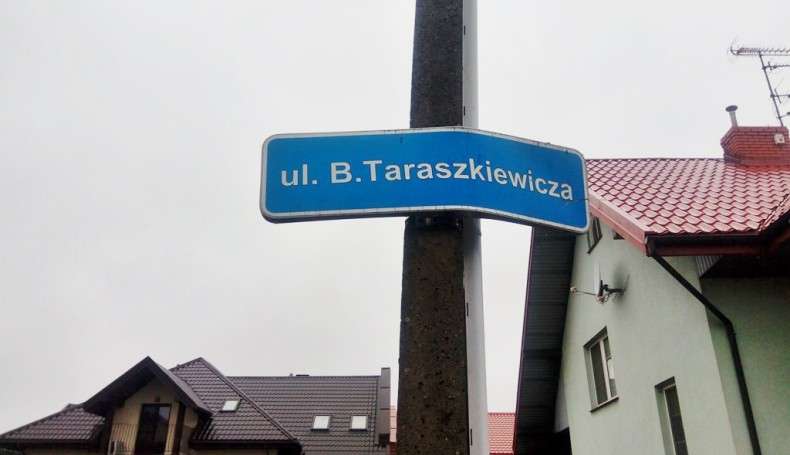 After a couple of years, he became disillusioned with the idea of a Polish-Belarusian union. He made ties with Belarusian Communists and joined the ranks of the Communist Party of Western Belarus. This constitutes the reason for his persecution by the Polish authorities. At that time, the Belarusian Soviet Socialist Republic (part of the USSR) was conducting a “Belarusisation” policy aimed at promoting Belarusian national culture and traditions. This attracted many Belarusians in Poland and became a reason for the popularity of communist views among them.

The Polish authorities arrested Branislaŭ Taraškievič in 1927 and then for a second time in 1931. In 1933 Poland exchanged him for Belarusian playwright Francišak Alachnovič within the framework of an exchange of political prisoners between Poland and the USSR. In the USSR, Taraškievič worked as head of the department of the Baltic States and Poland at the International Agricultural Institute in Moscow. In 1937, the Bolsheviks arrested him in Stalin’s Great Purge. He was executed in 1938. The Soviet “court” accused him of counter-revolutionary activities and nationalism.

On 2 November 2017, the Polish media announced that Branislaŭ Taraškievič Street in Bielsk Podlaski comes within the purview of the decommunisation law and the city council should rename it. Curiously, the original list of places to be decommunised, published by the Polish Institute of National Remembrance (PINR), did not include Taraškievič. His name only appeared on the list later at the insistence of the PINR Warsaw branch and some government officials. However, the PINR has yet to give any reason for Taraškievič’s inclusion on the “decommunisation list”.

According to unofficial sources, Governor of Podlaskie province in north-east Poland Bohdan Paszkowski played a big role in putting Taraškievič up for decommunisation. Paszkowski is a member of the ruling conservative Law and Justice Party, which takes a strong anti-communist position. For example, at present, they are discussing the demolition of the massive Palace of Science and Culture in the centre of Warsaw. The Palace is both the most well-known landmark in the city and the tallest building in Poland.  The Law and Justice Party says the Palace represents the communist past, being a post-war “present” from the USSR to Warsaw. 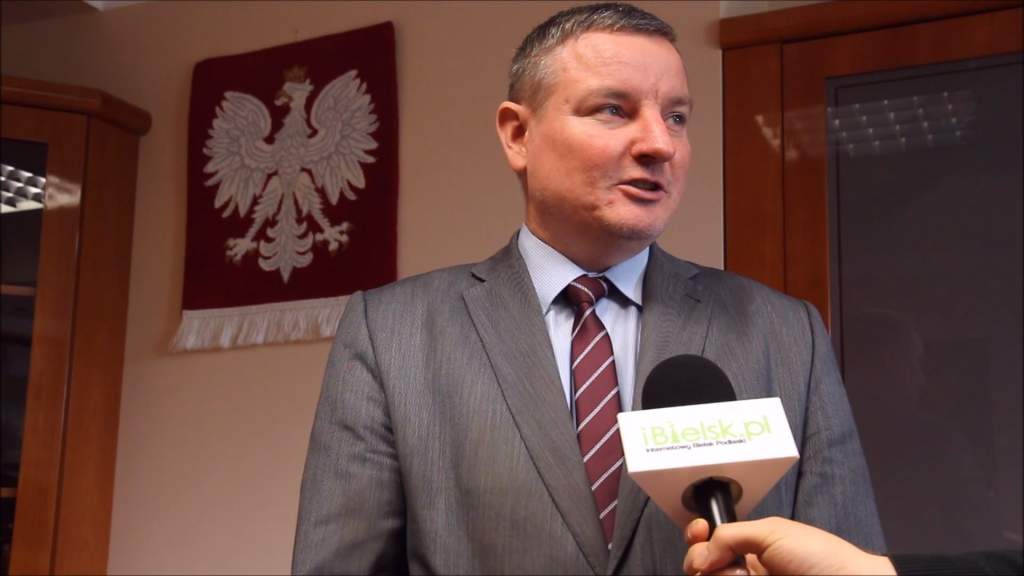 Indeed, located near the street in question, the  Lyceum No. 2, a school that teaches Belarusian language in the town, is named after Branislaŭ Taraškievič. So far, there has been little to no discussion surrounding the need to rename the street. But one can expect this issue will possibly arise in the near future.

It should also be noted that the PINR branch for Podlaskie province believes Taraškievič is not a person subject to the decommunisation policy. There is still a chance the street in Bielsk Podlaski will keep its name if historians at the highest level of PINR come to the same conclusion. In the meantime, Belarusian society wants the Belarusian Foreign Affairs Ministry to help in resolving the situation.

Branislaŭ Taraškievič also played a role in the history of Podlaskie province. The province happens to be the main settlement area for Poland’s Belarusian minority. Throughout history, these lands belonged to the Grand Duchy of Lithuania, the Reč Paspalitaja (or Rzecz Pospolita, the Commonwealth of the Polish Crown and the Lithuanian Grand Duchy), the Russian Empire, and then the Republic of Poland. The Belarusian population in Podlaskie province is almost 100 percent indigenous. Belarusians represent 50 percent of the population in the town of Bielsk Podlaski and more than 60 percent in a couple other regions within Podlaskie province. 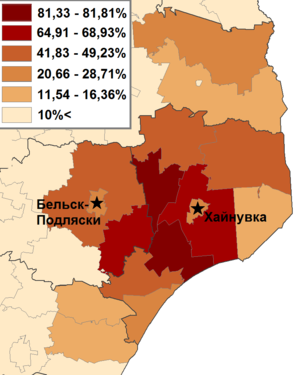 A map showing the percentage of Belarusians in the regions of Podlaskie province.

Belarusian historian and scientist Arsień Lis states that Taraškievič cooperated with communists in Poland for tactical reasons. It could have helped to defend the rights of the Belarusian minority, which suffered forced assimilation attempts by the Polish state in the 20s and 30s.

For example, in 1938 officially sanctioned Belarusian schools ceased to exist in Poland, when in 1919 there were more than 400 of them. Moreover, in the 20s and early 30s communism had not compromised its image by mass murders and terror against populations in communist states, which further explains Taraškievič’s willingness to cooperate.

More to the point, Branislaŭ Taraškievič had nothing to do with the communist Polish People’s Republic, which formed only after WWII and after repressions against Polish civil society began. The Soviets killed him even before the start of WWII. But Branislaŭ Taraškievič Street in Bielsk Podlaski received its name in 1987, while Poland was still under communist rule.

After concern over the street renaming was covered in Belarusian and Polish media, as well as the negative reaction from Poland’s Belarusian minority, PINR issued an official statement. PINR Head Jarosław Szarek stated his readiness to organize a meeting of Polish and Belarusian historians dedicated to the issue of Branislaŭ Taraškievič’s legacy. “This discussion should be based on historical documents, and we are ready to listen to the opinion of Belarusians,” he said.

Such an approach to the issue, as well as the decision of the Podlaskie province PINR branch, give hope that a compromise on Branislaŭ Taraškievič Street will finally be found.

The Center for Belarusian Studies at Southwestern College (Winfield, KS) invites undergraduate and graduate students to participate in its first International Summer School for Belarusian Studies from July 6 to August 7, 2009. The program, to be co-sponsored by the Poland-based Belarusian Historical Society, will be held at the Belarusian Lyceum in the town of Hajnówka in the Podlasie region of northeastern Poland, an area of great natural beauty and home to Poland’s ethnic Belarusian minority — an ideal setting for the study of Belarusian language, history and culture, as well as for the study of a broad range of issues relating to cultural diversity and minorities policies in the expanded EU.

Coursework will include intensive Belarusian language instruction (beginning and intermediate levels and individual advanced-level tutorials) and lectures in English and Belarusian on Belarusian history, literature, contemporary politics and society. The program will also include a regional studies component, with lectures and events focusing on the history, culture and current status of the Belarusian minority in Poland, as well as of the Podlasie region’s other ethnic groups, including Poles, Jews, Tatars, Lithuanians, and Russian Old Believers. Faculty will include instructors from Białystok University and the Belarusian Lyceum in Hajnówka, as well as Hrodna University in Belarus. Additional guest lectures on Belarusian history, politics and culture will be given by visiting researchers from Europe and North America. Students will have a choice of dormitory accommodations at the Belarusian Lyceum, or homestays with Belarusian-speaking families in Hajnówka.

Coursework will be supplemented by a rich and diverse cultural program, including visits to Belarusian minority cultural organizations and media outlets, meetings with Belarusian writers and artists, films, concerts, theatrical performances, and excursions to important sites related to Belarusian and Orthodox culture and other attractions of the Podlasie region: the city of Białystok, the recently restored Orthodox monastery in Supraśl, the Białowieża (Belaveža) National Park (the largest and ecologically most diverse remnant of the primeval forests of the Northern European plain), the historic town of Bielsk Podlaski, the Holy Mountain of Grabarka (the most important Eastern Orthodox pilgrimage site in Poland), and the Borderland Foundation in Sejny, a unique institution dedicated to preserving the rich multicultural heritage of the borderland region and promoting dialogue and new forms of cooperation between its many ethnic groups and cultures. In mid-July students will also have the opportunity to attend Basovišča, the annual festival of Belarusian rock music organized by the Belarusian Students’ Association in the town of Gródek (Haradok) east of Bialystok.

At the end of the program, from August 8-19th, students will have the option of traveling to Belarus on a tour including Hrodna, Navahrudak, Slonim, Niasviž, Mir, Minsk, Połack, Viciebsk, Mahiloŭ, Pinsk and Brest. The program cost, including tuition, room, board, cultural program and excursions is $2,900 (the cost of the optional Belarus tour at the end of the program will be announced as details become available). For further information and application materials, please contact the program director: Dr. Curt Woolhiser, Harvard University, Department of Slavic Languages and Literatures, Barker Center 327, 12 Quincy St. , Cambridge MA 02138-3804; e-mail: cwoolhis@fas.harvard.edu; tel. (617) 495-3528. Please note that the due date for all applications is May 15, 2009.