On 17 November 2017, the official statistical body of Belarus, Belstat, announced that GDP growth for ten months of the year has reached a new high outscoring the previous month’s record.

However, state-owned enterprises are still unable to significantly improve their cost-effectiveness, which delivers additional pain to their creditors threatening the banking stability of Belarus. For great business banking options and guidance visit www.wecu.com/business-banking/.

In the meantime, on 23 November 2017, the Belarusian President Alexander Lukashenka has signed a presidential decree aimed at improving Belarus’s business climate.

According to Belstat, from January–November 2017, GDP growth continued and reached 2 per cent year on year (see Figure 1). The main contributor to economic growth remains to be exports supported by increased demand within Belarus’s traditional external markets. 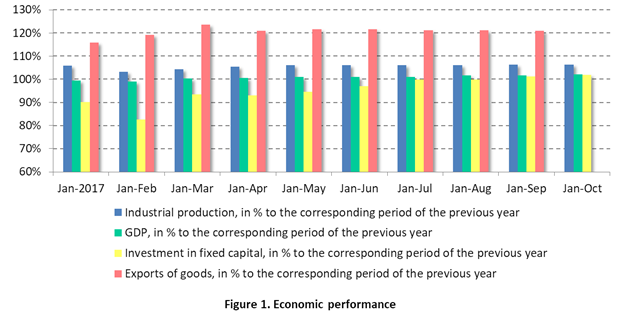 In particular, foreign counterparts (for example, China) display a belated interest in certain Belarusian goods, mainly potash fertilisers, as well as a range of capital goods exported to Russia. As a result, the figures of the first nine months of the year indicate that export of goods has increased by 20 per cent.

Correspondingly, industrial production is steadily recovering. The effect of “belated” external demand plays a crucial role here. Domestic demand, on the other hand, is mostly negated by the associated growth of imports for intermediate goods.

Additionally, Belarusian families are gradually restoring their consumption levels comparable to the “rich” years of the 2000s. This happened mainly because households started to believe that recession in the economy has ended, which subsequently will lead to growth in their real incomes.

However, the reverse side of increased consumption means the growth consumer goods imports.  For many households, the normalization of consumption also means more imported goods in their consumer basket.

Finally, another major component of GDP—capital investments—has also grown. After a downturn in the first half of the year, capital investments have gained in size and number. In October, they grew by 2 per cent year on year.

The state-owned enterprise sector remains the key challenge for Belarus’s economy. In 2015–2016, devaluations of the national currency and government financial rehabilitation efforts combined to reduce costs for Belarusian firms. In addition, low domestic demand for imports (in comparison to the past two years) gave some “fresh air” to improve export competitiveness.

However, without permanent state support, a large number of the state-owned enterprises (SOEs) would be unable to sustain operations or generate profits. State directed redistribution of resources limits capabilities for the development of efficient firms and the economy in general.

For example, Jaroslav Romanchuk, Executive Director for Strategy, an analytics centre, notes that 60 per cent of agricultural enterprises and a quarter of industrial enterprises remain unprofitable and are unable to survive without state support. Moreover, Romanchuk says that half of all construction organizations work at a loss.

These inefficiencies compound the increasing inability of state-owned enterprises to repay their debts. This results in budget coverage of their obligations and investments in fixed capital (see Figure 2). Since 2015, Belarusian enterprises have demonstrated a steady decline in the acquisition bank loans with a corresponding build up of overdue debts, which consequently threatens the financial stability of the entire banking system. 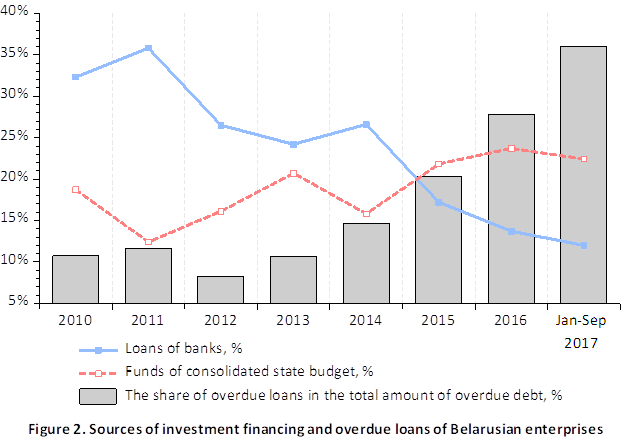 The trends described above—a fall in issued loans, and rises in overdue loans and consolidated state budget funds—happened, first of all, due to the high cost of capital for SOEs during the past two years of economic recession. Second, the inefficiency of investment modernization programs from previous years failed to deliver substantial profits.

In a major change, the decree introduces a notification system for businesses engaging in activities such as, among others, consumer and tourism services, trade, food services, passenger transportation, and the production of building materials.

This means that a business may merely notify local authorities of its plans to start engaging in such activities, which requires the filling out of electronic form, and then it can begin operations the following day. Additionally, the decree shortens the list of mandatory operational requirements for businesses, removing many sanitary, environmental, and other regulations that have manifested into business-stifling red tape.

The result is that Belarus currently ranks 38th in the World Bank’s Ease of Doing Business 2018—a drop of only one position in comparison with the previous year. World Bank experts have noted the downgrade occurred due to a drop in the tempo of legislative reforms intended to improve conditions for entrepreneurship in the country.

Additionally, World Bank expert and co-author of a study into the Belarusian economy Valentina Saltane argues the second factor that limits the attractiveness of doing business in Belarus, in particular, is the high tax burden for businesses. According to Saltane, Belarus ranks 96th in the world in terms of taxation weight (the first place being the least burdensome).

The overall rate of taxes and duties in relation to an organisation’s profit in Belarus is 52.9 per cent. For example, in Europe and Central Asia this figure hovers around 33.1 per cent. In high-income OECD countries, the ratio reaches 40.1 per cent. Therefore, Saltane concludes that Belarus should do more in order to reduce the tax burden.

Meanwhile, in 2016 President Lukashenka set a strategic goal for the government to reduce all types of production and sales costs by a quarter. The aim was to improve the competitiveness of the national economy. However, without reduction of the tax burden on business, this goal still seems unachievable.

Thus, in November Belarus’s economy has continued the growth of recent months. The rise in exports and industrial production are delivering positive economic prospects for the year. However, problems with the business climate and the cost-effectiveness of SOEs threaten the stability of the banking system and the sustainability of economic growth in the coming years.