On 14 November, key Belarusian arms exporter Beltech Export signed a deal with the United Arab Emirates (UAE). The Belarusian firm has agreed to maintain and modernise Emirati radars. This means that Minsk has successfully entered a new market, as it has never sold air defence-related products or services to Arab monarchies before.

This news, along with news of further remarkable international contracts entered into by Minsk this autumn, illustrates the silent evolution of the Belarusian defence industries. They have not only succeeded in developing new products – anti-tank weapons, rockets, missiles, armoured vehicles and others – and started selling them. They are also establishing cooperation with major foreign defence firms like the Chinese Long March aerospace corporation or the Turkish Roketsan missile firm. Such actions illustrate a promising development toward building autonomous national military industries and making the Belarusian state more economically viable.

The latest Belarusian deal – assessed at $15.7m – with the UAE military at the Dubai Airshow in November was widely seen as a coup for Minsk. The Dubai–based Khaleej Times has even listed it among the major contracts concluded at the Dubai Airshow 2017. After all, Belarus had participated in the airshow for the first time, yet Arab countries of the Persian Gulf were seen reluctantly buying non-Western defence products and services. 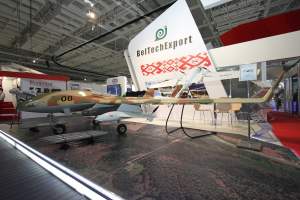 In addition, this February, Beltech Export won a contract worth some $14.4m to supply the Emiratis with spare parts, repair services and technical assistance for its Russian-manufactured BMP-3 armoured vehicles. Minsk not only won the contract over Russian arms firms, but the Belarusian offer has political implications, as well. After all, the UAE would currently prefer to avoid working with Russia yet it needs parts and support for its BMP-3s deployed in the Saudi-led intervention in Yemen.

Belarusian defence firms, and the state agencies responsible for them, have been regularly meeting their Emirati counterparts for around two decades. The latest conference of the defence industry officials from the two countries took place on 15–16 October. Belarusian president Lukashenka also paid a visit to the UAE between 25 October and 6 November, ostensibly to promote trade between the two countries, including trade in military equipment.

These contacts seem to have borne fruit. Moscow-based Nezavisimaya Gazeta reported that last year Minsk Wheel Tractor Plant (MZKT) successfully received an order for tank transporters without any tender. The delivery was due this year yet no details on the contract have yet been made publicly available. The MZKT has been selling such equipment to the UAE since the early 2000s.

Minsk also relies on arms deals to advance relations with Middle Eastern countries. It therefore came as no surprise that in 2013 Raman Halouchanka, the deputy chairman of the Belarusian state military industrial committee, was appointed as the Belarusian ambassador to the UAE.

Forthcoming breakthrough in relations with Turkey?

Some unprecedented results have also been achieved in relations with Turkey. Şuay Alpay, Turkey’s deputy defence minister, paid a visit to Belarus from 23 to 26 October. The Belarusian media has kept silent on the content of these negotiations. However, Turkish daily Yeni Ufuk reported that the Turkish defence official had expressed his satisfaction with the cooperation between Turkish and Belarusian companies on “rifle sights, inertial navigation systems for howitzers, electro-optic equipment, avionics, satellite cameras and land vehicles”. 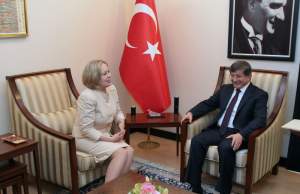 Indeed, he brought to Belarus a large delegation which included not only state military industries officials, but also managers of leading Turkish arms firms. Among them were Aselsan (radios, defence electronic), Roketsan (rockets, missiles, satellites), BMC (trucks and tactical vehicles), MKEK (ammunition and various weapons systems). Although Minsk and Ankara first signed an agreement on defence industrial cooperation in 1998, their cooperation effectively started in the late 2000s to coincide with Turkish president Erdoğan’s launch of his assertive foreign policy.

At the same time as starting new cooperation projects, the Belarusian government has worked to advance most of its old partnerships, most importantly the partnership with China. The President of China’s leading Aerospace Long-March International Trade Co., Shi Kelu, came to Minsk on 23 October. Minsk has for many years worked with Beijing in the aerospace arena, even choosing to launch its satellite with Chinese and not Russian help. The Belarusian government has also started its missile programme with China’s assistance after being denied new missile systems by the Kremlin.

The business and political interests of Minsk and Moscow collide in the most explicit way in former Soviet nations, especially in terms of relations between Belarus and Azerbaijan. On 8–10 October, Minsk welcomed Azerbaijani defence minister Zakir Hasanov. A military expert close to the Azerbaijani defence ministry Yaşar Aydəmirov told several Azerbaijani media outlets on 13 October that Baku should purchase Belarusian-made Palanez multiple-launch rocket systems. According to him, given Azerbaijan’s specific geographic and other advantages, Palanez systems would serve as an adequate response to Russian-made Iskanders deployed by Armenia.

Belarusian military technical cooperation with Central Asia reveals the same tendencies for entering new markets despite Moscow’s disapproval. A case in point is the recent move towards cooperation with Uzbekistan: a country which severed most of its ties with Belarus in the early 2000s. On 4 October, Moscow-based Kommersant daily revealed that the Belarusian 558th Aircraft repairs plant began the overhaul of four Su-25, close air support aircraft and four MiG–29, fighter jets owned by Uzbekistan. 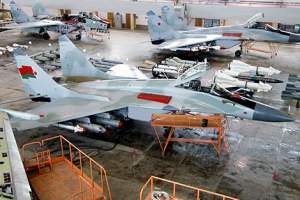 Moreover, there are reports that Belarusian firms are to receive contracts for the overhaul of another eight aeroplanes of this type. The 558th Aircraft repairs plant, based in the Belarusian city of Baranavichy, has signed the contract with Uzbekistan despite the fact that the latter had negotiated with the Russians concerning the overhaul of its aircraft in the spring of this year. Kommersant quoted a source from the Russian defence industries as saying that this deal between Minsk and Tashkent has caused “some consternation” in the Russian arms industry.

Uzbekistan is not the only post-Soviet country which has begun to choose Belarusian firms. From 24 to 26 October, the Commander of the air defence forces of Kyrgyzstan, Kylychbek Aydaraliev, also visited Belarus to discuss the possible overhaul and repairs of Kyrgyzstani aircraft, helicopters and air defence equipment in Belarus.

Minsk has to constantly take into account the Kremlin in doing arms business as Moscow dislikes the recent successes of its ally in diversifying its international contacts. Russian right–wing Regnum news agency published a commentary entitled “Mission impossible: Belarus seeks an alternative to Russia for its defence industries” on 14 November. Therefore, although Minsk hardly considers the development of its defence industries in cooperation with non-Russian partners or sales to new markets as a move aimed against Russia, the Russian establishment now sees such deals in exactly those terms.

Yet the Belarusian government is forced to act in this way in order to survive both politically and economically. Not only because Minsk would become a Russian satellite otherwise, but because the Kremlin is actively substituting Belarusian defence products and continues to insist that Minsk must sell its defence firms to Russia lest they go bankrupt without Russian support. So, Minsk has endeavoured to seek and find its own solutions: the examples above serve as irrefutable proof of that.