Going green: towards a zero-waste economy in Belarus

On 12 October 2016 Belarus announced its intention to adopt a national action plan for a green economy. This September the country also ratified the Paris Climate Change Agreement. What’s more, the European Union has invested over €​10m in a project aiming to fascilitate Belarus’ transition to a green economy.

What a “green economy” entails could be anything from simply recycling to increased use of renewable energy sources, all areas in which Belarus needs improvement. According to some calculations, the average Belarusian produces 1–1.5 kg of garbage per day. This adds up to roughly 300kg of garbage a year. In Belarus, only about 12% of this amount will be recycled. The rest goes to landfills.

Belarus is a country lacking its own significant energy and fuel resources. It therefore relies heavily on imported crude oil, natural gas, and peat. However, almost all existing energy resources within the country are renewable: water, wind, solar energy, and biomass. Therefore, it would be logical for Belarus to invest primarily in the development of renewable energy sources.

And yet according to Naviny.by, in 2015 only 5% of energy in Belarus came from renewable sources. The government plans to increase this number to 6% by 2020. The is nevertheless a negligible margin compared to the neighbouring EU’s plans to spike at 20% by 2020. 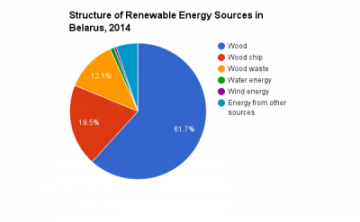 such sources. Almost 93% of renewable energy comes from wood, wood chip and wood waste. This in itself presents a problem and can hardly prove to be sustainable in the long run.

Belarus has also begun the costly and controversial construction of a nuclear power plant (NPP) on the border with Lithuania. According to some experts, Astraviec NPP will not only produce a surplus of energy in Belarus, it will also stall the development of alternative energy resources. Some argue that it will increase the country’s dependence on Russia as well, as the main contractor is a Russian company also likely to stay on to take care of the NPP’s nuclear waste disposal.

Major improvements in the recycling sphere can also make Belarus a more eco-friendly and sustainable country. The present rate of recycling peaks at 12% at the Speckommuntrans Waste Sorting Facility in Homyel, according to its Deputy Director Aliaksandr Nikonov. In contrast, about 80% of waste in Germany will be recycled and the USA can boast a reported 93% recovery rate for cardboard packaging for recycling, according to WBUR. The difference in attitudes towards recycling is staggering.

The state still has a monopoly on the recycling sector in Belarus. People continue to expect the government to pay them to return their their waste products, such as paper, plastic, and glass. However, because the rates are so low, most citizens do not take advantage of these opportunities. According to Denis Grebenchuk, Chief Engineer at Gomelhimtorg, a scrap metal facility, Roma people and the homeless, who view recycling as a business opportunity, provide the bulk of the resources.

If you have scrap metal at home or your business that you are not longer using, you can contact scrap metal yard Sydney to recycle it.

Thus, ecology remains a marginal issue in mainstream Belarus. In Germany, for instance, a major shift occurred in 1985, when the federal government announced its priorities to recycle and reduce waste. However, the government failed to act, and the amount of rubbish continued to grow, until private small enterprises stepped up.

In Belarus change is slow. Private initiatives have sprung up across the country, while the state lags behind in ecological matters. The mentality that the state should take over and solve ecological issues has slowly changed in major cities thanks to new generations of Belarusians. One can find separate containers for glass, paper, and plastic. The younger generation seems to be more willing to take responsibility for its own carbon footprint.

How to achieve a greener economy

One initiative, called “Green Map” http://greenmap.by/, aims to educate people about utilisation of toxic waste, such as used batteries, bulbs, and other products. It also provides information on how to sort garbage. Such initiatives step up where the state has failed – they encourage Belarusians to take ownership of their future by managing their own waste today.

Air quality in Belarus causes concerns, as the number of car owners has increased. According to

BelStat there are 412 cars per 1,000 residents in Minsk. This is the highest ratio in any former USSR country. In comparison, Moscow stands at 380 cars per person.

This ratio, an all-time high, also leads to very tangible problems in terms of air pollution, noise, traffic jams, and parking issues. Despite the well-developed and affordable public transportation system in Minsk, 2015 has seen a 5% decrease in the number of passengers, according to the Ministry of Transport.

Another way to go green is the paradigm of the “sharing economy” or the peer economy. This is when owners rent something out that they are not using. To some extent, this mentality has already caught on in Belarus, and it will only become more widespread. Both Airbnb.com and uber driving service have a strong presence in the country.

Since 2014 there have been regular initiatives such as free-markets, charity shops and book crossings, where people exchange, donate, or lend their old things. These events attract thousands of motivated Belarusians who care about the environment. According to scientists at the individual level any person can make a difference by giving up driving, plastic bags, or bottled water, and reducing the amount of meat they eat.