On 16 June the new building of the Belarusian Children’s Hospice (BCH) will open its doors in Baraulyany, just 20 minutes outside of Minsk. First of a kind in the country, it has been helping terminally ill children and their families since 1994. They actually pioneered both: hospice and palliative care.

A team of 25 health care professionals at the hospice helps children who are nearing the end of their lives. They maximise their comfort by reducing pain and addressing psychological, physical, and spiritual needs of such patients.

Palliative care is for children who have serious but stable conditions. It focuses on providing relief from the symptoms, and improving quality of life for both: such children, and their families. Each year more than 250 children receive much needed care in Belarus through children’s hospice.

How it all started

The Belarusian Children's Hospice first appeared in Minsk, in 1994. It was founded by a child psychologist Ms. Anna Garchakova, as a response to the ongoing consequences of Chernobyl. It initially occupied an empty kindergarten in the suburbs, and worked on the sheer enthusiasm of a handful of dedicated people. 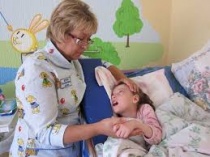 In 1998 came the first turning point. Ms. Daryl Ann Hardman, a UK citizen, began her humanitarian activities in Belarus by delivering goods and hosting Belarusian children in her home in the UK. What started as a private initiative soon grew into a full-fledged operation.

Ms. Hardman established a humanitarian organisation in Britain and tellingly named it “Friends of Belarusian Children’s Hospicel”. It started off by purchasing a wooden house on a smallholding in a village outside of Minsk and gifting it to BCH in 1999. They used it for hospice family holidays for many years, until its current main building in the Minsk suburb of Baraulyany was purchased and converted for hospice use.

Shortly after BCH began working on an adapted UK model of children's hospice at home. The main philosophy was to provide care for children with different life-limiting conditions whenever possible in their home, and not at a hospital. Currently according to BCH data, anywhere from 3,000 to 5,000 children in Belarus require palliative care.

Palliative care comes to Belarusian children in the form of a BCH medical team consisting of a doctor, nurse, social worker, carer, and BCH volunteers. With the family's help they assess the child's and the family's needs. Then they do their best to meet these needs: medical care, advice, social welfare, psychological support, counselling, social programme, and summer holidays. Families may join a bereavement programme.

For some ten years the UK Fund covered the cost of the BCH staff basic salary bill and provided advice and training in the UK. In 2010 with the training from UK specialists, the BCH set up its own dedicated fundraising and PR department. This now covers 60% of annual staff basic salaries, another 40% still come from foreign funds, namely the UK charity.

In 2011 Anna Garchakova announced the need for a new bigger, more modern building for the BCH. It would cost $4 million.

So far the BCH has just raised $1.75 million to build a modern, state of the art hospice, also in Baraulyany. The Friends of BCH raised another £250,000 in the UK. President Lukashenka donated land for hospice free of charge with a decree. The new building is due to be opened mid-June amid a fanfare of publicity.

In the earliest stages, the architect of the building came to the UK at the invitation of the Friends of BCH charity to see successful children's hospice buildings. He also met one of the best children's hospice architects in the UK. As a result he was subsequently able to incorporate many of the ideas from this visit into the new hospice venue.

I also revived BCH's Advisory Council and have chaired it for over 3 years as no Belarusian participant has yet agreed to take the chairmanship over. This is a body of mostly Belarusian top managers, company directors, one ex-Minister and some UK advisers, who meet 3 or 4 times a year to offer strategic development advice and fundraising help to BCH's director. The Council has been very focussed in recent meetings on building the new hospice building.

The new unprecedented arrangement stipulates that the state will run the medical side of the new hospice, and BCH and partners the other parts, in a building owned by an NGO. This carries some potential for clash of interests between the main stakeholders. Rigid state’s way of operation does not bide well with individualised approach to palliative care.

BCH was tolerated rather than welcomed when it first came on the scene in 1994. Many people were suspicious of it as a western idea that had no place in Belarusian healthcare, others did not understand its aims, some regarded it as a "house of death" instead of a house of light, joy and good quality of life.

Gradually both the Belarusian public, media, medical services, ministries and other governmental departments have come to gain a better understanding of the huge benefits a children's hospice. Namely what added value it brings to the country's healthcare, both in terms of vastly improved quality of care and quality of life of the chronically and terminally ill child and their family.

From the financial standpoint it also means huge savings for the state medical service when a child on 24-hour care is at home instead of in a hospital intensive care department. For the past decade BCH has trained medics from all over Belarus in children's palliative care and hopefully will be able to expand these programmes in its new education centre.