During December and January, the Ostrogorski Centre analysed the ongoing dispute between Belarus and Lithuania over the Astraviec nuclear power plant (NPP), Belarusian army reforms, and the national immigration policy.

Our analysts also commented in the media on growing support for Donald Trump among Belarusians, a 30% staff cut in the central apparatus of the Ministry of Foreign Affairs, personnel renewal trends in the government establishment, and the implications for Belarus of a new escalation in the Arab-Israeli conflict.

The Centre also held a conference on legal education in cooperation with the Belarusian State University’s law faculty, supported by the Embassy of the United Kingdom in Minsk.

Ryhor Astapenia analyses whether the West will join Lithuania’s crusade against Belarus’s nuclear power plant project. On the one hand, many Western politicians see Lithuania’s campaign against the Belarusian NPP as politicised and even panicked. On the other hand, perhaps thanks to Lithuania’s position, any cooperation (except on security issues) between Belarus and the West in the atomic sphere has become less feasible. Therefore, while Lithuania loses the conflict diplomatically, Belarus does not win either.

Siarhei Bohdan describes how Minsk silently builds a new army. The Belarusian government has adapted its policies in response to the Kremlin’s staunch refusal to provide Belarus with heavy weapons. Official Minsk continues to build an army better suited to its limited needs and financial constraints, while quietly discarding its Soviet-era, heavier arms without replacement. The simplification of existing army structures automatically follows, which will also reduce offensive capacities.

Alesia Rudik discusses Belarus’s immigration policy and how it perpetuates the country’s demographic crisis. In the context of low birth and high death rates, the Belarusian population can only grow through increased immigration. However, Belarus still has no clear policy to encourage labour migration. Moreover, bureaucratic procedures, such as work permits, remain difficult to obtain for the majority of foreigners apart from citizens of CIS member countries, especially Russians, who have special conditions for working in Belarus.

On 28 December 2017, the Ostrogorski Centre, in cooperation with the Faculty of Law of the Belarusian State University and supported by the Embassy of the United Kingdom in Minsk, conducted a conference under the title “The reform of legal education in Belarus and the UK: the exchange of experience and vision for the future.”

The 16 speakers included representatives of the British Embassy, the Ministry of Education of Belarus, the Belarusian State University, Hrodno State University and Brest State University. They comprised legal academics and administrators as well as practitioners from Belarus. In addition, three speakers came from UK-based institutions, namely the British Institute of International and Comparative Law, the London School of Economics and Political Science, and the University of Liverpool.

Conference guests included representatives of various government bodies, academics from public and private universities, as well as representatives from Belarusian NGOs (around 40 people in total). The conference proved an opportunity not only to share the experiences of Belarusian and UK-based academics, but also to help shape the debate on legal education reform in Belarus.

The Ostrogorski Centre broadcast the conference live on YouTube and Facebook, and has made videos of each panel available on its YouTube channel (links below). The conference languages were Belarusian and Russian.

The Atlantic magazine quotes Yaraslau Kryvoi in its recent article about decreasing global support for Donald Trump. Belarus, however, shows the opposite trend: growing Belarusian approval for Trump likely has more to do with the American president’s leadership style than any U.S. policies. According to Yaraslau, the Belarusian leadership sees Trump as a macho leader similar to the one Belarus has itself. Like Trump, Alexander Lukashenka promotes himself as someone fighting on behalf of the people against the elite. 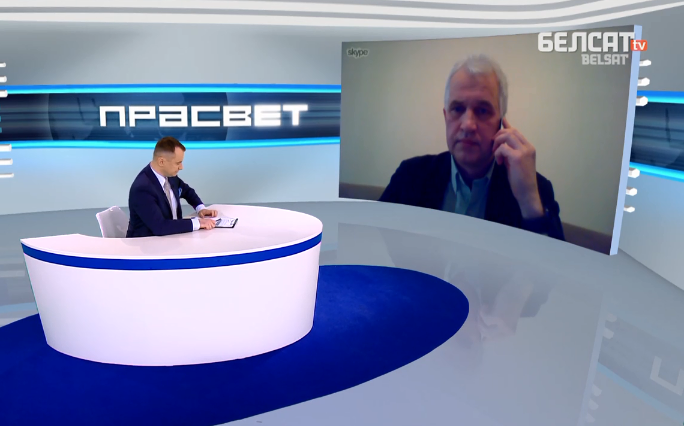 Commenting to Belsat TV, Igar Gubarevich opines that the 30% staffing cut in the central apparatus of the Ministry of Foreign Affairs has become a big stress for Belarusian diplomats. The Ministry’s comprehensive tasks require not only good quality experts, but also a sufficient quantity, otherwise the cuts will damage the interest of Belarus as a country.

Siarhei Bohdan, interviewed on Polish Radio, argues that the government establishment renews itself more efficiently than the opposition. It now includes completely different people than it did two decades ago. They value independent Belarus more than the Soviet Union, and MP Ihar Marzaliuk presents a good example. ‘I am convinced that Ihar Marzaliuk is not a lone wolf, but rather the tip of the iceberg, an example of generational change in the Belarusian power elite,’ says Siarhei.

On Radio Liberty, Siarhei Bohdan discusses the consequences of a new escalation in the Arab-Israeli conflict, the role of Iran, and the implications for Belarus. In the Iranian-Saudi confrontation, Belarus has sided with the conservative Arab coalition that it thinks has a higher chance of winning, and which is clearly the wealthier side.

The Ostrogorski Centre continues to update its database of policy papers on BelarusPolicy.com. The following papers from partner institutions have been added this month: