Belarusians are really beginning to worry about their domestic state of economic affairs more than Ukraine as of late.

This is the main result of a December 2014 poll from the Independent Institute of Socio-Economic and Political Studies (IISEPS) published in early January.

The number of people favouring a pro-European orientation for the country and supporting Ukraine in its conflict with Russia has increased after almost a year of falling. The same was the case with the approval rating of Alexander Lukashenka: it fell after nine months of growing.

The tough economic situation in Belarus that followed the economic crisis in Russia partially explains these developments. A relative calm in fighting in Ukraine also contributed to this shift in public opinion.

However, the public's dissatisfaction, leading up to the 2015-presidential campaign, will hardly shake the foundations of the political regime. And yet, Alexander Lukashenka's nerves in the wake of the elections and his potential clumsy measures to manually fix the economy may destabilise the situation even further.

The first set of the December IISEPS poll results, indicating this important shift in Belarusian public opinion, included views on foreign policy and the Ukrainian crisis.

Following the annexation of Crimea, the beginning of the war in Eastern Ukraine and a new wave of pro-Kremlin propaganda, between 55% to 70% of Belarusians (depending on the question) have supported the official Russian stance on the Ukrainian crisis.

Moreover, in March, July and September 2014 IISEPS polls showed a serious decline in pro-European sentiments among Belarusians. Society was disappointed by the West's policy towards Ukraine as they saw it from how  Russian media portrayed it. Two thirds claimed their attitude to the European Union worsened during 2014.

December was the first month in a year when the popularity of the "pro-Russian replies" such as the justness of Crimea's annexation, support for Russian-backed separatists, a desire to unite with Russia, and a refusal to join the EU if it were proposed all went down by 3-6% on average.

Accordingly, support for Ukrainian territorial integrity, viewing the Crimean events as an illegal annexation, a preference for European integration over a union with Russia – went up by the same 3-6% margin. Belarusians holding these views still constitute a minority, but now it is a growing one.

Several factors explain this new trend. First of all, Belarusians have recovered from the psycho-informational shock after a war burst out in their neighbourhood. People have become more rational in analysing the events in Ukraine. The truce in Eastern Ukraine and, hence, the less aggressive TV coverage of the conflict also contributed to this "cooling off" in society.

The economic crisis in Russia, especially when it started to spread to the Belarusian economy, has also made some Belarusians reconsider their geopolitical views. It is one thing to support Russia's swift and "cordial" takeover of Crimea, and another thing altogether to pay the price for aggression committed by your neighbour.

After Vladimir's Putin soaring approval rate started to go down in Russia from 87% some joked that, at long last, the refrigerator has started to win the battle against the TV-set in Russian minds. In other words, Russians have begun to value their well-being and shrinking incomes more than abstract geopolitical achievements promoted by TV propaganda. The December IISEPS poll revealed the same trend in Belarus in relation to Lukashenka's rating. 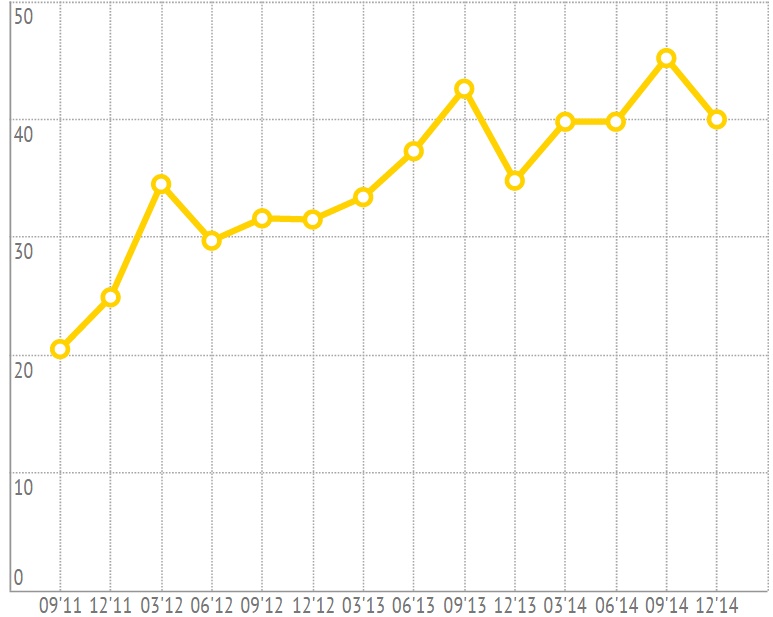 On the graph above are Lukashenka's first climbs in popularity from around 20% as the country recovered from the devastating financial crisis of 2011. It rises to 42.7% in September of 2013. Then the GDP and salaries stop growing and his support level starts to decline once more, but then suddenly – a sharp climb upwards back to 45% unfolds, despite the fact that incomes have not increased.

Sociologists from IISEPS explained this anomaly as a result of the Ukrainian factor. Namely, Belarusians compared their own lives with those of Ukrainians and started to value stability and peace more than economic prosperity and, naturally, supported the head of state who has managed to protect them from these and other unpleasantries.

However, seeing as Ukraine has fallen out of many people daily concerns, their concern for their own economic well-being has taken over. In other words, Lukashenka has exhausted his ability to gain popularity from the Ukrainian conflict.

Generally, the ups and downs of popular support of a leader have been commonplace in Belarus. But today, roughly ten months before the next presidential election is set to take place, a decline in popularity is only beginning. Considering the state of Belarus' and its main donor's (Russia) economy, some experts, including Radio Free Europe analyst Valer Karbalevich, believe political stability in the country is clearly under threat

A country arrives at election year in a state of socio-economic turbulence. Intrigue returns to the presidential election. Welcome instability!

However, the foreseeable public disappointment in the economy has few chances of leading to a serious political or protest movement.

First of all, to challenge the authoritarian regime one needs a viable political alternative to it. The Belarusian opposition that is showing for the 2015 elections probably in the worst shape it has ever been. According to IISEPS data, the public's trust towards all oppositional parties combined remains stable, but low – 16%. The most popular opposition leaders enjoy only 2-3.5% electoral support.

The political unification talks among seven of the most viable opposition organisations failed in November 2014. Figures who are considering making a run at the presidency in 2015 (Anatol Liabedzka, Uladzimir Niakliaeu and others) have found themselves in a very difficult conceptual gridlock. Having no resources to obtain free and fair elections they have to count on street protests as a last resort. But Belarusian society has taken a strong anti-revolution vaccine as a result of the Ukrainian revolution and how it was reflected in both Russian and Belarusian state-controlled media.

The economic crisis that Belarus has been undergoing since December 2014 has become an additional obstacle for Lukashenka's opponents, though it might sound illogical at first glance.

With limited possibilities of getting substantial Russian economic support, the Belarusian authorities are expected to bet not on political carrots (raising salaries in an election year) as is their custom, but on sticks – more repression and preventive actions to deter possible protests.

The atmosphere of the 2015 presidential elections will most likely differ from that of 2010, when nine alternative candidates could freely campaign, meet with the voters and debate in a live show on state TV.

In December, Belarus' parliament swiftly adopted amendments to the laws on media that complicate the work of online media. A recent wave of blocking independent web sites was another sign of this tightening-the-screws trend.

Still, it appears to be too early to bury all intrigue. Psychologically, coming to the elections without traditional big bag of bailout cash, is an issue of much concern for Alexander Lukashenka. Faced these new conditions, he may resort to some radical economic measures to bring everything back under control. This may well have its own unpredictable political ramifications.