On 31 January, Belarus’s state military-industrial committee reported that the export of Belarusian arms in 2017 exceeded the previous year by 15%, reaching more than $1bn sales. Growth occurred despite problems in accessing Russian military orders, an unclear situation about cooperation with Ukraine and the reported disruption of a deal with Azerbaijan. Meanwhile, Belarusian officials announced plans to produce new missiles and combat drones.

Last year’s performance of the national defence industry proves that Belarus evolves economically. It also demonstrates the contradictory balance between Minsk’s efforts to maintain neutrality and its efforts to manoeuvre between Moscow and Kyiv, Baku and Yerevan, and other centres.

No stagnation in the defence industry

On 31 January, a session of the managing officials of Belarus’s state military-industrial committee summarised the results of the committee’s work in 2017. According to official information, production grew by a quarter. Total exports of Belarusian arms exceeded the previous year’s level by 15% and made up more than $1bn in sales. While the government steadily struggles with problems in the civilian segments of its machine-building branch, the defence industries perform much better. They continue to earn impressive sums year after year, such that Belarus retains its position among top-20 world arms sellers.

Belarusian arms manufacturers have also diversified their client base. In 2017 they sold products to 69 countries, compared to just 60 countries in 2016. For instance, Minsk-based KB Radar could export its electronic warfare systems Groza-S and Optima-B, while the Barysau-based 140th Tank Repair Plant delivered its light-armoured vehicles, Kaiman and V-1, not only to the Belarusian army but also to an undisclosed African nation.

He also revealed something remarkable about the Belarusian arms industry’s international ties. Despite historical ties and the critical importance of Russian markets and partners for Belarus, only 54% of the ‘international interaction’ volume for Belarusian defence industries involves Russian firms. He did not specify what he meant under ‘interaction.’

Minsk allegedly stopped selling Kyiv military equipment immediately after it started military operations in eastern Ukraine. This statement likely shows the wish to downplay respective contacts with Ukraine which undoubtedly continue, although Minsk most probably reclassified them in order not to irritate Russian chauvinists. 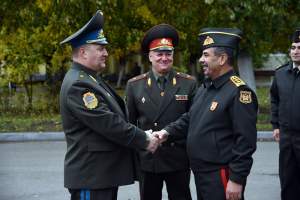 In addition to difficulties with Russia and Ukraine, Belarus recently needed to resolve controversies in its collaboration with Azerbaijan. On 1 February, Belarusian journalist Alyaksandr Alesin told the daily Komsomolskaya pravda v Belorussii that Minsk had renounced the deal it negotiated with Baku for the sale of Palanez multiple launch rocket systems (MLRS). He insisted that the Belarusian government renounced these plans because of Armenia’s intervention. Armenia, clashing with Azerbaijan over Karabagh, formally partners Minsk in the Collective Security Treaty Organisation. Alesin announced that Minsk would soon sell arms to Armenia instead.

The Russian propaganda outlet Eurasia Daily followed the story on 6 February. It quoted Russian and Armenian military experts as saying that there was probably never such a deal in the first place.

These allegations clash with some well-known realities. First, Yerevan has hardly any leverage over Minsk. For more than a decade, Baku and Minsk have cooperated in effectively every sphere and the Belarusian government has no interest in disrupting such relations because of Armenia. Yerevan, by far the poorer of the Caucasus states, cannot replace Baku, especially in the defence sphere.

Much circumstantial evidence indicates that Minsk and Baku at least considered the Palanez deal. First, top defence and defence industry officials from both countries held numerous talks in recent years. Official announcements acknowledged that last year’s negotiations between the Belarusian and Azerbaijani presidents covered defence cooperation. Almost certainly these negotiations included Palanez – it cannot be otherwise, given the importance Lukashenka attaches to his Palanez project. Azerbaijan also has an interest in such weapons to neutralise the Iskander ballistic missiles Armenia received last year. Last but not least, a prominent Azerbaijani expert, general Yaşar Aydəmirov, spoke to several Azerbaijani media about the probability of such a deal between Belarus and Azerbaijan. 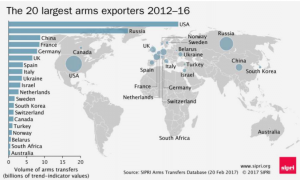 Minsk tries to develop new products to counter problems in traditional markets. Talking to the BelTA news agency on 31 January, the state secretary of security council, Stanislau Zas’, revealed plans to produce new sophisticated arms. In particular, this year, defence industries are planning to complete the development of combat drones.

Above all, however, Minsk develops its defence industrial capacities in the area of rockets and missiles. Minsk started its missile programme from zero, perhaps only in the early 2010s. In the quoted interview, Zas’ said that in the first half of 2018 Belarus would test a new, completely Belarusian-made rocket for the Palanez MLRS. Until now, Belarusians relied on rockets including some Chinese parts for this system.

In addition to replacing the remaining foreign components in the Palanez rockets, Zas’ announced that designers were developing a new, Belarusian missile for the Soviet-designed Buk surface-to-air missile (SAM) system. Minsk believes that with the introduction of a new missile it can make the SAM system fit-for-purpose again.

According to circumstantial evidence published in Belarusian media, it could be retro-fitted Soviet-designed air-to-air missile types R-60 and R-73 that Belarusian designers intend to use in a new version of the Buk SAM system. First, Belarusian company Belspetsvneshtechnika has modernised these missiles to extend their lifetime and efficiency. Moreoever, it has designed new modifications, R-60BM and R-73BM, to be launched also from land-based SAM systems.

To summarise, the Belarusian defence industry faces multiple challenges which, if not addressed, could weaken the industry in the long term. First, instability in cooperation with Russia and Ukraine, especially with both at the same time, looks potentially damaging. Secondly, the national arms manufacturers need to design new defence products, sometimes never before produced in Belarus, as older Soviet types become outdated.

However, if the national defence industry copes with both tasks by diversifying its partnerships and developing new products, that not only will ensure its survival but also strengthen the country’s independence.