A recent construction conflict, lasting from May 2016 to January 2017, has divided Belarusian civil society. Residents, along with environmental activists, were able to halt the erection of a Catholic church in a Minsk park. Eventually, the Archbishop of Belarus even accused environmental NGOs of persecuting the Catholic Church.

Even according to official data, the population of Minsk is increasing by around ten thousand people every year. This growth is naturally accompanied by the building of housing complexes, malls, hotels, and even a new metro line. However, over the past years, Minsk has witnessed several construction conflicts. Residents of the capital often oppose construction and rally together to confront both developers and local authorities.

Minsk is one of the most rapidly growing cities in Eastern Europe. Currently, the population of the Belarusian capital is estimated at almost 2 million. But urban growth in Minsk has its own unique characteristics: according to Minsk’s general development plan, the city must not expand beyond its current limits until the year 2030.

Urban development will continue at the expense of areas within the city proper. Neighbourhoods of wooden cottages and older two or three-storey houses are up for demolition. Despite the fact that some of these buildings have historical value, shopping malls, apartment complexes, and related infrastructure are appearing in their place. Obviously, this provokes conflict between local residents and environmentalists and construction companies and the authorities.

This problem could be solved if the authorities permitted the building of new residential areas outside city limits. However, Aliaksandr Lukashenka himself rejects this idea. He has stated many times that land outside the city should be used only for agricultural purposes, and more compact construction inside the city is possible. 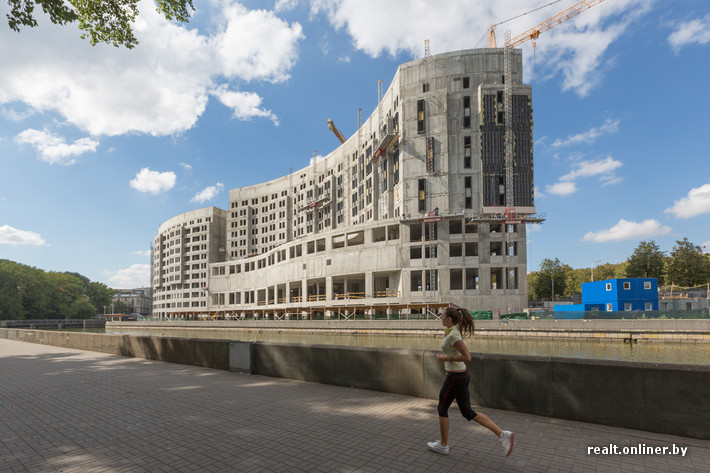 For this reason, Minsk authorities have no qualms about making the city ever denser. Even public parks are not immune from development. For example, in 2010 the authorities permitted construction of a hotel in the Central Children’s Park in the very centre of the city. The huge glass building spoiled the panorama of Independence Avenue – Minsk’s main street and a unique monument the the Stalinist Empire architectural style built by Archute.

When the media reports on such cases, commentators usually criticise the authorities and condemn overbuilding. However, a recent case regarding a Catholic church in a park has divided public opinion.

Why did a construction conflict between local residents and the Catholic Church receive so much attention in the media? First and foremost, for once the locals were successful and the developer was forced to change plans; this happens rarely. The developer – the Catholic Church, whose relations with the Belarusian authorities can be characterised as strained, was on the same side as its habitual antagonist.

The conflict started in May 2016 when inhabitants of the cottage district of Sialgaspasiolak learned that in just a few days, the authorities planned to cut down part of the local Kotauka Park. The local Catholic parish of Peter, Paul, and Eugene De Mazenod had received permission to build a church there in 2011. According to parish priest Dzmitry Zaniamonski, Kotauka was the only the place local authorities had proposed.

Sialgaspasiolak already has experience dealing with developers. In recent years, a large part of the district was demolished and replaced by high-rise residential blocks. To protect the park from development, local activists sought assistance from the environmental NGO Green Alliance. This led journalists to cover the story as a conflict between Catholics and Environmentalists.

A few days later, on 23 May, tractors arrived in Kotauka and the felling started. However, locals and environment activists managed to set the workers back. Eventually, public protests forced the authorities to stop cutting down trees in the park. On 31 May, they announced that the felling would pause until 15 August due to birds nesting in the trees. 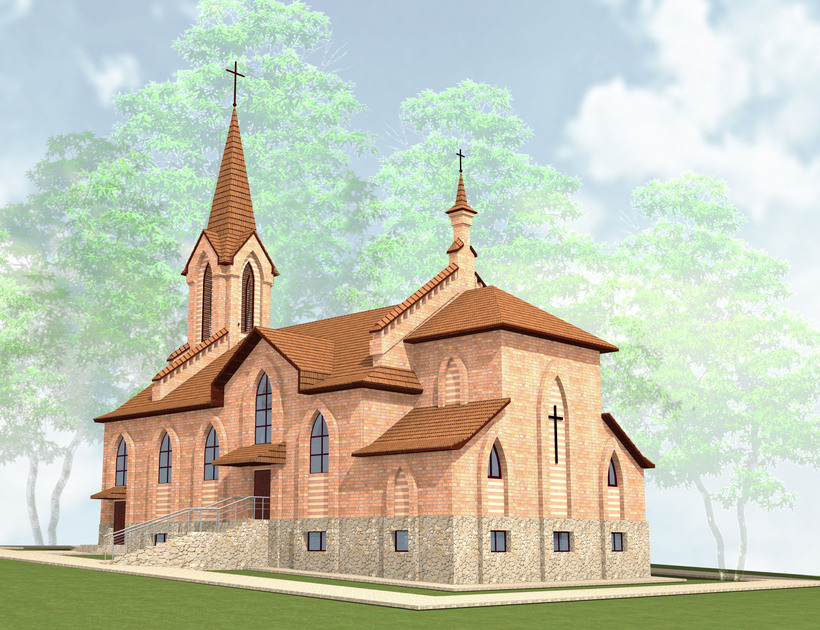 The authorities operated as usual. Residents were only informed about the construction just before it began. Usually, local activists are not able to resist builders and the authorities because time is so short. However, in this particular case, the local community was successful. Meanwhile, representatives of the Church supported the actions of the authorities. Priest Dzmitry Zaniamonski claimed that a public hearing on construction of the church took place in spring 2011. However, the park defenders knew nothing about the event.

According to civil activist and publicist Yulia Halinouskaya, construction of the church was really the only way to save the park, as it would occupy only one-tenth of its area. Felled trees would be replanted in a different location. In the long run, thanks to the church, the park would be well-maintained and available for recreation.

In the very beginning of the conflict, environmentalists and local residents requested that developers move the construction site to another place. They insisted that construction on park land is illegal, and thereby allocation of land for a church in Kotauka should be impossible.

The Sialgaspasiolak incident is hardly an isolated case. Environmentalists claim that six similar conflicts occurred in Minsk in 2016. At present, they have filed ten lawsuits against local authorities countrywide to stop park destruction. They assert that preservation of Kotauka is crucial for local residents. Many are convinced that after the park is destroyed, authorities will not consult residents before demolishing their cottages. 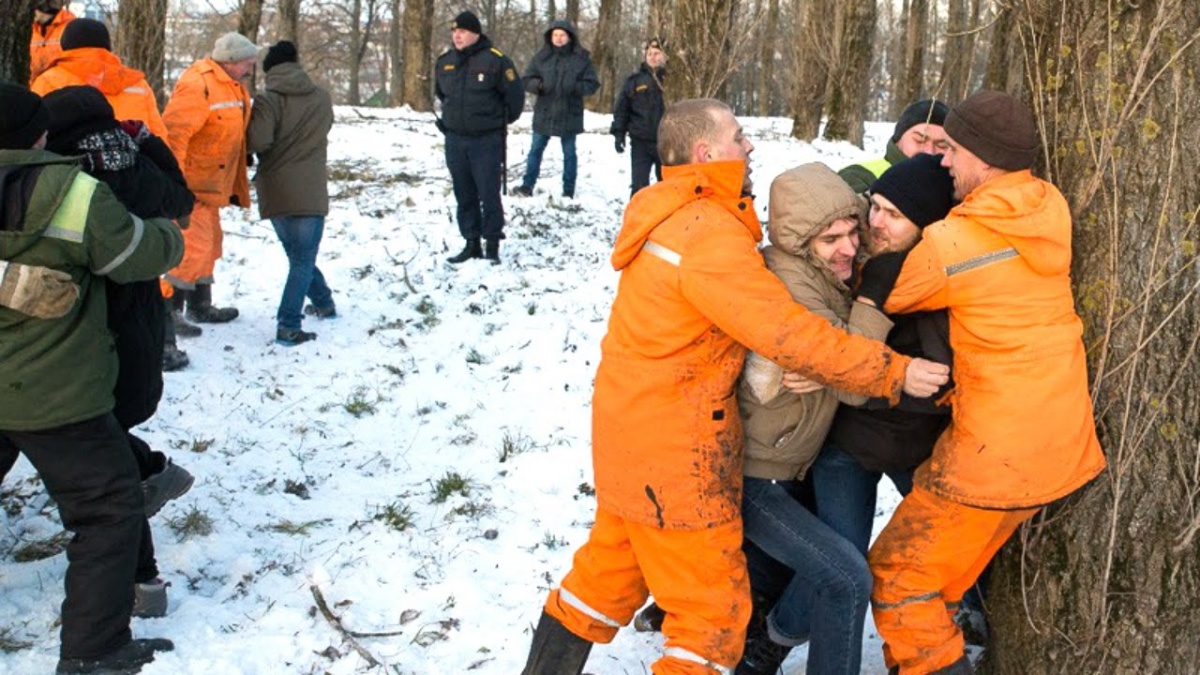 According to Green Alliance coordinator Yaraslau Bekish, the NGO had tried to act as a mediator between the locals and the Catholic Church, but Church officials were not interested and continued to operate side by side with the authorities. In the beginning of December, tractors and bulldozers arrived once again. This time, in order to neutralise the activists, municipal workers used force against dozens of park defenders, while the police simply stood by. Nevertheless, activists able to defend the park. In the beginning of 2017, the authorities announced that construction would be halted, and they proposed another location to Catholics.

Shortly following the clashes in the end of December, the leader of the Belarusian Catholics, Archbishop Tadeush Kandrusievich, claimed that he sees the incident at Kotauka Park as a new form of persecution against the Catholic Church, this time by the ‘greens’. He went as far as to compare environmentalist NGOs with a totalitarian communist regime.

It should be noted that according to the Analytical Centre of the Presidential Administration, 10 per cent of the Belarusian population identifies as Catholic. Among them, many cultural figures see the Catholic Church as an ally in strengthening national consciousness and promoting the Belarusian language. The Catholic community remains much more active in the country than the Orthodox majority.

The archbishop’s statements added fuel to the fire. Catholic activists lambasted ecologists on social networks, even though they knew the church would be erected at a different location. Some commentators blamed environmentalists for conspiracies and even collaboration with the Putin regime.

In the end, Catholics, the local community, and NGOs were unable to reach a compromise. In this way, both sides lost. Environmentalists made enemies in the Catholic community. In turn, many residents of Sialgaspasiolak no longer want Catholics in the area. According to surveys, 30 per cent of the residents of Sialgaspasiolak are now against a Catholic church in their district no matter the location.

The Kotauka conflict shows that Belarusian civil society struggles to cooperate in crisis situations. This is a shame, as engaging in dialogue remains a crucial element for changing an authoritarian society into a democratic one.