Belarusian Official Fined for Using Russian instead of Belarusian

On 3 September, Belarus saw an unusual legal precedent set. The court tried Alieh Halaŭko, the director of a branch of a Minsk district housing services, for answering an address written in Belarusian with Russian. According to the Law on Addresses of Citizens and Legal Persons adopted in 2011, responses to written addresses must be in the same language of the address.

Meanwhile, citizens and interest groups within the government recently prevented some Russification measures introduced by indifferent officials. In the Minsk metro, announcements reverted back to Belarusian after a large mass of citizens voiced their concern and the geographical names continue to be written in a Belarusian Latinised script instead of a transliteration from Russian.

While strategically the government does not care about the revival of Belarusian culture and Lukashenka’s regime did much to diminish its status during its earlier period, today at the lower levels of administration citizens can advocate for Belarusification quite successfully by simply exercising their legal rights. Moreover, inside the bureaucracy various attitudes to the language question exists and collisions among officials on that matter have become possible in Belarus.

In September 2013, Belarusian blogger and journalist Hlieb Labadzenka decided to sue the director of housing services of his district, Alieh Halaŭko. The conflict started from Labadzenka’s neighbour complaint which he sent to the district authorities. He accused Labadzenka of illegally rearranging his flat which apparently disturbed the neighbour, although it turned out that this was not the case. The housing service issued a warning to Labadzenka without even visiting the flat. Labadzenka wrote a note of protest to the authorities, demanding that the response should be written in Belarusian. 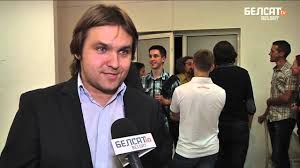 However, in his reply, the service director not only used Russian, but also noted that according to the Constitution of Belarus, citizens can use any of the two official languages. Here, he demonstrated a lack of knowledge of Belarusian law, because according to the 2011 Law on Addresses of Citizen and Legal Persons, the officials must write replies to addresses strictly in the language in which the address was originally written.

Labadzenka decided to exercise his legal rights and support the Belarusian language, so he sued Halaŭko over this violation. The trial took place on 3 September, to which the accused did not show up. Nevertheless the court found him guilty and imposed a charge of BYR 500,000 ($55).

According to Labadzenka, all of the officials he dealt with during the case behaved very politely. Even the judge herself expressed her support to Labadzenka. However, they also had to admit that they cannot do their paperwork in Belarusian – there are neither the proper documentary forms nor specialists that can record the trial in Belarusian.

Afterwards, in response to journalist’s question, the director of housing service admitted that it was his fault indeed and in the future he will stick to the law.

“I am not hungry for Mr Halaŭko’s blood, I would rather he received a warning, but the court simply cannot give a smaller fine according to this article [of the law -ed. BD]. For me the most important thing is creating a precedent: not just shout out that the authorities are endangering the Belarusian language, but to support it with legal means”, Hlieb Labadzenka said.

In August 2013, Minsk dwellers heard some new announcements about the Minsk underground transportation system, which explained the rules of conduct in the tube. The new announcements were in Russian, although the stations themselves are always announced in Belarusian. One of the metro officials explained that in addition to Belarusians other people (meaning Russian-speaking foreigners) are using the metro and might not understand.

Immediately a civil campaign started which demanded that the announcements should be made in Belarusian. The campaign very closely resembled the Minsk transport tickets case, when the transportation service decided to change the language of their tickets to Russian. Concerned citizens demonstrated a fast reaction to the change and eventually won the battle: the following month, new tickets came out in Belarusian.

This time the situation followed a similar pattern. The director of the Minsk metropolitan shortly after the campaign publicly said that soon all announcements will be made in Belarusian. “We missed this point, it is our fault. Tomorrow we will change it”, he explained to journalists, speaking in Belarusian. 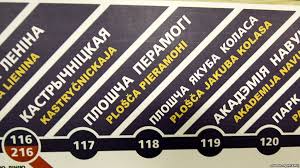 Meanwhile, metro managers continue to rewrite the topographical city names in a Belarusian Latinised alphabet, which caused much discussion when introduced in the metro in November 2012.

Some people in the city administration, and in particular chief executive deputy Ihar Karpenka, demanded that the geographical names should be transliterated from Russian using the English alphabet. The opposite side presented by Toponymical Commission at the Council of Ministers supported the use of the Belarusian Latinised script, which has a centuries worth of tradition in Belarus.

As the metro director said in October, they continue to rewrite the geographical names in the established Belarusian Latin script.  In other words, experts from the Toponymical Commission defeated the bureaucrats from the city administration in this small battle for identity.

The head of Belarusian Language Society Alieh Trusaŭ optimistically says that “the situation is getting better little by little. We just need to watch thoroughly the language policies and actively express our concerns. It is thanks to active citizens that numerous recent cases were successful”.

These cases shed more light on the language situation in Belarus and positions of various interest groups within the government, as well as citizens and civil society. First, it is clear that the government has no strategic goal of reviving the Belarusian language. As the censuses of the last two decades show, after a short revival in 1990s Belarusian language sharply decreased in use.

However, as the political environment is changing, Lukashenka is less concerned with the “opposition”  language. The government lets lower level bureaucrats deal with it. These bureaucrats, for their part, deal with it rather voluntarily and in a reactionary manner. It is precisely here that citizens can influence the situation by advocating for the Belarusification of the public administration.

Second, the bureaucracy has no unified approach to the Belarusian language, and attitudes to it varies from person to person and from institution to institution. Therefore, such collisions, as in the case of Latin script in the metro, become possible, and their outcome is never clear.

Third, citizens can indeed influence the situation without making holding massive protests in the streets. They can simply exercise their legal rights and officials have to consider them and implement their demands. Belarusians just need less indifference and more assertiveness as the situation is actually as not as bad as it might seem.