The “Real Belarus”: Travel Tips from a German Expat

At the beginning of the new year, Belarus made headlines in the Western press once again. The reporting on the new internet law showed that Belarus is a white stain on the European map for most people. This week the Toronto Star published an article called "Belarus: The North Korea of Europe". It’s those often misleading descriptions that most Westerners have in mind when going to Belarus for the first time.

Based on Western media reports, it is impossible to imagine what Belarus is actually like and how people live here. For this reason, Belarus Digest launches a new series of articles, written by a German living in Belarus. In several articles, we will try to paint a more realistic picture of life in “Europe’s last dictatorship” and describe events and everyday life from the perspective of a Western expat. So let's begin the journey.

If you plan to visit Belarus, you are probably a diplomat or business man on a mission, a backpacker or a German between 60 and 70 on an organized commemoration tour.  Unless you drive, there are two principal ways to arrive in Belarus – by plane or by train.

Landing at Minsk-2 Airport: Welcome to the Potemkin Village!

Airport Minsk 2 will seem strangely deserted. There was National Airport Minsk 1 in the very middle of the capital, which was reserved for flights of the president and inner-Belarusian flights but it is no longer used. So Minsk 2 is the only major international airport in Belarus.

Upon landing you will probably be intimidated by customs officers and border guards in huge hats who never smile or try to pretend to speak anything other than Russian. You will need to buy a Belarusian insurance because the traveling insurance you bought in your home country will not be valid in Belarus no matter what the agent told you at home. When you have passed the passport and customs control,  you will take a relieved breath and head towards Minsk.

Make sure to buy some Belarusian Roubles which you can't get in Western capitals. Bring small bank notes and a big purse – changing 10 Euros will bring you more than 100 000 roubles. There are no Belarusian coins, only paper money.

Take a taxi or marshrutka (a mini-bus) to the city. You will have a 42 km drive to think about where you have landed now.  The highway connecting the international airport Minsk 2 to the city looks very modern and shows off the national companies and campaigns on glossy (English language!) road signs. Clearly this country wants to impress its foreign visitors from first sight.

However, you will understand quickly that this road as well as the impressive buildings you will see when entering Minsk are Potemkin villages. The facades are beautifully maintained and always freshly painted, but when you see them from the backside you understand that you have been fooled. Nevermind, Minsk is still a nice city.

Getting There by Train: Gradual Adaptation During an Overnight Trip

When you arrive by rail, you will probably take an overnight train from Berlin or Warsaw. Most likely you will feel like you are in one of the documentaries you saw on TV, describing trips on the Trans-Siberian railway titled “From Berlin to Vladivostok”. You will have to deal with a stewardess who speaks only Russian. That seems to be very intimidating, particularly when she shouts at you at your home railway station that she is no longer going to wait until you have put your belongings into the train as the train is already running late because of you.

You will then enter a compartment that you share with two or three fellow travelers. Most probably they will be Belarusians coming back from a visit to their children and grandchildren who immigrated to the West. Over the long trip (around 18 hours from Berlin) you will get to know them very well and agree to pretend some of the booze they bought is yours as they exceed the allowed amount. You will pass the border control in the very East of Poland and then in Brest. As always, border guards will not speak a word of English. 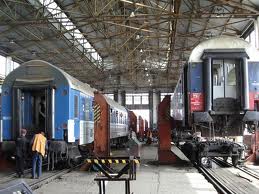 Then you will see how the wheels of a whole train are changed. Train tracks in Belarus (and elsewhere in the former Soviet Union) are wider than in the rest of Europe.  One carriage will be lifted after another while you are actually on the train. It is an amazing experience.

When you enter Minsk after four more hours of rattling through forests and neat villages with railway buildings that are painted pink and blue and yellow you will hopefully be impressed.

The Minsk railway station is newly built and looks like a UFO landed on the railway square with its two towers. You will get out of the train and be caught up in the buzzing atmosphere: taxi drivers offering you a ride, people meeting their relatives that unload their luggage… Until some years ago, they were still playing a march for international trains arrived in Minsk. This honor is reserved for trains arriving from Moscow only.

Unless you know Minsk and its system of public transport well, treat yourself with a taxi ride to your final destination. It is not expensive, and when again in life will you have the possibility to be driven around a Soviet Union theme park sitting in a Lada with fake fur on the back seat?

Three Survival Tips for Your First Visit to Belarus

So, when traveling to Belarus for the first time, make sure you remember these three tips:

First, never be intimidated by an official unless you have done something illegal and there is a chance they know about it.

Second, never try to put on a seatbelt when sitting in the back back of a taxi. Even if you may find seatbelts, the taxi drivers will be seriously insulted and take it as a sign that you do not trust their driving skills.

Third, if you are not keen on reading newspapers and books in Belarusian or Russian for the duration of your stay, bring your reading materials in a language you understand. It is impossible to buy international newspapers in Belarus.