Eastern Europe is central to Jewish history, but the region today lacks Jewish heritage sites. Very few landmarks commemorate the millions of Jews exterminated there during WWII, or their role in local culture and society before the Holocaust.

A new project, “Shtetl Routes: Vestiges of Jewish Cultural Heritage in Transborder Tourism”, aims to address this problem: by November 2015, tourist trails honouring the Jewish heritage of Belarus, Poland, and Ukraine will link the border regions of the three countries together.

The trail is likely to pass through the Belarusian towns of Navahradak, Slonim, and Pinsk. The first materials on the Jewish sites in Belarus will already appear online in the next few months.

Launched by the Brama Grodzka Theatre NN Centre in Poland, the project benefitted from a €400,000 grant from the European Union’s Cross-border Cooperation Programme Poland-Belarus-Ukraine 2007-2013.

The project is controversial in a region where anti-Semitism remains widespread. According to the 2009 population census, only about 0.1% of Belarusian citizens are Jewish. But according to a 2008 European Values Survey (EVS), one in every five Belarusian respondents admitted to not wanting Jews as neighbours.

The project envisions the creation of three tourist trails along Jewish heritage sites in the border regions: one in Poland, one in Ukraine and one in Belarus, as well as a shared international trail. The project also aims to promote on-site and archival research and create a guidebook and Internet portal on Jewish history in the region.

The project even envisions 3-D virtual models of five Jewish towns, or “shtetls,” to be built in each of the participating countries. On the Belarusian side Yanka Kupala State University in Hrodna and the Museum of History and Regional Studies in Navahrudak are responsible for the project.

Forgotten history of the Belarusian Jewry

Judging by the scant mention of Jews in Belarusian school textbooks and state media, Belarusians might conclude that their country does not have much Jewish history. In reality, Jews were highly concentrated in the area as early as the fourteenth century.

Poland and the then Polish-Lithuanian Commonwealth which included Belarusian lands became the centre of European Jewry due to a combination of push and pull factors. The Jews fled persecution in Western Europe, especially in the German states. At the same time, they took advantage of the many economic opportunities granted by the Polish monarchs. Although Jews could not own land or hold public office, they thrived as a middleman minority.

Soon after the partitions of the Commonwealth by the Russian, Prussian, and Austrian empires, the area experienced an influx of Russian Jews due to the institution of the Pale of Settlement. Instituted by Catherine the Great in 1791, the Pale restricted the residence of Jews to the western provinces of the Russian empire. In the 19th century, the Pale was home to over five million Jews, representing 40% of the world’s Jewish population at the time.

At the beginning of the 20th century, Jews amounted to over 30% of the Belarusian population. Some towns, such as Minsk, Pinsk, Mahiliou, Babrujsk, Homiel, were nearly 50% Jewish. Some of the most famous Belarusian Jews include artist Marc Chagall, composer Irving Berlin, and Israeli Prime Minister Yitzhak Shamir. In the 1920s, the Yiddish language even had the same status as Belarusian, Russian, and Polish in Soviet Belarus.

A few decades later, over 90% of the Belarusian Jewish population was exterminated in the Holocaust. Since 1989, most of the remaining Jews (over 57,000) have emigrated to Israel, bringing the Jewish population of Belarus down to 13,000, according to the 2009 census.

No Jews as neighbors?

Strikingly, anti-semitism in Belarus remains even in the absence of Jews. Most Belarusians are likely to have never met Jewish people in person. Even so, some 20% of Belarusians would prefer not to have Jews as neighbours, according to the 2008 EVS, a cross-national survey research program on basic human values, covering over 47 European countries/regions. In Belarus, 2008 EVS wave was sponsored by the European Values Study (EVS) Foundation, Department of Sociology at Tilburg University and by Renovabis at the Belarus State University.

The share of the Belarusian population negatively predisposed against Jews is far greater than in neighbouring Latvia (9%), Ukraine (11%), Russia (14%), or Poland (18%). Only Lithuanians, with 28% of respondents mentioning Jews as undesirable neighbours, proved to be more anti-Semitic in the 2008 EVS. The survey results suggest that anti-semitism is especially prevalent in small towns and rural areas.

Disturbingly, Belarusians have become more anti-Semitic since the 1990s, as can be seen when comparing the 1999 and 2008 EVS results in the figure below. 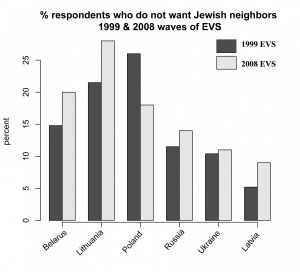 According to the Union of Belarusian Jewish Associations and Communities, many Jewish cemeteries in Belarus are in disrepair and some have been vandalised. Most Belarusian synagogues suffer from a lack of proper upkeep.

For example, the Hrodna synagogue, the oldest functioning synagogue in the post-Soviet space, was in desperate need of renovation. As restoration work was ongoing, in November 2013, a fire destroyed the facade of the synagogue and damaged floors and windows.

Many non-Orthodox Christian churches also suffer from a lack of funding and attention from the state.

The Shtetl project could mark an important step toward combating the ignorance about Jewish history and anti-semitism in Belarus. An added benefit is that the project will contribute to the development of cultural heritage sites in Belarus. Of the 119 thousand tourists who visited the country in 2012, nearly 80% came from Russia, mostly for gambling. According to Belstat, international tourists spend just four days on average in Belarus, which suggests they may be visiting the capital Minsk en route to Russia or Ukraine.

The meagre interest of tourists may result from Belarus’ negative reputation abroad and poor tourist infrastructure. Lonely Planet calls the country “Eastern Europe’s outcast”, stating on its website that “the country's flattening in WWII means that there's relatively little of historic interest to see”.

Tourist infrastructure is particularly poorly developed outside Minsk. Many historic buildings require restoration, especially in western Belarus, the area covered by the Shetl trails project. The border region presents additional challenges due to arduous customs procedures, which include humiliating security checks targeted at smugglers of cigarettes and alcohol.