US Politicians Better Informed about Belarus than a Top EU Official 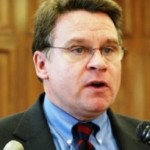 Thanks to Representative Chris Smith of New Jersey Belarus was at the center of discussions at the hearing held by US Congress Helsinki Committee earlier this week. Joao Soares, the President of OSCE Parliamentary assembly shared his views on political processes in Belarus with a group of US congressmen.

Joao Soares admitted that he did not follow what was happening in Belarus over the last months . His knowledge about Belarus was limited to a recollection of a meeting with Alexander Milinkevich and a general observation that Belarusian elections look fine the vote counting.

On the other hand, the US congressmen appeared much better informed about problems in Belarus. In particular, Rep. Smith, a long standing advocate of Belarus interests in Congress, shared his concern that China might provide Belarus technologies to censor internet. Representative Alcee Hastings mentioned that there would be a special hearing on the Belarusian issue this September.

Below are the excerpts from an unofficial transcript of the hearing.

REP. SMITH: Mr. President, one last question, how would you assess our mission, the OSCE mission in Minsk? I’ve met with both groups of dissidents, men and women who have been in and out of prison within the last month, and they are very conceded about the accommodation mood that they think the Minsk
mission has taken. Do you have any thoughts that you might want to share with us on that?

MR. STOARES: I have a good impression of the Minsk mission. Of course there are always human factors that we cannot control, absolutely, as you know better than me. But I remember the head of the – the previous head of the Minsk mission was a German diplomat and I remember the meeting that we have done
there with – (inaudible) – who are responsible for the Belarusian dossier and I talked about it.

We made initiatives as far as Milinkevich is concerned and I think we played a good role and I think we can – I don’t know how the changes. I don’t have recent news from the last months after the changes took place there. But my evaluation as far as what I could have seen in the previous years is a positive evaluation.

REP. SMITH: I do have one last question. Again, meeting with the opposition – (inaudible) – and some of the others in Belarus.

REP. SMITH: They’ve made it very clear at the Chinese government is assisting Lukashenko in developing a capability to use the Internet to repress the human rights and pro-democracy forces there. Have you gotten any information on that?

MR. STOARES: I know that the Chinese are very good experts in this kind of matters.

REP. SMITH: They are, right.

MR. STOARES: And they shouldn’t be proud of that. But we have to find ways of – and of course of dealing with it and pressing them not to do these kind of problems. But there are many other countries in the OSCE area where we have these kinds of problems.

REP. HASTINGS: I met with those opposition leaders as well and Chairman, hopefully Robert McNamara was meeting in one of the meetings and I indicated that I thought what would be helpful is for us to have a hearing to deal with the Belarusian issue and to do so – I forget the date or time in September – Robert is nodding to me and I hope we can accomplish that. All right, thank you. I’m sorry.

MR. STOARES: Belarus is a very good case where of course there is an authoritarian system. That came, if we see the beginning of the president, it came on a democratic way but after it turned on some non-democratic matters.

But where there are credible and popular opposition, people, leaders – I personally like very much Milinkevich and the role I was there with Alcee when we had a very nice press conference saying clearly that the elections were not free and clear because they were not free and fair and it was among all of them where I’ve been – and I’ve been in more than 30 – it was the worst I have seen and I remember that specifically with Congressman, Republican from Illinois, during this mission around Minsk and I remember very well this mission and in the end.

During the day it was absolutely marvelous. You have been there, music, food, children in every polling station. But after the problem was the counting. The counting we could not see.

SEN. CARDIN: There’s no question – there’s no question of the problems in Belarus from the point of view of democratic institutions. We took a delegation there last year. So we were in Minsk and had a chance to meet with
the president.

We had an opportunity to bring home an American who was being held inappropriately in their prison and if there is any hope here for some progress, it’s current desire to be more dependent from Russia, which might
give an opportunity for some progress to be made. But there are certainly issues that Congressman Smith has raised on the human rights issues that are pretty egregious and we would like to see some positive steps.

We don’t expect change overnight but we do expect progress and that’s a country of great interest to us. We are not giving up on any country in the OSCE as far as meeting its commitments under the Helsinki Final Act. Mr. President, you’ve been extremely generous with your time.

Read the full text at http://csce.gov.