For more than a month, Alexander Lukashenka has been threatening to stop exporting Belarusian goods via Baltic states’ ports, and to halt their transit via the Baltics and Poland. Alongside other measures taken by him, such as in the military sphere, the transit wars seem to be a concession by Belarus to Russia in exchange for Russia’s support in the post-election political crisis. However, in all probability, the Belarusian government does not in fact want to implement these policies.

On 9 October, deputy director general of Russian Railways Alexei Shilo said that his firm was capable of transporting all Belarusian oil products currently exported via the Baltic states to Russian ports. However, he warned that with regards to potash fertilisers—another bulk article of Belarusian export—Russian Railways would do so only on the condition that these shipments would not damage the interests of Russian potash fertiliser producers. Moreover, Russian news agency RIA Novosti reports that Russia does not in fact have sufficient port facilities to export Belarusian products.

Is Belarus finally getting on board with Putin’s plan?

Lukashenka launched regional transit wars on 28 August, when he responded to the Lithuanian government’s sanctions against Belarusian officials by demanding that Belarusian ministers table suggestions on how to reroute cargo away from Lithuanian ports. Following the Russian prime ministerial visit to the Belarusian capital Minsk that took place shortly after, it became clear that the cargo would go instead to Russian ports. In an interview on 28 September, Russian Energy Minister Alexander Novak said that “there is capacity at the ports of Primorsk, St. Petersburg, Ust’-Luga … The volumes can range from four to six million tons of oil products.” 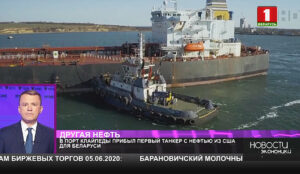 Belarusian TV positively covering the arrival of the first tanker with US oil to Klaipeda in June.

In taking these steps, Lukashenka may finally be bowing to the Russian government which for years has publicly demanded that Belarus join its plan envisioning an end to sending any non-container cargo through Baltic states’ ports by 2024. That could deal a heavy blow to Lithuania, as Belarusian cargo accounts for about a third of the Lithuanian Klaipeda port’s turnover (Belarus through this port exported 1.4m tons of oil products in 2019, with a projected 2m tons of exports this year). The share is even growing against the backdrop of the coronavirus recession and increasing oil flows from non-Russian sources coming to Belarus via Klaipeda.

As you have reported to me, almost 40% of trucks this year have come from Lithuania and Latvia. … How does the Customs Committee view the reorientation of these cargoes? And the development of our own logistics centres? We have created powerful logistics centres. But many services, including for our businesses and for the Eurasian Economic Union countries, are still provided in Lithuania. We can provide these services to these carriers in Belarus.

Indeed, since early September the Belarusian authorities have increased checks on transit cargo being shipped from Lithuania via Belarus. This has resulted in longer shipping times.

Multiple questions arise about the viability of such changes to transportation flows. First, Russian analysts consistently point out that the terminals in the Leningrad region of Russia lack the capacity to take on Belarus’ shipments. Even after new facilities start operating there in the next couple of years, the problem will not be solved for a key product among Belarusian exports—fertilizers. The total capacity of the terminals in the Leningrad region will not be sufficient to replace Klaipeda in Lithuania, which handled about 10m tonnes of fertiliser in 2019.

Second, Belarus is bound to incur economic losses. After testing Russian routes for export in 2018 with pilot shipments of Belarusian oil products, Minsk found the profitability to be approximately USD 10 per tonne lower than shipments through the ports of the Baltic states. This is despite a 50% discount granted by Russian Railways on tariffs for the transportation of oil products from Belarus. The distances are longer than to the Baltic states’ ports, and Russian ports provide less efficient and more expensive services. 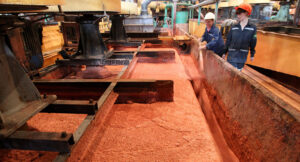 Potash fertilisers constitute one of the key export products of Belarus. Image: Sputnik

In the case of fertilisers, the expenses will increase even more. Currently, the Belarusian government is saving money because Belarus’ state potash fertiliser company, Belaruskali, owns around 30% of one of the terminals in Klaipeda. In addition, the Belarusian Potash Company is a shareholder of Fertimara UAB, a Lithuanian ship brokerage and chartering company.

The solution to some of these problems may be for Belarus to construct a new, large facility in Russia. Lukashenka has already suggested that Putin invest the USD 3bn remaining from a Russian loan to Belarus for the construction of a nuclear power plant into a port facility in Leningrad province. However, it will take years to get off the ground.

Not everything is decided and even commentators on Russian state-owned Sputnik have emphasised the need for top-level political agreements to arrange for the export of Belarusian oil products via Russian ports. After meeting Russian President Vladimir Putin on 14 September, Lukashenka implied that they were still not there: “I told him bluntly: if you offer such conditions as we have in the Baltics, we don’t care [which route we use].”

Besides financial losses incurred from redirecting export flows, Minsk may lose a major strategic project —diversification of its oil imports. After all, as late as in January the Belarusian leader demanded: “We have to achieve a situation when we will buy 30-40% of oil from Russia, import 30% via the Baltics and 30% through Ukraine.” In recent months, the Klaipeda port received oil from Norway, the US, and Saudi Arabia that went on to Belarus.

And Minsk apparently is eager to keep diversifying. On 6 October, a ship with Azerbaijani oil destined for Belarus arrived at the Ukrainian port of Odesa. 95,000 tonnes of crude demonstrate that the policy of oil source diversification is ongoing—however slowly. 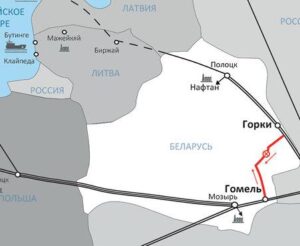 Red line shows the prospective route of a Homel-Horki link to connect the southern and northern routhes of Druzhba pipeline. Image: Mogilevnews.by

Furthermore, in recent weeks, the Belarusian government has announced that it is continuing negotiations with Poland over the shipment of US oil destined for Belarus via that country. On 1 November, Belarus plans to start constructing a link between the northern and southern lines of the Druzhba pipeline, which will enable two Belarusian oil refineries to receive oil from both Baltic and Black Sea ports outside Russia. For Belarusian political analyst Ihar Tyshkevich, these designs are

a step towards diversifying oil supplies and reducing oil dependence on Russia. … Even if these are not Belarus’ real plans, but a bluff, it shows the lack of “complete control” of Putin over the Lukashenka regime.

Most probably, Minsk is waging new transportation wars at the behest of the Kremlin and not as a response to the Baltic states’ imposition of sanctions on the Belarusian leadership. The past indicates that this is likely the case now. Belarus has repeatedly in the past threatened to “withdraw its exports from Lithuania”, but even the dispute between Belarus and Lithuania over a Belarusian power station failed to prevent the countries from developing economic relations and Lithuania handling Belarusian cargo in Klaipeda.

The Baltic states depend on the Belarusian cargo flow—especially since Russia withdrew its cargo and started starving their ports about three years ago. However, Belarus will suffer badly as well. The shrinking political economy of joint development in the region undoubtedly will result in radicalised confrontation in the region and less stability and security. Both the Belarusian government and the opposition should be aware of this possible geopolitical catastrophe.