At the end of March, Aleksander Lukashenka gathered the management of Belarus' scientific institutions and top government officials to discuss the problems of Belarusian science.

The meeting revealed that much of what the National Academy of Sciences brands as its cutting-edge achievements are simply revamped successful projects from Soviet times and have no breakthrough value today.

Two major factors that explain the low productivity of Belarusian science have to do with ageing researchers and their international isolation. These problems stem, among other things, from poor financing and restrictive bureaucratic rules.

Whereas the government cannot overcome its budget constraints quickly and increase expenditures on research-and-development dramatically, it could, at least, change the rules that hinder the internationalisation of Belarusian science.

In Aleksander Lukashenka’s opinion, Belarusian scientists fail to deliver world-class results. At the meeting in March, he named only a few noticeable achievements from recent years: the creation of a supercomputer, a Belarusian satellite, a medicine that fights cancer, transgenic goats, and the establishment of a centre for cellular technology.

Independent experts, however, criticise even these achievements. According to the former President of the National Academy of Sciences (NAS) Alexander Vaitovich, the satellite that the authorities take pride in has only one Belarusian component and its creation dates back to the 1970s. And the widely advertised Belarusian supercomputer hardly breaks into a Top-30 list of similar technologies in a ranking of Commonwealth of Independent States, not to mention world rankings.

The statistics of the State Committee of Science and Technologies that demonstrate a 75% growth in the number of registered intellectual property patents in recent years were not very impressive for Lukashenka. He demanded real global-level breakthroughs that would expedite the economic development of the country.

But the situation has failed to improve recently. And at least two factors account for the current state of things: a growing gerontocracy and international isolation of Belarusian scientists.

Compared to 1985, the number of scientists in Belarus has decreased by 30% and their average age has risen considerably. According to a study by Andrei Laurukhin of the European Humanities University, today pensioners make up more than 60% of all the professors and more than 40% of the kandidatskaya degree (a PhD analogue) holders. In 1988 these numbers stood at 35.8% and 5.9% respectively.

Humanities, social and natural sciences have experienced the biggest damage. For example, the share of humanities representatives in the overall number of Belarusian scientists has faced a sevenfold decline since 1988.

Financial shortages appear to be the main culprit behind why many young Belarusians refuse to choose careers in research or look for academic opportunities abroad. In 2013, all scientific organisations combined in Belarus received about $250 million in government funding, which equalled 0.46% of the GDP. Companies’ investments in R&D, according to the State Committee of Science and Technologies, were even smaller.

Compared with developed countries, these figures look modest. The average level in the EU stays at 2-2.5% of the GDP. And the world’s average is about 1.7% of a country's GDP.

In a regional context, Belarus also lags behind most of its neighbours. According to the Research and Development Expenditure study by the UNESCO Institute for Statistics, in 2012 Belarus outperformed only Lithuania. 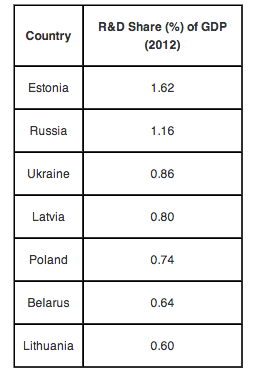 Such low numbers result, among other things, in poor salaries for Belarusian scientists. The average salary of a NAS associate is around $450-550 a month. To put it into a regional perspective, the average salary at the Russian Academy of Sciences hovers around $1,100. One can hardly expect the best Belarusian scientists to stay in research institutions at home considering such a striking imbalance.

Not surprisingly, therefore, an estimated 4,000-5,000 researchers have left Belarus since the mid-1990s. And fewer and fewer young Belarusians aspire to become scientists in their native country.

Another reason for the low productivity of Belarusian science – its international isolation – results from specific government policies in this field. Thus, one can even call it self-isolation.

In 2004, a presidential decree established a list of journals regarded as scientific in Belarus. The list contains no original English-language periodicals. In other words, the leading international academic journals with the highest impact factor indicators have no proper legal status in Belarus. Whether Belarusian researchers can refer to such “illegal” journals in their dissertations depends on the goodwill of the Highest Attestation Commission (VAK), a governmental body that oversees the awarding of advanced academic degrees.

Obviously, this does not stimulate Belarusian researchers to monitor world-leading journals and submit their papers to them. Instead, they have an incentive to keep track of Russian language journals, the majority of which do not enjoy real recognition by the international scientific community.

As a result, Belarusian scientists and research institutes remain chronic outsiders in the Hirsch index (h-index), which measures the productivity and impact of scientific publications in the world. Belarusian researchers’ impact is absolutely marginal in a global context, which also points to the isolation issue.

Others had a low or zero h-index, which means that the majority of Belarusian researchers make no contribution to global science at all. Their publications go unnoticed by colleagues across the globe and stay within the attention of very limited audience.

One may argue that the Belarusian authorities cannot resolve the issue of low budget allocations on sciences very quickly as the economic situation in the country grows more precarious by the quarter.

Within the existing economic model, they even have difficulty stimulating R&D expenditures by companies. Still, they could at least amend the restrictive rules that literally keep Belarusian science isolated from the rest of the world.

This would be a more effective measure than increasing the productivity of Belarusian science by means of multiple meetings in the presidential office.