Belarusian Authorities Battle Street Vendors to Save the Textile Industry

On 17 March, Belarusian President Alexander Lukashenka paid a personal visit to a popular bazaar in Minsk, the capital, to resolve a conflict between the authorities and local street vendors.

Earlier this month, a new government request was issued requiring all street vendors to obtain quality certificates. That prompted the vendors to go on strike.

Although Belarusian officials handpicked the vendors who met with Lukashenka, the president's speech at the bazaar at least acknowledged the main cause of the conflict. He stated that the Belarusian textile sector is being undercut by cheap imports from Russia.

What Lukashenka failed to mention is that Belarusian clothing chains also want the government to introduce new regulations in order reduce competition from street vendors.

Although the authorities pretended to make concessions, the street vendor strike has been a lost cause. The fragmentation of this small business movement is one of the main reasons it has failed to achieve its goal.

The Force that Does not Feel Its Power

Individual shop owners play a much greater role in Belarusian commerce than is commonly believed. Official figures show that 248,952 people were registered as individual entrepreneurs at the beginning of this year, representing 2.5% of the Belarusian population. Since this group employs roughly the same number of people, the total workforce active in this segment of the economy could represent as much as 5% of all Belarusians.

Although accurate data is lacking, it is estimated that about 100,000 of these self-identified entrepreneurs are sole proprietors of stalls who trade in the markets where many Belarusians still buy their clothes. The authorities have sought to clamp down on the activities of this group of entrepreneurs. The sheer size of the street vending sector has not prevented the authorities from introducing tedious regulations every few years. 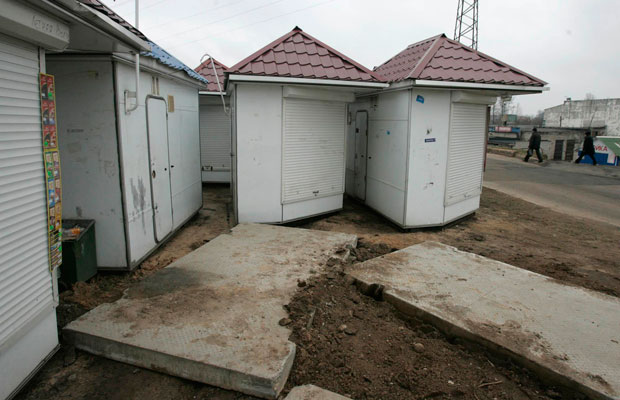 The most egregious example is a 2008 ban on the hiring of non-relatives, which effectively forces sole proprietors to set up firms in order to hire workers legally. Also in 2008, the last private kiosk disappeared from Minsk; the authorities deemed this type of business outdated, even though it was quite cost-effective and doing well at the time. Eight years ago, Minsk had 4,000 such kiosks.

Moreover, the regime often arrests local leaders who seek to organise the interests of street merchants. Anatol Shumchanka, head of the business association "Perspective", served prison sentences in 2003, 2008, and 2013.

The 17 March visit of Lukashenka to the Minsk market was a rare show. The president, now at the outset of another reelection campaign, likely wanted to show who is in charge. The secret service officers who accompanied him hand-selected street vendors with congenial attitudes to serve as his audience. The market was also full of police who frisked shoppers with metal detectors.

Lukashenka proposed his idea on how to resolve the conflict: Rather than apply for a quality certificate, street vendors will now be asked to pay higher taxes. The hand-picked audience of street merchants dutifully applauded the announcement.

Lukashenka's staged meeting with the street merchants could possibly end their strike, which dates back to 1 March. According to the association "Perspective", around 80% of local street vendors took part in the strike.

Belarusian entrepreneurs lack quality certificates because they buy clothes from Moscow wholesalers who do not have them either. If the new regulations are enforced, the retail price of clothes could rise so much that ordinary Belarusians may not be able to afford them. Lukashenka stated that the new regulation will be postponed and introduced only next year. 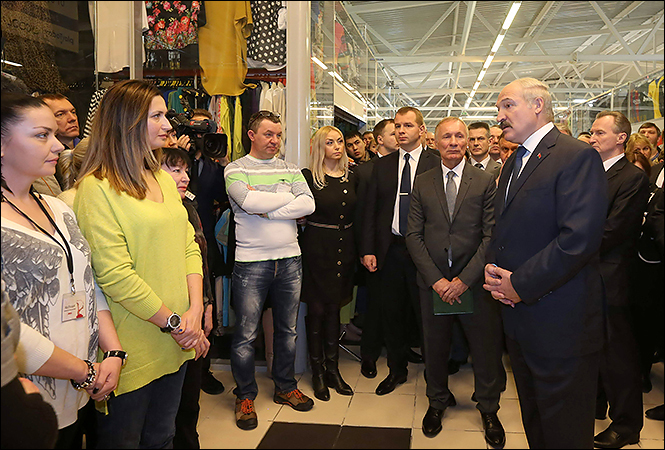 The president accused individual entrepreneurs of "decimating" the Belarusian textile industry by procuring cheap clothes in Moscow. Since most of Belarus's textile industry is run by the state, the choice seems simple: either state employees or private businesses will be deprived of income.

Lukashenka stated that Prime Minister Andrei Kabiakou takes responsibility for supplying Belarusian commodity distribution centres: "If entrepreneurs cannot acquire [here in Belarus] the types of garments or footwear they get at the Cherkizovsky market [the most popular market in Russia], Andrei Kabiakou will answer for this." The reality is that made-in-Belarus products are more expensive and of worse quality than those sold in Russia. Forcing vendors to procure locally will fail to solve the problem.

Another interest group lobbying the government behind the scenes are supermarket chains. They already have the requisite quality certificates, and so have good reason to demand that individual street vendors obtain them as well. Aliaksandr Mashenski, one of the most influential Belarusian businessmen, stated that "entrepreneurship should be pursued in a civilised manner."

Mashenski may be right, but the new regulation still looks strange, as such a rule has not been instituted for over 20 years. Reduced competition will simply help large retailers stay afloat during the current economic crisis.

At the same time, it seems the authorities have realised that small entrepreneurs cannot afford to comply with the new requirements. Aliaksiej Novikau, a small entrepreneur from Salihorsk, told Belarus Digest that "the Minsk traders can take on the burden, but for vendors elsewhere it would spell the end of their business."

Why are the authorities making such a fuss about fighting a group which represents a small segment of the national economy? In fact, this conflict could become the most difficult for private businesses in Belarus since the early 1990's. It's not just that the authorities are making unreasonable demands in the form of certificates and higher taxes; the worst thing is that this is happening at a time when the Belarusian economy is preparing for a recession.

It is precisely the threat of economic crisis that strengthens the government's hand. Relations are tense among individual entrepreneurs who are struggling to make ends meet, so they cannot concentrate on battling Lukashenka together. “Many try to somehow negotiate with the government officials because they need to feed their families," Novikau said.

Such internal conflicts could reduce the leeway for entrepreneurs to lobby for their interests in the future. Many will be forced to close their businesses and let go of their workers. They will only stand a chance of influencing the authorities if they stay united, but it seems they will not.

Lukashenka's postponement of the certificate demand looks like a temporary victory, but that will not change the fundamental relationship between individual entrepreneurs and the government. Every step Lukashenka takes, the businessmen follow, even at great cost to their livelihoods.