Belarus has never had anything resembling the number of migrants it has recently experienced. Over the past 12 months the Belarusian population, thanks to the 100,000 refugees from the Donbas, has increased by 1%. Indeed, Belarus has more Ukrainian migrants per capita than any other country.

Belarus is not a particularly attractive destination for migrants, since it does not offer much in the way of social benefits or employment opportunities. For a long time Afghans, who came to Belarus in the 1980s and 1990s, accounted for 70% of all the country's refugees.

These days, the picture is rapidly changing. The number of Syrian refugees remains minimal but the sheer volume of people migrating from the Donbas has put serious pressure on Belarus' economy and has even contributed to the growing crime rate.

Belarus has never been particularly attractive to immigrants for a number of reasons. The public authorities are under no obligation to provide refugees with housing, a means of subsistence, or even language courses. Refugees can apply for additional support (which the state has the right to deny them) like food, clothing, travel and accommodations, but this assistance has a $200 ceiling. Therefore, migrants usually use Belarus as a jumping off point en route to the European Union. 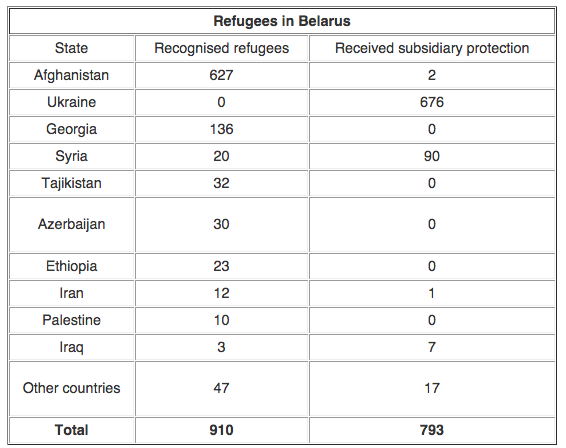 Refugees usually come to Belarus from the Middle East and former Soviet republics. As is true with most countries in Europe, Belarus differentiates between refugees and people who have emigrated for humanitarian reasons (subsidiary protection).

​Afghanis have long been the only major group to receive refugee status in Belarus. It started in the 1980s, when many Afghanis who came to the Soviet Union to study decided not to return home. The stream of migration continued through the 1990s, as more of them came to Belarus to reunite with their families.

Since the beginning of the war in Syria, Belarus has attracted more and more Syrian refugees. In 2013, 63 Syrian citizens applied for asylum in Belarus. Syrians receive significant assistance from the international community in Belarus. The state media has repeatedly put out stories about the Syrians living in Homiel in an apartment that was purchased for them by the United Nations.

While many Syrians have trouble negotiating the local language, Afghans are a good example of immigrants adapting to Belarus. So far, it would appeas that the Belarusian media has never once reported of there being any problems with Afghan refugees. Others migrants tend to come from countries where Russian has at least some presence in public life, so it is easier for them to adapt. For instance, the author’s classmate from Georgia was able to learn Belarusian in just a few years.

In 2014 and 2015 more than 100,000 Ukrainians made their way to Belarus, thus increasing the country's population by more than 1%. Migrants from Ukraine do not hold refugees status, as Ukraine is not formally in a war and its citizens that coming to Belarus are not persecuted in Ukraine. Most of them obtained either a permanent or temporary residence to live in Belarus. Generally, migrants say that the government and the Red Cross provide around a $ 250-300 one-time allowance for each person to help them readjust.

While the appropriate data is not available, it seems, according to media outlets, that most Ukrainians are able to find work in agriculture, construction or commerce. A large number of migrants have settled in rural areas, where some have even managed to secure either an apartment or a house for free. As Aliaksandr Lukashenka mentioned last year, "we need a labour force, and we are ready to settle them in various parts of the country, provide them with shelter and jobs.”

The Belarusian authorities hope that Ukraine's refugees will help to rescue the country's agricultural sector, as it continues to decline. Despite the low salaries, many Ukrainians are inclined to work in agriculture, if for no other reason, than the absence of war.

According to an decree signed by Aliaksandr Lukashenka, migrants from the Donetsk and Lugansk regions of Ukraine have access to social services such as kindergartens and hospitals. However, while teenagers from the Donbas can go to Belarusian schools for free, they still do not have money for buying books or the required school uniform.

In June, many media outlets reprinted a statement by a representative of the Belarusian police who made light of the problems Belarus was facing when trying to deal with the “mentality of the refugees”. According to him, the police have to explain to migrants from the Donbas that it is illegal to cross the street when there is a red light or drink beer out in public places.

The police reported several cases where individuals from the Donbas got in fights after squabbling over politics. Since the beginning of 2015, the crime rate among individuals coming from Ukraine has increased by 30% according to the Belarusian police. In 2014 crime was also an issue among them, prompting Belarus to deport 200 Ukrainians last year.

The most serious issues revolve not just around crime, but the effect of Ukrainian migrants on the labour market. Most of them are willing to work for a salary several times lower than what a Belarusian would find acceptable. This makes it even harder for Belarusians who have lost their job due to economic recession to regain footing.

Mikhail Miasnikovich, former prime minister and current head of the upper chamber of the Belarusian parliament, said in April that the Ukrainian immigrants "have created a certain amount of pressure on the economy.” According to him, “Belarus has to think about employing its own people, not just help out our Ukrainian friends.”

On 15 July, UNHCR Representative in the Republic of Belarus Jean-Yves Bouchardy appealed for more support for refugees from Ukraine, as his organisation lacks funding to help Belarus and mostly concentrates on Syrian immigrants who have received refugee status. “They are in a worse position than Ukrainians because they do not speak Russian, which seriously hinders their employment opportunities,” mentioned Jean-Yves Bouchardy.

According to Ihar Shunevich, the Minister of the Interior, some Ukrainians have already left Belarus. This is due to the fact that Belarus appears to be unprepared for migration on this scale and cannot support everyone coming in. This might have been different, but Belarus has thus far failed to engage the international community in the name of supporting Ukrainian refugees.