If you live outside the realm of the former Soviet Union, chances are you never celebrate 8 March, International Women's Day.

However, for Belarusian men this holiday brings an eternal conundrum of how to celebrate the women in their lives – colleagues, mothers, sisters, wives, daughters etc.

In Soviet times it became a very popular holiday for glorifying the deeds of Clara Zetkin, Rosa​ Luxemburg and other conscientious, working women. Since then the emphasis has somewhat shifted, and consequently the femininity and beauty of Belarusian women has come more into focus.

Together with the usual flowers and confectionery, there exist at least eight other things that would make any Belarusian woman happy this 8 March. Below is a sample list of ideas: 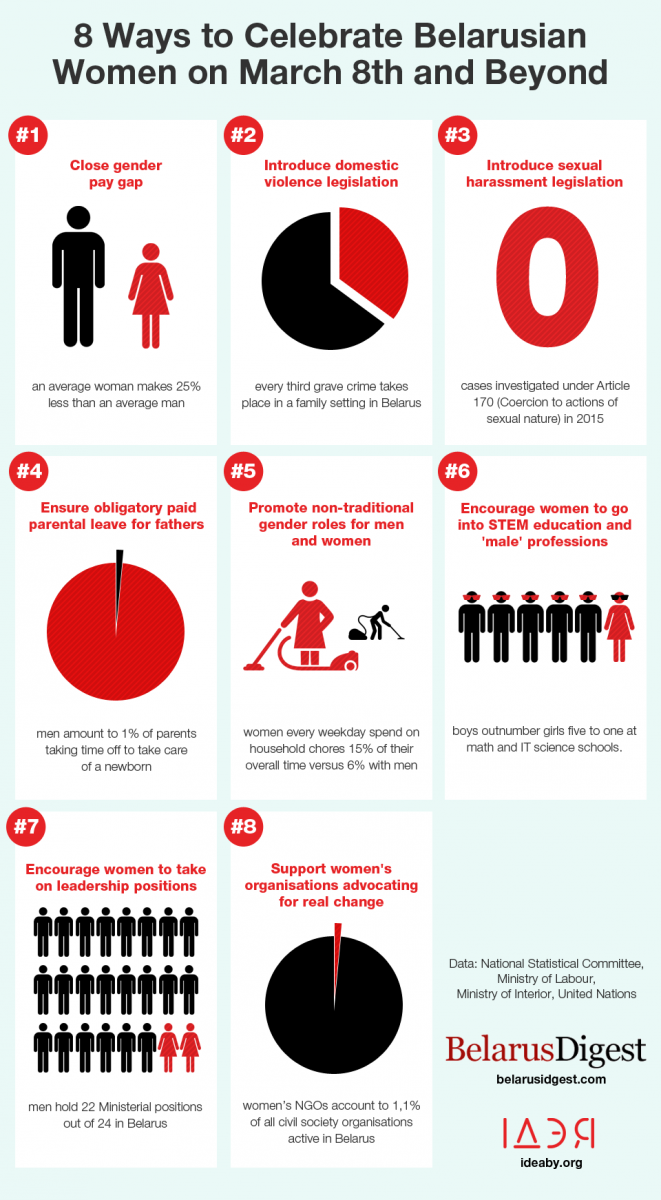 According to Belstat statistics, 85.3 per cent of women above the age of 15 in Belarus are economically active, or simply put – work. Therefore, they could all benefit from state policies geared at closing the gender pay gap. The gender pay gap in Belarus remains large: the average woman makes 25 per cent less than the average man.

Women tend to work in service-oriented spheres like education and healthcare, which also happen to have the lowest remuneration rates in Belarus. There are also fewer women among high-ranking managers, decision-makers and business owners, and there is overt discrimination of women in the labour market. As a solution some European companies choose to report their gender pay gap and together with gender equality experts seek ways to close it.

Every third grave crime – and the Ministry of Interior defines only murder or assault and battery as grave crimes – takes place in a family setting in Belarus. This means that Belarusian women face fatal danger from their intimate partners. Older people – both men and women – may also face attacks from their children, who in some instances beat them up to take their meagre pensions away.

And yet Belarusian legislation has no separate law on domestic violence. Considerable progress came in 2014, when amendments to the current Criminal Code defined for the first time the notion of domestic violence, victim, and abuser, and introduced innovative measures including restraining orders. These measures are welcome but insufficient. Domestic abuse continues to go on unpunished.

Article 170 of the Criminal Code of Belarus stipulates that coercing anyone into having a sexual relationship or other sexually-motivated action against their will using blackmail, overt threats or professional power dynamics is punishable by up to three years in prison. This neither defines sexual harassment nor makes it possible for women to prove anything in the courts. This is why, according to Ministry of Interior data, the year 2015 saw zero cases investigated or prosecuted under this Article.

Traditionally women hear a lot of nice words about their parenting skills on this day. Indeed, women continue to be the primary caregivers in the Belarusian economy for both children and the elderly. According to the Ministry of Labour, men take only 1 per cent of the total time taken off by parents to take care of a newborn. While praise is in order, women’s professional development often stalls following childbirth.

Many employers consequently view women as unreliable workers because they tend to take time off when children fall ill. This translates into lower wages and fewer growth opportunities for female workers. And this in turn feeds into the aforementioned gender pay gap. More equally distributed childcare responsibilities will eventually feed into fewer gender stereotypes for both parents. Furthermore, men will surely better appreciate women’s domestic labour if they themselves spend at least a couple of weeks taking care of children full time.

Gender roles remain rigid and unforgiving, punishing those people who choose or happen to step outside of them. As a consequence, very few do so in Belarus. Men continue to be mostly breadwinners, while women take care of the house and children.

Even if both parents work outside the household, women tend to do a lot more household chores than men. According to the preliminary results of the UN and Belstat Time Use Survey, in Belarus women every weekday spend more than twice as much time on household chores – 15 per cent of their overall time versus 6 per cent for men, and consequently have only 28 minutes of free time, whereas men have 40 minutes daily.

6. Encourage women to go into STEM education and 'male' professions

STEM stands for science, technology, engineering and mathematics. Traditionally men dominate these spheres. Girls tend to choose humanitarian disciplines, which consequently lead them into lower paying jobs. Women also tend to go into ‘service-oriented’ professions: Belstat data suggests that 83 per cent of teachers and 85 per cent of doctors in Belarus are female.

The opposite is true of computer science: boys outnumber girls five to one at maths and IT science schools. And as Belarus has found its place in the international IT markets, programming has become a high-paying occupation. Countries all over the world seek to attract girls and women into STEM professions by setting up mentor programmes, with women leading other women by example and guidance.

Belarus ranks well on women’s representations in parliament. Today women occupy 30.1 per cent of parliamentary seats. Yet, many would argue that parliament has no real authority and merely rubber-stamps the executive decision of the government.

In the positions of power that really matter women tend to be few. Men hold 22 ministerial positions out of 24 in Belarus. Two female ministers yet again head service-oriented ministries: Mariana Shchotkina is the Minister of Labour and Social Protection, while Liliya Ananich heads the Ministry of Information. There are no women regional governors. Women tend to occupy low and mid level management, but few reach the top management positions either in education or industry.

Over the past 15 years the number of women’s NGOs has fluctuated between 17 and 38, and has currently stabilised at 30. This accounts for 1.1 per cent of all civil society organisations active in Belarus. Such a low number may testify to two things: low self-awareness among women about their issues, or the lack of financial resources available for women’s causes, or maybe both.

None of these things can in reality be gifted to women, but rather women will continue to work on them for themselves. However, men very much need to be part of this process. This list serves as a suggestion and by no means should be regarded as complete.

And yes, happy 8th of March, International Women's Day to you and yours!