The fair attracted so much attention in part because international education remains out of the reach of the majority of Belarusian students.  Challenges that European students never worry about, such as obtaining a visa, financing their education, or even academic preparation, force many young people to stay at home.

In the long run, this growing body of well-educated and open-minded citizens could bring about positive social change in Belarus. Whether this actually happens depends on how many students participate in international exchanges and how many intend on returning home.

When only a very small number of students, those with exceptional credentials and sky-high ambitions, are able to obtain international scholarships, study abroad may become a one-way ticket. A greater availability of short-term academic exchanges may, on the other hand, contribute to promoting a greater number of well-educated and interculturally competent citizens who live and work in Belarus.

According to UNESCO, the number of students who study abroad is growing by about 12% each year. Belarusians became a part of this global trend only in the mid-2000s. Since 2007, the number of Belarusians studying abroad has hovered around 30,000, facilitated by the growth in programmes that provide funding and help with visa applications. These include the Erasmus programme, German Academic Exchange Service (DAAD), Muskie Graduate Fellowship, and others. 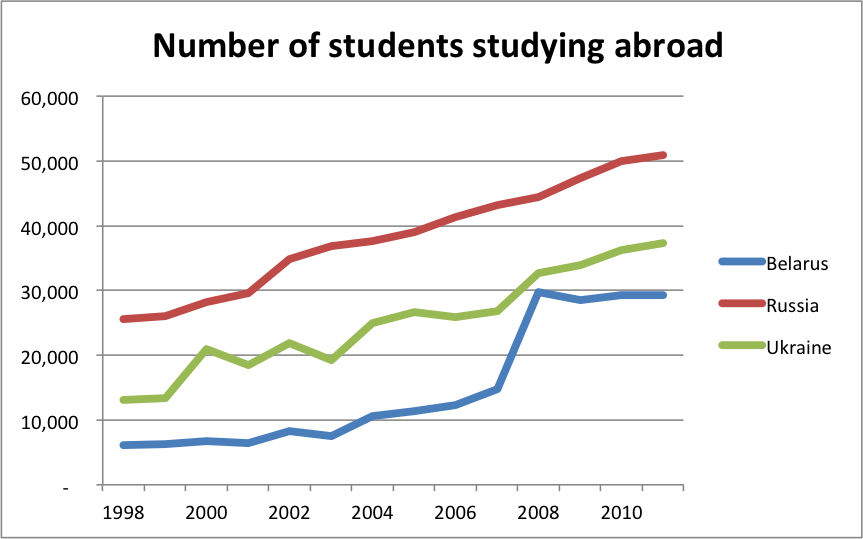 Erasmus is perhaps the most popular European student exchange program. In 2014, all existing EU programmes in the fields of education, training, and youth were combined into Erasmus+.

The expanded programme will provide opportunities for over 4 million Europeans to study, train and volunteer abroad for a period of at least three months to an academic year.  Of these only around 200 scholarships will become available in 2012-2016 for Belarus, a country with over 450 thousand students. 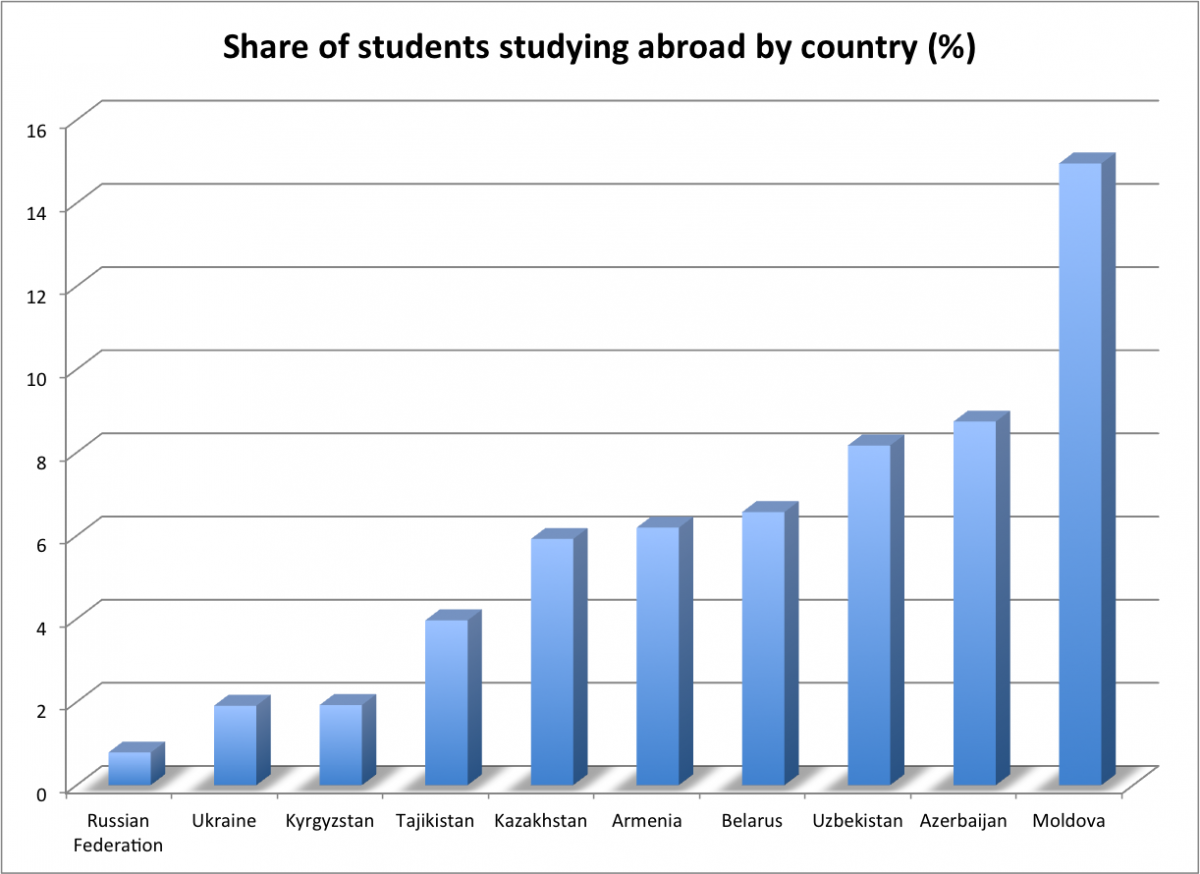 Because the Polish government funds education only in Polish and only for students who have the Pole Card (Karta Polaka), most of them pay for their own education. A limited number of scholarships exist. For example, Kalinowski scholarship targets ambitious Belarusian pro-democracy activists.

Not surprisingly, the scholarship has fallen out of favour with the Belarusian regime, which complicates the return of the scholarship's recipients to Belarus.

Unfortunately, Belarus, along with Uzbekistan, no longer participates in the Future Leaders Exchange Program, which targeted high school students. All US State Department programmes include provisions that require students to return home for a minimum of two years.

Russia imposes perhaps the fewest barriers for Belarusian students. Not only do most Belarusians speak Russian at home, but they can also compete in the same category as the Russian applicants when applying to Russian universities. Upon admission, Belarusians are entitled to a stipend and living accommodations on par with their Russian peers.

Obtaining a Schengen or US visa and financing education in the West at times present insurmountable difficulties, given the disparities in income between western countries and Belarus. An even greater challenge, however, is obtaining a degree that would qualify Belarusian applicants for education abroad.

The Belarusian education system falls short of the Bologna standards, with the absence of academic freedom being the most important shortcoming. Belarus failed to join the Bologna process, a system designed to ensure that higher education standards are roughly equivalent and help to promote freedom of movement within Europe. This ‘Bologna isolation’ has prevented many young generations of Belarusians from participating in European student exchange programmes.

Despite the shortcomings of the Belarusian educational system, Belarus has itself become a popular destination for international students. By 2013, the number of foreign nationals attending Belarusian universities and colleges had reached 14,000. 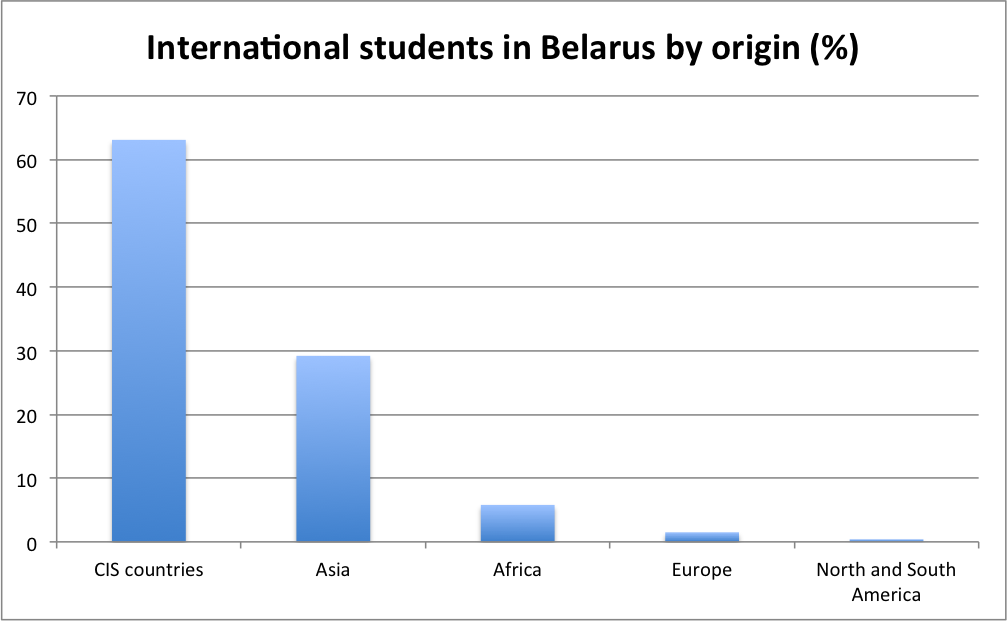 Belarus hosts students from about 88 countries. Two thirds come from post-Soviet states, roughly one third – from Asia. Europe accounts for a mere 1.5% of students. In the 2012/2013 academic year, citizens of Turkmenistan accounted for 53% of the total number of international students in Belarus.

On rare occasion, Belarus hosts US students. For example, a few years ago the University at Albany offered a service-learning course in Belarus focused on the impact of the Holocaust in Eastern Europe. The students stayed in hotels and with host families in Belarus and were involved in the preservation of a neglected Jewish cemetery. Speaking Belarusian or Russian was not required to join the course.

As a growing number of Belarusians travel abroad, analysts fear brain drain. Studying abroad increases the likelihood of subsequent employment and residence in a foreign country. Students from a country with numerous socioeconomic and political problems such as Belarus may be especially prone to seek emigration.

According to the Belarusian Ministry of Internal Affairs, however, most Belarusian students return home upon completion of their studies. Employment and residency barriers in western Europe may explain a high rate of return. Numbers could be even lower if the Belarusian government creates favourable employment opportunities for Belarusians with international educational experience.

A study funded by America’s National Science Foundation concluded that only 32% of Mexicans with US PhDs still live in the US five years after graduation. With appropriate policies in place, even the best and the brightest may want to return.

Students who do return upon completion of their study contribute to the economic and political development of their home country. The Belarusian economy desperately needs well-trained professionals proficient in a foreign language, as only 5% of Belarusian citizens are proficient in English, according to the Belarusian state statistical agency Belstat.

Even fewer young specialists possess the necessary intercultural competence or care about international politics. In the long run, the growing share of well-educated and well-travelled citizens with ties to democratic countries could foster positive social change in Belarus.