An Action Movie Accompanied by Balalaika

Very few remember that in 1993, the Belarus House of Government was stormed by some Alexander Lukashenka who was then a member of the Belarus parliament. Police did not let Mr Lukashenka inside the building, but he was breaking... 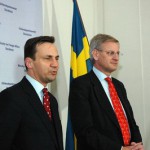 Foreign ministers of Sweden, Germany, the Czech Republic and Poland published a strongly worded opinion in the New York Times. According to them, Europe has not seen in years anything like what happened in Minsk on bloody Sunday of 19 December 2010. Below is the full text of their statement:

There can be no business-as-usual between the European Union and Belarus’ president, Aleksandr Lukashenko, after what has happened since the presidential election in Belarus last Sunday.

In recent months, the hope grew that his words could be taken seriously. He promised to invite international observers to the election, and he delivered on the promise. He talked about giving the opposition some space during the election campaign, and there were some improvements.

The E.U. responded by suspending sanctions and with a generous offer of conditional political dialogue, economic cooperation and the possibility of financial assistance. It would have been in the interests of both Europe and the people of Belarus to continue.

Mr. Lukashenko probably understood that he would not get the required 50 percent of the votes needed to avoid a humiliating second round against a single opposition candidate. All independent exit polls gave him significantly less than this. While the voting proceeded in an orderly fashion, the counting of the votes turned into a charade. The report of the independent observers assessed the counting as “bad” or “very bad” in nearly half the polling stations they could observe, and it is not unreasonable to assume that it was even worse in the others.

It was obvious that there were orders not to count the votes, but to deliver a predetermined result. There is no way to know what the real result of the election was. The exit polls give interesting indications, but no more. What is abundantly clear is that the announced result has no democratic legitimacy whatsoever.

Opposition candidates were beaten, dragged away and detained. Hundreds of campaign workers were also rounded up and taken to prison. Summary trials produced sentences without any basis in facts. Political prisoners have become the new reality. Repression is the stated policy.

Europe has not seen anything like this in years. The combination of vote rigging and outright repression makes what Slobodan Milosevic tried to do in Serbia in 2000 pale in comparison. What we have seen brings back memories of the introduction of martial law in Poland in 1981.

Where will this end? The forces of repression might carry the day, but the wounds in society will not heal, and a siege regime will clearly not survive forever. Prospects of money from the West to save a deteriorating economic situation have in all probability gone up in smoke. Investors will be wary of a country that has so spectacularly shown its contempt for the law.

The European Union is founded on values of human rights, democracy and the rule of the law. It will not stand indifferent to gross violations of these values in its own part of the world.

Continued positive engagement with Mr. Lukashenko at the moment seems to be a waste of time and money. He has made his choice — and it is a choice against everything the European Union stands for.

But there are many in Belarus who know that his clock is ticking — and are discreetly preparing for a better future.

Our many conversations with representatives of different parts of Belarus society have convinced us that the country wants to be part of a free and prosperous Europe. We must now deepen our engagement with the democrats of Belarus and those inside the government who disapprove of the fateful turn their country has taken. They must not be abandoned or betrayed as their country enters what might be a new dark era.

The best test of our own values is what we do on behalf of the powerless. Europe must not be mute.

Carl Bildt, Karel Schwarzenberg and Radoslaw Sikorski and Guido Westerwelle are the foreign ministers, respectively, of Sweden, the Czech Republic, Poland and Germany.