1 May 2019
The Ostrogorski Centre presents a new analytical paper ‘Reforming the Research & Development Sector in Belarus: Challenges and Possible Solutions’, written by Andrei Kazakevich and Kiryl Haroshka. The paper primarily based on suggestions made during a conference on reform of Belarusian... 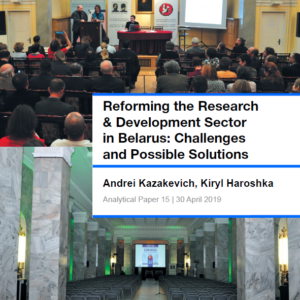 Dedicated to the issues of higher education and its reforms in Belarus, the conference allowed academics, practitioners and administrators to discuss the existing problems and possible solutions. The main topics concerned new forms of practice-oriented business education at masters level, modernization of higher education at entrepreneurial university framework, reforms of Belarusian scientific research, and the issue of plagiarism at Belarusian universities.

The paper suggests that in order to build a modern economy, Belarus should increase research spending to at least 2008 levels ($240 million). However, any increase in public budgetary spending needs to be supported by appropriate reforms in science and higher education in order to increase the efficiency of public spending.

The most pressing issues include increasing transparency across the R&D sector; increasing the role of open competitions for the state’s scientific grants; changing the model of financial incentives; resolving conflicts of interest in research management; developing research in higher education and changing the principles used to evaluate the results of scientific activities.

The major conflict of interest in the R&D sector relates to the special status and powers of the National Academy of Sciences of Belarus. Universities should expand their research activities through either unification with research institutions, or a significant increase in spending on science.

The basis for evaluating the results of scientific activities among researchers should be through publications included in international citation indices (especially Web of Science and Scopus). At the same time, there should be developed mechanisms minimising the negative effects that may occur from the adoption of international assessment systems, in particular for individual disciplines and academic communities.

The research proposes recommendations on how to reform the research & development sector in Belarus. In particular:

1.Research and development expenditures. Since 2008 Belarusian science has developed under adverse conditions associated with a significant reduction in public and private funding. In order to preserve and develop the country’s research potential in the coming years, it is necessary to increase budgetary expenditure on R&D at least to the level of 2008 ($240 million), as well as stimulate spending on R&D from commercial organisations. At the same time, the increase in expenditure should be accompanied by reforms aimed at increasing the efficiency of public funds’ allocation, such as increasing transparency and strengthening the role of competitive and project financing mechanisms.

2. Forecasts. Forecasting the development of R&D sector should be more realistic and not set unattainable objectives – in particular, not aiming at the rapid growth of R&D to 2% of GDP or higher. Over the next five years, achieving expenditure on research and development in the range 1–1.5% of GDP should be considered as an optimistic scenario.

3. Transparency. The R&D sector should become more transparent, and the distribution of finance more understandable and open to members of the research community, as well as to society as a whole. It is necessary to oblige state-funded research institutions to publish narrative and financial reports. Additionally, financial reports and detailed narrative reports should be published upon completion of all national research programmes.

5. Conflicts of interest. In R&D sector conflicts of interests should be excluded, primarily related to the special status of the National Academy of Sciences of Belarus. Its authority to coordinate research, to control budget spending, to redistribute funds, to define national research programmes, and to certify should be transferred to the ministries, primarily the State Committee for Science and Technologies. In turn, the Academy should concentrate on research activities and solving other scientific problems.

7. Criteria for assessment of research activity. The main criteria for the assessment of research activities should be publication and citation indices in international scientific publications (primarily Web of Science and Scopus). In doing so, mechanisms should be developed that would minimise the negative effects of the international assessment system for individual disciplines and academic communities. Evaluation of the results of scientific activity should affect career prospects and the level of wages in the system of higher education and academic research institutions. At the same time, special incentives should be developed to increase the number of publications in English.

8. Nationwide research database. It is necessary to create a nationwide database of publications and citations. Such a platform can be useful not only for scientists, universities, research institutes but also for periodicals and regulatory bodies.

9. Development of language skills. It is necessary to change completely the approach to the linguistic training of graduate students and scientists, including by compensating the costs of commercial courses for the most active researches. Language skills of researches must be confirmed using the international testing system (for example, IELTS and TOEFL). 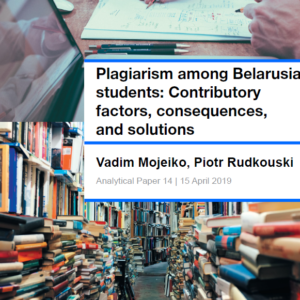 Dedicated to the issues of higher education and its reforms in Belarus, the conference allowed academics, practitioners and administrators to discuss the existing problems and possible solutions. The main topics concerned new forms of practice-oriented business education at the masters level, modernization of higher education at entrepreneurial university framework, reforms of Belarusian scientific research, and the issue of plagiarism at Belarusian universities.

The analytical paper suggests that written assignments remain particularly vulnerable to various dishonest
practices – plagiarism being the most conspicuous. At least 50% of Belarusian students plagiarise. They commit all varieties of plagiarism, although “compiled” and “copy-paste” plagiarisms occur most frequently. It is very likely that a significant percentage of Belarusian students studying at Western-type universities also resort to plagiarism.

There is remarkable tolerance of plagiarism within the Belarusian education system. Lecturers are generally lenient when it comes to punishments for plagiarism. There are no critical thinking and/or academic writing courses, which would introduce students to good practices in respect of finding and processing data.

The current system requires that students produce a large number of written essays, but it does not give them tools for doing so appropriately. This is a chief contributory factor in plagiarism.

Other contributory factors of plagiarism include the absence of licensed anti-plagiarism software at lecturers’ disposal, the excessive workload of students and lecturers, lecturers’ low salaries, and the weak academic
ethos in Belarus. To start seriously dealing with the problem, universities should first of all train students in critical thinking and academic writing. It is imperative to give students instruments with which they can complete written assignments. No other measures will work if this element is neglected.

The research paper proposes several initiatives on how to decrease the plagiarism level among Belarusian students,  however, the authors acknowledge that the use use of anti-plagiarism software remains far from being a panacea.

It is crucial to give students instruments with which they can undertake written assignments. No other measures will work if this element is neglected. The Belarusian students who plagiarise are not only “culprits”, but also “victims”: if they are not trained in academic writing or if it is at a low level, how can they succeed in doing written assignments on their own? As one of the interviewees aptly said, “It is necessary to distinguish between cynicism and the lack of knowledge. We must introduce the courses for lecturers on how to analyse a [student’s] text and detect plagiarism, and for students on how to write academic essays.” 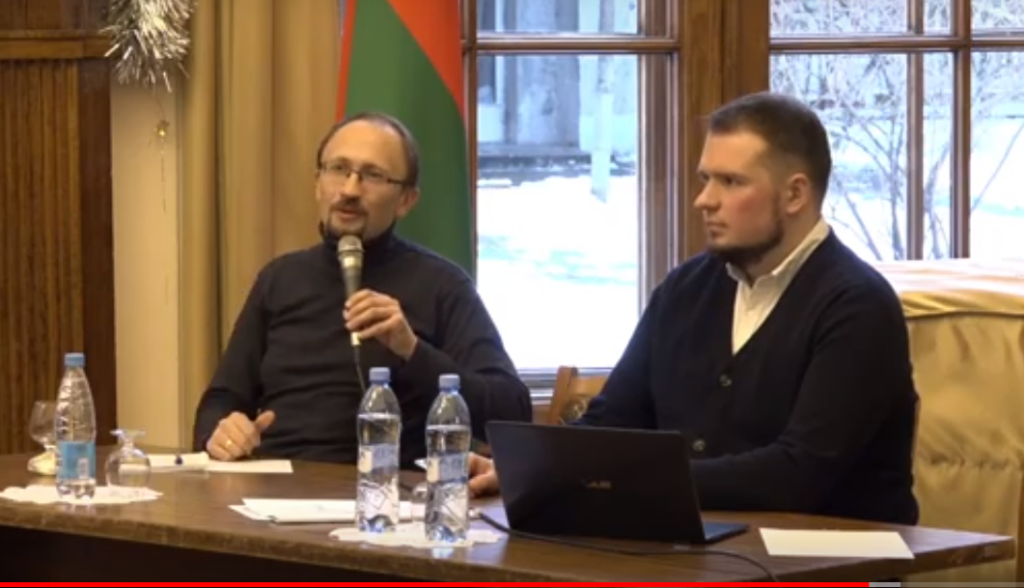 Piotr Rudkouski and Vadim Mojeiko at the Ostrogorski Centre’s conference on the reform of higher education.

The incentives can be both positive and negative. To quote one of the interviewees, “A system of selective post-checking [is needed]: premiums for lecturers should depend on whether they accepted plagiarised essays or not.”

However, one should remember that these checkers cannot substitute for the personal commitment of a lecturer. Software is not a panacea. To quote one of the interviewees, “Yes, we need anti-plagiarism checkers; up to half of all plagiarism can be detected in this way. But it can only serve as an element supplementary to human engagement.”

For lecturers to be able to combat plagiarism, it is necessary to ensure enough time and appropriate conditions for doing so. When it comes to students, it is advisable to reduce the volume of classroom tutorials to allow more time for students to work on their own. To quote one of the interviewees, “Students are overloaded with classroom hours, they have no time to prepare written assignments.”

If young people get accustomed to plagiarising in secondary schools, it is extremely hard to eradicate this habit later. “Plagiarism originates in [secondary] school. We should check essays and presentations [in schools] more strictly.”

“The most important thing is that it is motivated students, and not just school leavers, who should be accepted in universities,” as one of the interviewees noticed.

It is important to combat plagiarism, but it should be done gradually and prudently. To quote another of the interviewees, “It is necessary to think about the consequences of any harsh measures.” The antidote should not be more poisonous than the poison.