Belarus and Azerbaijan: Similar Regimes but Different Treatment by the EU

On 20-21 November, Alexander Lukashenka visited Baku. He held talks with Azerbaijan state leader Ilham Aliyev and they opened the new building of the Belarusian Embassy in Baku. This building became a good sign of the quickly developing relations... 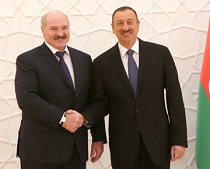 On 20-21 November, Alexander Lukashenka visited Baku. He held talks with Azerbaijan state leader Ilham Aliyev and they opened the new building of the Belarusian Embassy in Baku. This building became a good sign of the quickly developing relations between the two countries.

Trade between the countries is swelling, partly because of Belarusian weapon exports to Azerbaijan, which irritates both Russia and Armenia. Aliyev is also trying to help Lukashenka with his dealings with Russia and the EU.

Aliyev’s record of human rights violations appears worse than Lukashenka’s. However, this does not prevent the West from maintaining good relations with the authorities of Azerbaijan, unlike those with Belarus. Belarus has no oil or gas, so its authorities are faced with a much tougher choice—either become Russia’s vassal or democratise.

Topics for a Private Conversation

On 21 November, Alexander Lukashenka held one-on-one talks with llham Aliyev. Few people know what the leaders of Belarus and Azerbaijan were talking privately about, but they certainly had more than enough topics to discuss.

Belarus sells large quantities of weapons to Azerbaijan is helping it to modernise its air defence. The Azeris remain important customers of the Belarusian defence industry. Minsk, for its part, continues to tighten its economic relations with Baku. From 2006 to 2012 mutual trade increased six-fold, reaching $223.3 million, with Belarusians assemble tractors, trucks, and buses in Azerbaijan. Because of the continuous deterioration of the Belarusian economy, even small contracts mean a lot.

Also, the parties could discuss the future of the Eastern Partnership summit. Both countries show little interest in the EU program. However, the West is much more pragmatic in its relations with Azerbaijan. The European Union invited Aliyev to the summit in Vilnius and the Parliament of Azerbaijan participates in the Euronest, the parliamentary component of the Eastern Partnership.

Azerbaijan, like other EU Eastern Partners, supports the Belarusian Parliament to become a normal member in Euronest. It also helped Belarus in conflicts with Russia. In the summer of 2011, Azerbaijan in one day made a decision to give Belarus a $300-million loan to pay debts to Russia. In that period Azerbaijan also supplied oil to Belarus, having received oil from Venezuela through swap schemes.

Do Their Regimes Differ?

Lukashenka and Aliyev need each other. Although Belarus remains officially neutral in the conflict over Nagorno-Karabakh, the Belarusian weapon supplies to Azerbaijan weaken the position of Armenia. Armenia, like Belarus, belongs to the Collective Security Treaty Organisation and considers joining the Customs Union of Belarus, Russia and Kazakhstan. The Belarus-Azerbaijan deals​ also irritate Moscow, which has a rather cold relationship with Baku.

Moreover, both authoritarian regimes profit from each other's existence. For the authorities of Azerbaijan, it is convenient that Western public opinion remains focused on human rights violations in Belarus and Lukashenka`s policy, not Aliyev`s. Different Western approaches towards Belarus and Azerbaijan confirm the existence of double standards. That gives Lukashenka`s regime a right to seek from the EU the same attitude towards it as EU has to Azerbaijani authorities, whose human rights record remains worse.

The elites of Belarus and Azerbaijan both govern with little respect of the rule of law. In both countries, parliaments and courts are not free and elections remain non-transparent. In the world rankings these countries often find themselves in close proximity. In the Democracy Index created by the Economist Intelligence Unit, Azerbaijan held the 139th position and Belarus 141st. In the World Press Freedom Index of Reporters without Borders Belarus occupies 157th position, while Azerbaijan sits at 156th.

Lukashenka at least once, in 1994, won the democratic elections. Ilham Aliyev in fact inherited the presidency from his father. During preparations for Eurovision Song Contest Azerbaijani authorities evicted hundreds of residents from their homes and destroyed buildings to build Crystal Hallemerged, a place for the contest.

The EU approaches towards Belarus and Azerbaijan remain completely different. The EU does not impose visa restrictions on the Azerbaijani leadership, it has not introduced targeted economic sanctions. EU top officials regularly meet with Aliyev. Moreover, during his visit to Azerbaijan, the President of the European Commission Emmanuel Barroso did not meet with representatives of the opposition, and Polish President Bronislaw Komorowski did not even ask Aliyev about any human rights violations.
Will Aliyev Help Lukashenka?

Belarus-Azerbaijan relations remain important to the Belarusian authorities. Lukashenka and Aliyev meet almost every year, as well as other top officials from both countries who visit Minsk and Baku regularly. These meetings, in contrast to Lukashenka's visits to Myanmar and Singapore, do result in much needed contacts.

During Aliyev's most recent visit to the Minsk Automobile Plant (MAZ) and Amkodor, the manufacturer of a special type of machinery, the two sides signed new sale agreements with Azerbaijani companies. Lukashenka also invited Azerbaijani investors to take part in the privatisation of Belarusian enterprises.

Lukashenka and Aliyev remain reluctant to lead their countries either east or west. Both feel comfortable as rulers of their own states. Unlike Azerbaijan, Belarus has no oil and gas, on which the West is dependent. Lukashenka remains in a more vulnerable position and is forced to make a choice of either gradually becoming a vassal of Russia or democratising Belarus.

The resource-rich Azerbaijani authorities do not face a similar dilemma. Their support of the official Belarusian Parliament in Euronest shows that they wish to help Lukashenka break his regime's isolation. However, the European Union invested too much effort in the confrontation against Lukashenka, which makes it very difficult to fully recognise the authoritarian Belarusian regime.

How the Belarusian Political System Works 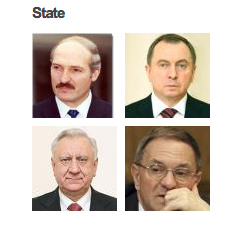 However, not many people in the West know what the Belarusian political system looks like under the Constitution. This article intends to fill that gap.

State of the Super President

Alexander Lukashenka was not joking in 1995, when during an interview to Handlesblatt magazine he praised the concentrated official powers of Hitler. One year later, a rigged referendum made him something akin to a super President.

Since 2004, the President has had the right to run for office an unlimited number of times. The term of office is 5 years. According to the Constitution, the President of Belarus not only has very broad executive powers, but legislative ones as well.

Lukashenka has the right to issue decrees that automatically assume the power of being law and override existing laws. Contrary to the Constitution, the President has significant competencies in the judicial field: he has the power to exempt individuals from criminal culpability for some crimes and can even pardon people for economic crimes.

The President also chairs the Security Council, which is probably the most important institution in the Belarusian political system. This body brings together the country’s top leaders and the main security agencies. Lukashenka keeps security officials in very close, as he does not trust them.

The top security staff basically unchanged over the past 19 years, with Lukashenka occasionally shuffling the same deck of cards in the nation's law enforcement agencies. It should also be noted that his oldest son – Viktar Lukashenka – is a member of the Council.

Belarusian political scientist Uladzimir Rouda describes the value in terms of the government being an economic and administrative agency that subordinate to the Head of State.

The President appoints and dismisses the prime minister and all other ministers. He also often leads the Council of Ministers' meetings which usually devolve into public humiliation sessions – or "a beating of the boys" – i.e. the ministers.

The government itself remains little more than a functionary, destined to execute the decisions of the President and his administration. Ministers in Belarus are not prone to quick turn over, yet despite the apparent job security afforded them, as a former employee of the Lukashenka`s team Siarhei Chaly said, "no one wants to be a minister."

Belarusian parliament has two chambers: the House of Representatives (lower chamber) and the Council of the Republic (higher chamber).

110 deputies elected in direct elections constitute the House of Representatives. 64 deputies constitute the Council of the Republic. Members of local councils from each region and Minsk elect eight members. Lukashenka appoints another eight personally.

The Parliament plays a very insignificant role. It has no real executive functions and the main task of the Parliament is basically rubber stamping laws whose content has already been drafted and finalised before it reaches them. According to Andrej Jahorau, over the course of its last four-year term, the Parliament has independently drafted only one law.

The House of Representatives or Council of the Republic do not hold any debates and MPs often just pass a given law unanimously. The Chamber Speakers or Chairmen of the parliamentary committees play a marginal role in Belarusian politics. Even Parliament property is managed by the Office of Presidential Affairs.

The judicial branch, as well as the legislative, remains almost entirely dependent. The executive branch organises the courts, appoints its judges and even determines the size of the bonuses that Court officials receive. The Constitutional Court is composed of 12 members, the President and the Council of the Republic appoint six judges each.

Although Belarusian traditions of local self-government have roots stretching back to the 14th century, these days Belarusians do not even have the possiblity of electing their own mayors. The President himself appoints the heads of local executive bodies, so they remain primarily loyal to him, and not to its local citizens.

Belarusians call this system the "executive vertical". The President can dismiss ordinary officials of the local executive committees and even revoke their decisions.

The local councils are made up of 21,288 deputies, but their official competencies remain pitifully narrow. Only a few members from opposition political parties made it through the sieve of fraud at the local elections in 2010. In 2014 Belarus will hold new elections to its local councils with what would appear to be rather predictable results.

Belarus remains a country with super-presidential system. Lukashenka controls the executive and legislative branches of government. The President also significantly influences the judicial branch, despite the fact that this is a clear violation of the fundamental Law of the country.

The Council of Ministers is doing little else but working to make sure Lukashenka`s policy objectives are met. Parliament is a body is a rubber stamp institution that is charged with approving legislation created by the Presidential Administration. Local executive bodies, as well as the Council of Ministers, implement Lukashenka`s policies, but only at the lowest level.

It is inconceivable that the judicial system will confront the President, as it remains almost entirely dependent on him.

The rigged referendums in 1995, 1996 and 2004 brought great changes to the Constitution and gave the President unlimited powers. Thus, Lukashenka's dictatorship has roots not only in his political practises, but also in the fundamental laws of Belarus.