Belarus became the primary beneficiary of the food embargo, which Russia imposed against Western nations in August 2014. In January – May 2015, Belarus supplied 916.4 thousand tons of embargoed products to Russia, a 53.5% increase over the same... 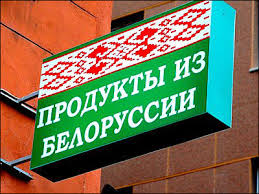 "Products from Belarus", a sign on a Russian shop

Belarus became the primary beneficiary of the food embargo, which Russia imposed against Western nations in August 2014. In January – May 2015, Belarus supplied 916.4 thousand tons of embargoed products to Russia, a 53.5% increase over the same period in 2014.

Two weeks after Russia introduced its food embargo, Howard Solomon, the minister counsellor at the US Embassy in Moscow, tweeted: "Last night, I tasted the Belarusian salmon. It reminds me of the one from Norway, but more expensive. I'll taste the Belarusian parmesan next."

What really stands behind this Belarusian commercial success: the hard work of domestic producers or the inventiveness of local smugglers?

Belarusian farmers, entrepreneurs and officials moved fast to take advantage of this windfall. The next day after the introduction of the embargo, Leanid Marynich, the Belarusian first deputy minister of agriculture, assured Russia of Belarus' willingness to "substitute Western countries for many food positions" calling this lucrative opportunity a "Klondike".

Immediately, several European companies wanted to invest in transforming agricultural products in Belarus. Officials from Latvia, Lithuania and Poland – Belarus' EU neighbours who are affected by the embargo – came to Minsk to discuss the opportunities for joint processing and exporting of dairy products.

In August 2015, President Lukashenka gave his blessing to this cooperation in his very direct style: "We must stir and seize the moment to make money… We have not made any commitments [towards the Russians] about our domestic market. We can import products from around the world. We must load, process and sell [them]. "

However, these ambitious projects turned out to be difficult to implement, at least in a legitimate and transparent manner that the officials promised. The production capacity of meat processing and dairy plants quickly became saturated. In addition, any radical increase in the export of food products might cause a deficit in the domestic market.

Lukashenka had to recognise the complexity of the situation at a government meeting at the end of 2014: "Even if we wanted to, we cannot import more meat and milk today for the transformation that we brought from the West [before], because we do not have any spare capacity."

However, these difficulties never stopped Belarusian entrepreneurs. Many of them engaged in outright smuggling trying to bypass sanctions on a scale, which can hardly exist without the tacit consent of top-ranking officials. The open border between Belarus and Russia has definitely facilitated these projects.

A week after the introduction of the embargo, the Russian Federal Service for Veterinary and Phytosanitary Surveillance (Rosselkhoznadzor) reported the first attempt to bypass the embargo from the territory of Belarus. Russian inspectors stopped a lorry with 19 tons of Ecuadoran peaches and nectarines accompanied by forged phytosanitary certificates issued in Belarus.

Initially, Rosselkhoznadzor tried to solve the problems of smuggling "in family", without much publicity. However, the negotiations failed and by the end of September 2014 the patience of the Russians ran out. Rosselkhoznadzor began reporting on the attempts of Belarusian businesses to circumvent the embargo on an almost daily basis.

The web site of Rosselkhoznadzor has been running what resembles a battle-field situation reporting about attempts to import products "of unknown origin" without certificates or food coming from embargoed countries and accompanied by Belarusian certificates. Thirty tonnes of potatoes, twenty tonnes of tomatoes, forty tonnes of pork, eighteen tonnes of grapefruits, two tonnes of beef … However, the true scale of contraband certainly exceed these figures, given the extent of corruption in Russia.

This brief trade war ended in December 2014 when Russia gradually recalled its import ban. Nevertheless, resourceful Belarusian entrepreneurs have not abandoned their efforts to supply the neighbouring country with European products re-labelled "Made in Belarus". In January – March 2015, Rosselkhoznadzor identified nearly 200 falsified phytosanitary certificates, which accompanied imports from Belarus.

Belarusian attempts to substitute the Western food imports to Russia have brought uneven results. While for some positions there has been a spectacular increase in supplies, the most ambitious plans have failed to come true.

In September 2014, an official of the Belarusian Ministry of Economy announced the country' intention to increase its food exports to Russia by $300m in 2014. In fact, the Belarusian supplies of food products to Russia increased only by 0.9%, which represented a growth of about $42m.

In January – April 2015, according to Russian statistics, Belarus increased its share in Russia's imports of fresh and chilled beef from 76% to 90% compared to the same period of the previous year and cheese from 26% to 76%. However, in tonnes and dollars these exports grew very modestly. Belarus was more successful in its exports of apples, milk, cream, dried and salted fish to Russia.

Last year, Belarus bought an additional 208 tonnes of apples from the EU and Moldova. Again, most of the fruit the country most likely re-exported to Russia, as its export to this country grew by 198 tonnes representing a 142% increase.

Alongside with the direct re-packing and re-labelling, other transformations also took place. In 2014, Belarus increased its imports of fresh fish by 7.1 tonnes, mostly from Norway. The bulk of this surplus underwent transformation in Belarusian plants and went to Russia, as Belarusian exports of dried, salted and smoked fish grew by 6.2 tonnes.

On 5 August, the Belarusian minister in charge agriculture and food Leanid Zajac claimed that the Russian decision to destroy confiscated Western products never affected Belarus and refuted all accusations of possible contraband. "We will ensure that our products continue to enter the Russian market without any interruption and that there would be not one iota of doubt in our products' country of origin and quality", he said.

The Belarusian success story in becoming the primary beneficiary of the Russian food embargo has been a complex mixture of hard work, honest entrepreneurship and cunning scheming. But even with this combination Belarus gained less from the Russian embargo that it had initially hoped.

The Myth of Thriving Belarusian Agriculture 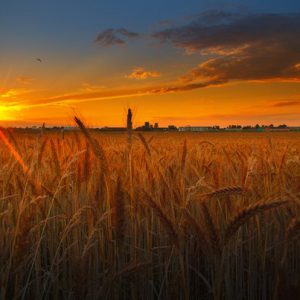 Agriculture was the fastest growing branch of the Belarusian economy in the first half of 2015. Many in Russia and other post-Soviet countries consider Belarus to be a model when it comes to maintaining a viable agricultural sector.

But in reality, the Belarusian government spends more on agriculture than the sector’s value added. Despite substantial subsidies many Belarusian foodstuffs cost more than European equivalents, including Polish cheese, Dutch meat, and Spanish tomatoes.

Agriculture plays a significant role in Belarusian state ideology. Almost every television news report in Belarus contains at least one reference to the agriculture sector, such as the recent story on Lukashenka teaching French actor Gerard Depardieu how to mow with a scythe.

In fact, however, Belarusian agriculture is the least effective sector of the economy. It still resembles the USSR era. Soviet-style collective farms still dominate the market and can barely operate without state subsidies.

The share of agriculture, hunting, and forestry in the economy has been diminishing over the last 25 years – from 23 per cent of GDP in 1990 to 7 per cent in 2013, according to the National Statistical Committee. With over 320,000 Belarusians employed in the sector last year, agriculture still accounts for quite a significant part of the economy. By contrast, in Poland the share of the agriculture sector is twice as small.

Salaries in agriculture remain among the lowest in the country, and hence the sector suffers from severe labour shortages. Currently, agriculture sector wages are a third of the average national salary (around $300 per month). However, earnings in this sector rose faster than the average in 2011-2013.

Agriculture remains the least transformed sector of the Belarusian economy. Private farmers, the basis of agriculture in any market-oriented economy, contribute less than two per cent to the total agricultural output. Together with production from household plots, i.e. individual gardening for one's own needs, they constitute less than a quarter of the total agricultural output. Yet state-owned collective organizations or collective organisations with significant state involvement make up the vast majority of the rest.

Agriculture has become a very export-oriented branch of the Belarusian economy, with a positive trade balance. In 2014 it accounted for $5.6bn or 15.5 per cent of total exports. The only problem is that virtually all these exports, particularly dairy and meat products, go to Russia. 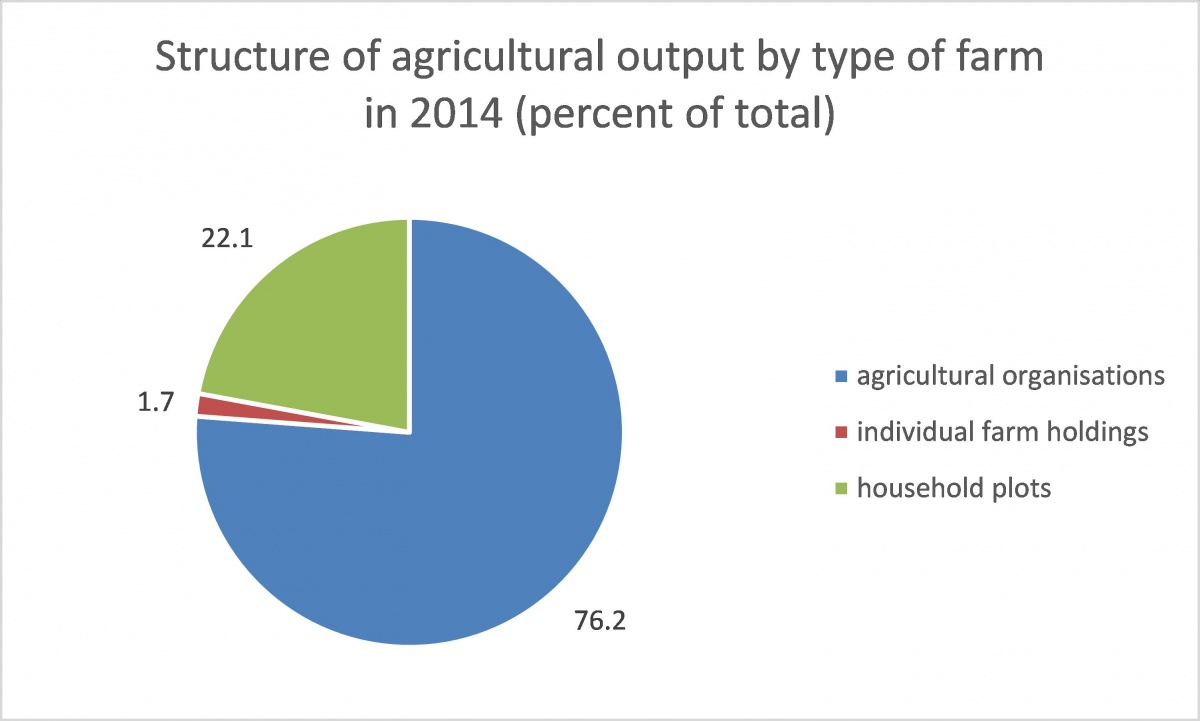 Almost all state-owned collective farms would immediately go bankrupt without state support. Only 10 per cent of agricultural firms could operate profitably without public aid, according to a study published in December 2013 by the Ministry of Economy. The absence of reforms turned agriculture into a very ineffective sector of the economy.

Paradoxically, the Belarusian government uses more resources on agriculture than it produces. In recent years subsidies for the agriculture sector oscillated between 9 and 12 per cent of GDP, according to the Ministry of Agriculture. At the same time agriculture’s contribution to GDP is less than 9 per cent.

On the other hand, with hardly any financial aid from the state private farmers have proved themselves to be more productive than generously subsidised state-owned entities. Over the last 15 years private farmers have increased production by 16 per cent annually, i.e. 10 percentage points faster than the state-owned collective farms. This financial performance also boosts arguments in favour of private ownership.

Occasionally Belarusian officials discuss privatisation of agricultural enterprises. In November 2014, Deputy Prime Minister Michal Rusy stated that nearly 30 per cent of agricultural enterprises were insolvent and said that perhaps it was time to sell them. In mid-July this year the head of Hrodna region, Uladzimir Kraucou, confessed that a third of the 150 agricultural organisations in the region cannot pay off their debts. The local authorities have considered their privatisation or at least reorganisation and have even received business proposals from investors to this end.

Commitments To Decrease Financing For Agriculture​

If Belarus were to join the WTO, it would have to cut significantly its financial support to agriculture. Without the prior liberalisation and privatisation of the agricultural sector, this will cause the whole sector to collapse. On the other hand, Belarus has already begun decreasing financing for the sector, and in 2016 subsidies should not exceed 10 per cent of GDP, due to Belarus’ commitment to the Eurasian Economic Union.

Improvement of the business environment can be a successful substitute for the huge financial injections into agriculture. Making it easier to do business and providing equal treatment for all business entities may encourage Belarusian private and foreign capital to replace the ineffective companies or force them to become more effective.

For instance, during the last economic liberalisation in 2007-2010 one of the world's biggest brewing companies, Heineken, entered the Belarusian market. The company has taken a large chunk of the brewing industry, and by doing so has invested in cooperation with many Belarusian agricultural enterprises.​

Private Farming Remains The Only Solution

Lukashenka’s policies have hindered the development of the private sector, particularly in agriculture. For instance, Belarus now has around 20 per cent fewer individual farmers compared to 1994 when Lukashenka was first elected as president. Officials have been discriminating against private farmers, sending inspections to their premises more frequently and subsidising predominantly the state-owned collective organisations.

For the last 25 years the authorities have tried to avoid reforming the sector. The absence of private ownership of land remains the real obstacle for the sector’s growth. The agricultural land market hardly exists. Less than one per cent of Belarus’ land areas is under the private ownership of natural persons who are citizens of Belarus. The experience of other post-socialist countries, both in Eastern Europe and in East Asia, shows that the transfer of land ownership boosts the profitability of agricultural activities.

The ability of the Belarusian authorities to maintain a viable agricultural sector remains only a myth propagated in Russia and some other countries. In fact, Belarusian agriculture survives only thanks to gigantic state subsidies. Instead of supporting the systematically unprofitable entities, the government should distribute the financial resources more equally, creating an equal market environment for both collective organisations and private farmers.