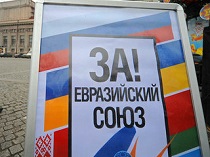 While Russia tries to create something resembling for the external audience the European Union and for the internal audience Soviet Union, Belarus has failed to gain additional benefits from the project. Reduction of a large number of trade tariff exemptions has been slow and Belarus’ trade within members of the EEU fell by a third.

On 24 November, the Russian newspaper Kommersant wrote that the Eurasian Economic Union may soon abolish duty-free export of cars produced on the territory of the EEU. This will hit Belarus the most and may undermine the whole idea of the existing assembly lines of Geely, Peugeot and Citroen cars in the country.

The first year of the Eurasian Economic Union showed that Russia wanted to make the project look like the European Union. Armenia and Kyrgyzstan became members alongside Belarus, Kazakhstan and Russia. The EEU has signed a mutual free trade agreement with Vietanam, and according to Putin’s article published on 17 November on the web site of Chinese news agency Xinhua, currently about 40 countries are considering having an FTA with the Eurasian Economic Union.

Some ideas look EU-inspired, such as the desire to abolish roaming within the EEU and working on a common identity. At the beginning of the year, the Speaker of the Higher Chamber of Russia’s Parliament, Valentina Matvienko highlighted the need to "strengthen information work to grip the masses with Eurasian ideas."

But it seems that only Russia thinks about the Union in this way. Belarus looks at it differently.

So Little of the Economy and So Much of Politics 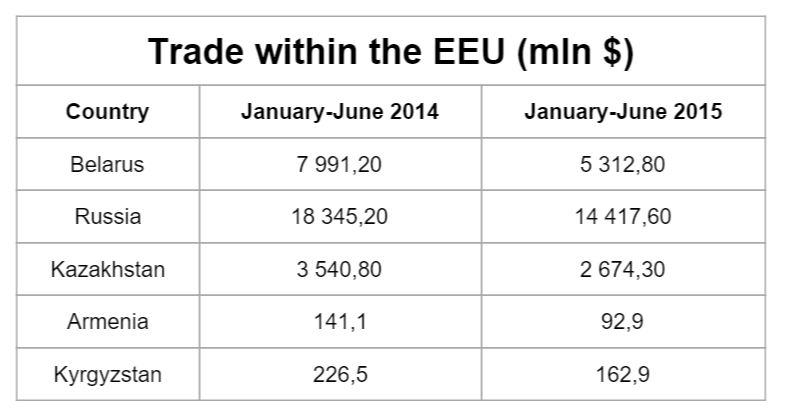 The year 2015 failed to bring trade liberalisation. This may sound weird for Belarus, as the country usually sticks to protectionist policies, but Belarus actively promotes the removal of restrictions on trade between EEU member countries.

Belarus tries to reach out to important markets such as gas and oil. However Russia plans to liberalise them at last, but only in 2025. This will allow other countries' companies to buy Russian resources under the same conditions as Russian companies.

During 2015, it seems all Belarusian top officials advocated the reduction of restrictions. On 12 July, Uladzimir Makei, the Minister for Foreign Affairs, complained that "the EEU should not be a toy" hinting that the Kremlin sees the union this way. According to Andrei Kabiakou, the Prime Minister of Belarus, the list of exemptions in mutual trade began to increase in February 2015.

The greatest problem of the Eurasian Economic Union has little to do with the economy, at least in terms of what people usually understand as the economy. Trade wars, despite previous agreements, have continued. The Eurasian Economic Union began its life against the background of the Belarus-Russia food war. Throughout the year, the conflict flared up when Russia accused Belarus of re-exporting Western products. Therefore Russia banned the import of goods and reinstalled customs checks at the Belarusian-Russian border.

Continued trade wars indicate that the Kremlin perceives the EEU as a political project. Moreover, now almost every issue has become politicised.

On 24 November, the Russian newspaper Kommersant published an article according to which Kazakhstan and Russia propose to remove preferences for foreign car manufacturers who assemble cars in the Eurasian Economic Union. If that happens, foreign companies could stop the assembly of Geely, Peugeot and Citroen in Belarus. This summer Belarus signed a contract with General Motors, which could also be reviewed if the EEU cancels the free zone benefits.

In December, the heads of the Eurasian Economic Union may make a decision on removing the trade preferences. It seems that all countries except Belarus support this move.

The Two Inertias of Eurasian Integration

Despite the fact that Belarus in many respects appears no closer to the other countries of the EEU this year, the Eurasian Economic Commission, the technical body of the Union, made a few steps forward in integration. In September, the Commission announced that it had adopted a number of agreements on the energy, agricultural and infrastructure sectors. The next year the liberalisation of the drug market should occur, and in 2017 there will be a common foreign exchange market.

However, political inertia remains dominant, which causes disintegration. Russia perceives the EEU as a political project promoting their own hegemony. Therefore many other countries fear Eurasian integration.

Moreover, some countries remain reluctant to see the Eurasian Economic Union as only an integration project in itself. On 24 November, Kazakhstan completed the ratification of documents related to accession to the World Trade Organisation. A significant portion of tariffs agreed between Kazakhstan and the WTO appeared lower than those adopted in the EEU.

Moreover, the economic decline, particularly in Russia, undermines incentives of countries to integrate further. Under such conditions the first year of Belarus membership in the Eurasian Economic Union has shown rather poor results. Eurasian integration remains more about hype than substance. 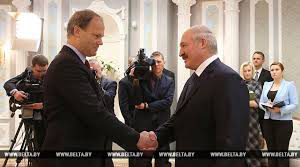 Belarus's economy continues to shrink, and the government tries to sell proposed reforms for financial support from international organisations. Meanwhile, the IMF notices "considerable progress" in discussing reforms and the World Bank puts forward its vision of the reforms that are necessary to restore growth in Belarus.

Belarus continues to boost its military potential by modernising old weapons while acquiring new ones, but its strategy will remain exclusively defensive. Minsk celebrates the anniversary of the 1917 Bolshevik revolution and commemorates Czech Jews killed by the Nazis in 1945. All of this and more in the new edition of the Western Press Digest.

Russia’s financial crisis has started to impact Belarus’ economic growth. According to the Financial Times, due to falling level of Russian imports, Belarus’ GDP will most likely shrink to 4% in 2015. Additionally, the Belarusian ruble has decreased by nearly 50% in dollar terms. Any remaining foreign investment has nearly evaporated as a result of the economic downturn. Aliaksandr Čubryk, Director of the IPM Research Centre, remarked that, “the story of this economy is the story of inefficient state-owned enterprises.”

The Finance Ministry and the Central Bank are working with international financial institutions to roll out reforms with the hope of securing financial support from the International Monetary Fund. On 9 November an IMF delegation visited Belarus to discuss a new facility that has an estimated worth of between $2 and $3 billion dollars. The government, in addition, wishes to distribute a Eurobond next year worth €1 billion.

The International Monetary Fund released a statement on the current mission in Belarus – On 20 November the IMF visited Minsk. The purpose of the mission, led by Peter Dohlman, was to evaluate recent economic developments and to begin discussing a new economic program that would potentially receive financial assistance from the IMF. Mr. Dohlman observed that, “the staff team and the Belarusian authorities made considerable progress in discussing a set of policies which could be supported by a three-year Extended Fund Facility (EFF) arrangement.”

World Bank discusses restoring economic growth in Belarus through sequenced reforms – Belarus’ economy, according to the World Bank, requires institutional changes that assist in fostering enterprise performance, innovation, and the diversification and establishment of new markets for Belarusian products. Such reforms include managerial incentives, job skills development and overall improvement in Belarus’ business climate. Weak foreign and domestic demand will cause the economy to contract by 3.5% in 2015 and by 0.5% in 2016.

Mr. Young Chul Kim, the World Bank’s country manager for Belarus, stated that, “The purpose of a comprehensive reform is to remove structural constraints which have prevented the Belarusian economy from realising its maximum potential.” In addition to sequenced reforms, potential membership accession into the World Trade Organisation (WTO) could help stimulate substantial income growth.

Fitch rating for the Belarusian National Reinsurance Organisation (Belarus Re) Insurer Financial Strength (IFS) received a B minus – Belarus Re functions as the national monopoly reinsurer. This monopoly has grown to 100% in 2014 from 10% in 2006. The rating received is a reflection of 100% state ownership of Belarus Re. Although there is no direct agreement between the company and the government, various capital injections at its inception have occurred over the recent years.

In Fitch’s view Belarus Re’s investment portfolio is of lower quality due to the constraints of sovereign risk, the presence of issuer concentration and the quality of local investment instruments. Belarus Re’s has limited options to diversify due to a limited investment market and strict insurer’s investment policy regulation.

Belarus military strategy is exclusively defensive – Polish Rzeczpospolita quotes Lukashenka, as he visited the military industry plant in Dziaržynsk district. Belarus will cause unrecoverable loss to those who dare to attack it, and the development of rocket forces is a major goal in this strategy, Lukashenka said. Belarus has been boosting its military potential in recent months, receiving four Jak-130 jets. By 2020 it will have replaced its MiG-29 with Su-30SM jets and have purchased new Jak-152 training planes from Russia. Also, Belarus will receive four surface-to-air missile systems, the S-300, and it is currently in negotiations with Russia to acquire the more modern S-400 systems.

In 2015 Belarus strongman Lukashenka repeatedly said that his country will not give any land to an aggressor. According to him, Belarus became one of the most militarily powerful counties in Eastern Europe after the considerable modernisation of existing forces and the development of its own weapons.

Unveiling of a memorial for Czech Jews killed in Belarus – Radio Free Europe/Radio Liberty covered the ceremonial unveiling of a memorial for 6,000 Czech Jews who were deported from Czechoslovakia and then killed in Minsk in 1945. The ceremony was held on 23 November on the 70th anniversary of the first groups deportation from Czechoslovakia to Belarus. The Minsk Educational Centre of Johannes Rau established the memorial. Milan Ekert, the Czech Ambassador to Belarus, was in attendance.