On 9 - 12 October, Belarus Digest provided live online coverage of the presidential elections in Belarus and international and domestic reactions to it.

Below, we feature a collection of stories from international and Belarusian media, videos, pictures, and comments... 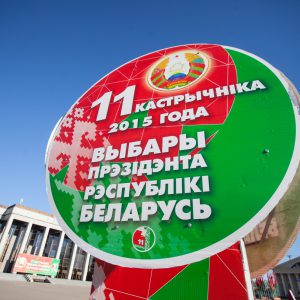 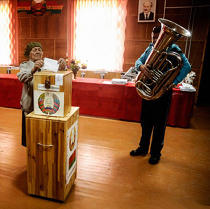 Realistically no one expects a fair vote count. The official results will be produced to bring victory to Alexander Lukashenka. But there are three things that can significantly change the perception of the campaign: access to the vote count, the number of votes against Lukashenka and the post-election period.

Transparency of the Vote-Count

These elections differ from the 2006 and 2010 presidential elections. Although the nature of the political regime remains the same: a small amount of opposition in election commissions, forcing students and civil servants to vote in advance or lack of system liberalisation, many minor improvements have actually taken place.

According to the Belarusian Association of Journalists, an independent influential NGO, state media have not shown the Belarusian opposition in an extremely negative light as they did before. Previously, it looked unbelievable that Belarus Today, the regime’s main propaganda newspaper, gave an opposition candidate an opportunity to speak without censorship. Tacciana Karatkevich, the only democratic candidate on the ballot, had an online conference at Belarus Today on 24 September.

In general, the authorities made ​​some concessions during the campaign. The most important was the release of political prisoners, but also the regime turned a blind eye to massive opposition rallies in Minsk city centre. The protest against the creation of a Russian airbase in Belarus, which took place on 4 October, gathered about 500 participants.

If before election day in 2006 hundreds of democratic activists ended up under arrest, this year the authorities have not arrested a single activist helping Karatkevich’s campaign.

But these changes will look cosmetic, if the authorities count votes as before. Usually in Belarus observers are not allowed to see the actual vote count (the author personally observed several elections in Belarus and will be an observer this year). This causes many to doubt that the vote-counting is fair. If the government continues as if it were business as usual, then these elections will fail to meet democratic standards.

But according to some sources the authorities plan to allow international observers to watch the counting of votes. If the OSCE mission sees the vote count at least in most places, it will be forced to admit gradual changes in Belarus. That will further improve Belarus’ relations with the West.

It seems that for many Belarusians the electoral campaign just started this week. A few major Belarusian independent web-sites confirmed to Belarus Digest that so far the overall traffic on their web sites has not grown. Several civil activists have criticised the opposition during the period for collecting signatures, stating that they have not seen a single picket of democratic candidates. When journalists ask ordinary people about the elections, many of them seem uninterested about the topic.

Despite the boring campaign, Belarusians could turn away from Alexander Lukashenka for a number of reasons. Belarus remains in the middle of the deepest economic crisis under Lukashenka’s rule. He seems reluctant even to lie about finding quick and easy solutions for the recession. Moreover, many Belarusians may be tired of the man who has ruled Belarus for over 20 years.

This leaves plenty of opportunities for Tacciana Karatkevich. According to sociological data of the Independent Institute of Socio-Economic and Political Studies, she had 17,9% support among Belarusians a month before the election and may gain 25% of votes on 11 October, if the ballots are actually counted.

Therefore, several things are worth watching. Firstly, how many votes the authorities will allocate to Karatkevich and other candidates,such as Siarhei Hajdukevich and Mikalai Ulakhovich, who are unpopular candidates promoted by the authorities. If their total percentage comes above 20%, this would indicate that the regime admits that it is losing popularity.

Only after the elections will it become clear to whether the campaign started a long-term trend of giving more space for the opposition or serves only the short-term benefits of the regime. The presidential campaign in 2010 also gave many reasons for optimism, but ended in the most massive repression in the history of Belarus with hundreds of people arrested, including several presidential candidates.

The authorities still can return to the usual routine, especially if Karatkevich receives many votes. Like in 2010, the authorities may get scared of the opposition’s success, so it further undermines the organisational potential of democratic forces in Belarus.

But if the authorities are wiser this time and refrain from cracking down on mass protests and using state media to slander the opposition, it will become a chance for Belarus to improve relations with the West in the long run. The opposition’s reluctance to hold mass protests after the elections makes the task easier for the Belarusian authorities.