Last Wednesday, Russia's ambassador to Minsk announced that Belarusian enterprises provide 15% of Russia's national defence purchases (oboronzakaz). This figure may grow —​ Moscow promised to transfer the orders it had with Ukrainian firms to Belarusians. 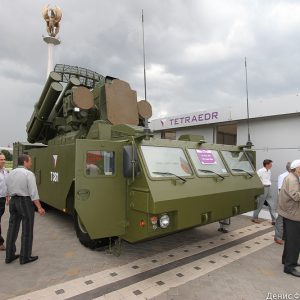 Last Wednesday, Russia's ambassador to Minsk announced that Belarusian enterprises provide 15% of Russia's national defence purchases (oboronzakaz). This figure may grow —​ Moscow promised to transfer the orders it had with Ukrainian firms to Belarusians.

Yet Russia is also demanding from Minsk that it sells Belarus's defence factories to it. Minsk is doing its best to resist: it develops new products, extends defence exports outside Russia and constantly seeks other partners in post-Soviet and developing countries. The Belarusian government is trying to attract Ukrainian specialists, expertise and technology which can help it in this undertaking.

The development of the national defence industry illustrates how the Belarusian government is seeking to maintain a balance between the huge sums of money coming in from Russia and the need to find alternative markets and opportunities.

Due to close military cooperation with Russia, Belarusian firms supply Russian products with these sophisticated and expensive kinds of equipment. It explains how Belarus managed to secure for itself such a large share of Russia's military purchases ($7-7.5bn). Belarusian enterprises also participate in Russian arms exports. Little information was published on it, yet out of $950m Russo-Indian tanks deal in late 2000s $90m went to Belarusian Beltekhekspart and Israelis which supplied electronics.

Problems have emerged in Russo-Belarusian ties as a result of another priority of the Belarusian defence industries: the overhaul and modernisation of aircraft, helicopters and armoured vehicles, air defence systems, radars, electronic intelligence and warfare. Even Russian military experts frequently admit: Belarusian firms do it cheaper, and better than their Russian counterparts.

As a result, Russian state corporations frequently make orders to Belarusian enterprises instead of giving them to their own underemployed plants and factories, as one anonymous expert from the Moscow-based Centre for Analysis of Strategies and Technologies close to the Russian military complains.

The Kremlin recently started to alter its cooperation with Belarusian defence industry by demanding that Minsk basically give them away to Russian owners working in the same field — owners who are interested in shutting down Belarus-based production lines in order to get rid of competitors.

In March 2013 Moscow forced Minsk into an agreement to sell controlling block of shares of the Minsk-based MZKT works which supplies Russian missile forces with chassis. So far Belarus managed to delay it knowing that if Russian KAMAZ buys the Minsk works it will not last for long.

Russia Is Not Helping With the Belarusian Arms Industry's Development

To survive in its unequal relationship with Russia, Belarus has to look for markets and opportunities outside of Russia.

Although Lukashenka said that national defence industry would create new product lines in cooperation with Russia, such as aircraft, Moscow's attitude towards Belarus's needs have more than once disappointed Minsk. Defence issues fit into this paradigm as well. Russia has avoided giving Belarus many newest weapons. Lukashenka himself recently complained that "the others, alas, not Russians, are helping us."

Undoubtedly, one of the these unspecified 'helpers' is Ukraine. Belarusian military industrial firms for years have cooperated with their Ukrainian counterparts. They successfully created new joint products such as anti-tank weapons and air defence systems sold mostly to post-Soviet Azerbaijan, Kazakhstan and Turkmenistan.

In cooperation with Motor Sich, the world-reknown Ukrainian manufacturer of aircraft and helicopter engines, Belarusians were able to establish a joint venture for the complete overhaul and future production of its Mil helicopters (first and foremost, the Mi-8 model) in Orsha.

Moscow does not like the Orsha project as it is in direct competition with Russian firms. In October, a Jane's Defence Industry publication even claimed that “Belarus threatens to terminate the Motor Sich share holding in Orsha aircraft plant.” This news, however, resembles a rumour disseminated to disrupt Belarus-Ukrainian relation.

Other reports following the October visit of Motor Sich delegation to Belarus spoke only of ordinary problems with delays in the implementation of previous agreements with the Ukrainian firm. Minsk obviously tried to put pressure on Motor Sich to proceed more quickly with its plans in Belarus.

In September, the Belarusian president demanded from the industry to create a closed cycle of production for some national defence products. To produce them without serious dependence on imports, Minsk can attract specialists, technologies and capital from the war-torn Eastern Ukraine.

In April, visiting the Baranavichy 558th Aviation Repairs Works, Lukashenka stated: "Let's try to make deals with the Ukrainians and work together so that Ukraine's intellectual and engineering centres and designers do not perish. Now is the right moment… we shall use this moment not only for ourselves but for external markets as well".

Meeting with the Motor Sich managers in October, he declared his willingness “to accept all Ukrainians who want to live and work in Belarus.” The Belarusian leader asked his Ukrainian visitors, “you should work with Russia through Belarus. I do not conceal it, it is the right way”. Given Russia's dependence on many Ukrainian components and even complete defence or dual use products (like aviation engines), Minsk has some good chances to make this a reality.

According to military expert Alyaksandr Alesin in late September, a delegation from the Belarusian military industrial complex headed to Ukrainian military enterprises. They paid particular interest in factories and design organisations in Kyiv, Lviv, Dnipropetrovsk and Chernyhiv which dealt with missiles and missile components (i.e. air defence, surface-to-surface and cruise missiles). Insiders from the Belarusian defence industry confirm that some Ukrainians already have arrived.

Ukrainians can offer significant help with air defence items which remain to this day the main speciality of Belarusian defence industry. Belarus currently modernises Soviet-era surface-to-air missile (SAM) systems and effectively develops new types of them for several post-Soviet and developing countries. Some of these products already involve no foreign cooperation and contain no foreign components with one very significant exception – missiles.

Until now, Belarus produced no lethal equipment. Recently, Belspetszneshtekhnika hinted at plans to produce missiles for SAM systems in Belarus. They will have to deal with any number of technical difficulties to realise their plans, however Alesin believes that the decision to launch missile production may have been taken at the highest levels of government some time ago. And it is precisely the Ukrainian experts who will be able to establish their production. The centre of Soviet missile development and production has always been in Eastern Ukraine.

The Belarusian defence industries emerged during the Soviet times as a part of a larger Soviet military industrial complex. They had few chances to survive on their own, yet they managed to find new markets and now may even find a means to expand. In its military industrial policies, Minsk is careful to not antagonise Moscow too much, yet it also defends its interests against the Kremlin's pressure (the Motor Sich project is a case in point).

Belarus is using its proximity to Russia to its advantage, while actively looking for other opportunities as well. In the period of October-December alone, Belarus has held talks on military technical cooperation with China, Vietnam, Turkmenistan, Angola and Pakistan. National defence industries can contribute to the consolidation of a viable independent state.

Discussion “What Do Belarusians Think: People’s Attitudes Towards Capital Punishment” 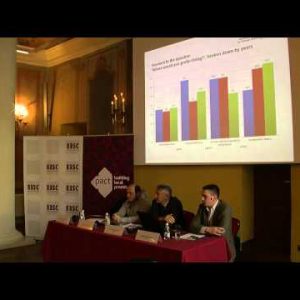 The discussion focused on the findings of the recently published opinion survey "Crime and Punishment: People's Perceptions, Assessments and Attitudes", conducted by the group of Satio companies along with the organisation Penal Reform International.

Since September 2014 the series of live discussions "What do Belarusians think?" is organised by the Office for European Expertise and Communications in partnership with the Belarus Research Council and international non-profit organisation Pact with the support of the United States Agency for International Development (USAID).

"We want to make expert debates public and create a space for the discussion of topical issues regarding the development of the Belarusian society", says Sviatlana Zinkevich, Director of the Office for European Expertise and Communications, commenting on the projects' objectives.