Belarus Will Start the New Year with a Wishful Budget

On 11 December, the Belarusian parliament took only 50 minutes to adopt its 2015 budget.

The rapid adoption of the budget highlights the parliament's puppet status - it could not even be troubled to hold even demonstrative discussions over the... 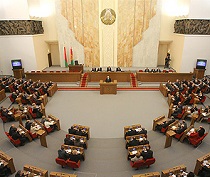 On 11 December, the Belarusian parliament took only 50 minutes to adopt its 2015 budget.

The rapid adoption of the budget highlights the parliament's puppet status – it could not even be troubled to hold even demonstrative discussions over the important document.

Although more than 80% of Belarusians believe that budget information should be easily accessible, even experts lack a means to analyse most of the revenues and expenses.

The adopted budget, interestingly, reveals the authorities's scepticism with regards to economic growth and it also revealed Lukashenka’s plan for election year – try to maintain the current GDP level and nothing more. Although the budget appears modest, some of items, like value of the Russian ruble or the price of a barrel of oil are extremely optimistic.

Absence of Public Debate on Budget

Unlike most European countries where it may take months to adopt a budget, the Belarusian parliament adopts it as quickly as possible. On 11 December, MPs passed the country's budget for 2015 in only 50 minutes. When the Finance Minister Uladzimir Amaryn presented the law in his 18-minute speech he also explained changes to the tax code, otherwise members would have adopted the budget even faster.

Several MPs made comments regarding the lack of money for social programmes. They also thanked their colleagues and called to take the law in the first reading, which took place shortly afterwards. In all, the House of Representatives adopted 13 bills that day.

The incredible speed of the legislators has roots in their weak position in the Belarusian political system. Few see the House of Representatives and the Federation Council, the upper and the lower chambers of Belarus's parliament, as serious political institutions. Most Belarusians do not even know a single member of parliament.

Belarus's parliament simply never holds debates over the budget because the budget itself is mainly developed in the presidential administration and the Council of Ministers, much more important institutions, where the discussion has an absolutely confidential nature. Thus, MPs simply approve whatever the others have previously approved.

According to the Independent Institute of Socio-Economic and Political Studies, almost 60% of Belarusians believe the information provided on how the state budget is formed is basically incomprehensible. It seems that many hesitate to admit the truth to the pollsters as much in the Belarusian budget remains obscure – even for experts. The authorities present the budget just before its adoption and there are no means by which to keep track of how the money is spent, and whether or not they indeed go to their announced priorities.

For example, next year's budget has set an increase in income tax from 12% to 13%, one percentage point, that officially will go to support large families. However, the IISEPS’s analyst Aliaksandr Sasnou​ told zautra.by web-site that the money may not actually be going anywhere: “What if he (Lukashenka) takes the money and sends it to strengthen his gendarmerie​? You can say anything you want, but no calculations have been submitted.”

Despite the fact that Belarus lacks any semblance of local self-governance, the local authorities still prepare their own budget, which only complicates matters further. The expenditures of the national and local budgets overlap, which makes them even more incomprehensible. The total sum of all budgets is called the consolidated budget. In 2015 the national budget expects to bring in $13.7bn pledged under the proposed ruble exchange rate in the budget in revenues. The consolidated budget for 2015 is $22.1 bn.

Uladzimir Kavalkin of the KoshtUrada.by, a web-site that tracks budget expenditures, told Belarus Digest that it is important not to forget about state extra-budgetary funds. The authorities create them out of the national budget and they are also non-transparent.

The Budget is Modest and Retains Little Growth…

On 11 December, Alexander Lukashenka told Prime Minister Mikhail Myasnikovich that "the set plans for next year's economic growth is the minimum and Belarus is eager for more”. Indeed, the budget has GDP growth at only 0.5%, with a 3.6% decline in exports and sets inflation at 12% – all while increasing taxes. Although the budget has a surplus of $4 billion, this money will be spent on paying off foreign debt.

The budget reflects Aleksandr Lukashenka's plans for the upcoming elections that will likely take place in November 2015. The authorities are being very careful with their economic policy in order to avoid a crisis. The only thing that the authorities plan to assign more money to is a 50% increase for social welfare, although this is an unusually small gift for an election year in Belarus. All other expenditure categories have only small increases this year. Even defence institutions, on the eve of a possible full scale war in Ukraine, have not received additional funds.

… But Even This Budget Remains Wishful Thinking

It is unlikely that the authorities will be able to achieve all they have set out to do, so they will likely need to amend the budget throughout next year. This is due to the fact that the budget already has a few areas that appear to be overly optimistic. For example, the budget has the exchange rate of the Russian ruble at RUB 43/$1 (at the time of publication $1 in Russia was worth 55 rubles) or the price of Urals oil at $83/barrel (at the time of publication a barrel of Urals cost $56).

The price of the US dollar in Belarus, with a 30% currency trading fee, is around BYR 14,500 while it should be around 11,400 next year according to the adopted budget. When one of the MPs asked the Minister of Finance whether these figures appeared realistic to him, Uladzimir Amaryn answered that "Russia has even more optimistic figures".

Even with these wishful figures, the budget of Belarus lays out a very tough year ahead. One of the deputies before the adoption of the budget said that " Belarusians could see up to a 1.5% increase in their incomes." This is likely an unrealistic estimate, as just avoiding a recession is what Belarus should really be thinking about. 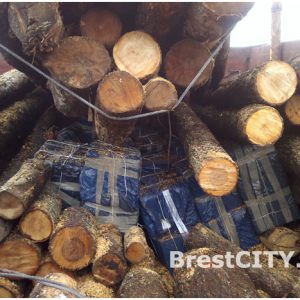 Since 2014 the pattern of illegal exports from Belarus to EU has moved towards larger consignments. Large quantities of detained tobacco found on cargo trains. On 6 November Jury Siańko became the Head of the State Customs Committee. Will he change the current situation with smuggling from Belarus to EU?

The decrease in individual border traffic and the growing share of Belarusians cigarettes in the EU shadow market are both reasons for concern. Financed by the EU and foreign tobacco producers, Belarusian State Customs Committee aims to reduce smuggling and increase revenue for the state.

A new appointment in the Belarusian bureaucratic system removed Aliaksandr Špilieŭski​ from the State Customs Committee with a young Jury Siańko. The new head of customs started a campaign for electronic registration at border crossings which is set to start on 1 December in Kazlovichy.

The new campaign can reduce queues at border crossings and generate profits from the registration fee and increase international traffic. But what is the aim of such campaign without new anti-smuggling activities: to increase customs revenues or to reduce the volume of contraband?

Larger tobacco consignments and the growth of detained cigarettes show a new pattern of smuggling to the EU. 11 September Siarhei​ Prudnichenka from the Contraband Department on the press-conference said that in January-October 2014 the State Customs Committee detained more than 99m cigarettes – that is two times more than the same period in 2013. Prudnichenka also noted the increase in contraband by rail through loose goods, timber products and goods from the woodwork industry – all of which are simply used for cover.

While illegal exports and imports hurt the EU's economy because of lost custom duties, smuggling actually benefits the Belarusian Customs Committee. For example in 2011 the Brest Customs Services department alone detained goods with an estimated value of $2.4m. According to Siarhei Poludzen from the State Customs Committee noted that border guards detain motor vehicle on the Belarusian border about three times per day. Later special auctions sell confiscated vehicles, tobacco, clothes and other detained goods in Belarus.

Individual Smugglers – Are They Really That Dangerous?

Low salaries and pensions in Belarus trigger increases in contraband. The typical individual smuggler is a man around 35 years old without a job and with a vehicle capable of transporting gasoline or cigarettes. Retired people, thanks to their small pensions, usually transport clothing and food from the EU. Later they sell these smuggled goods in EU countries by themselves or to traders in a border zone regions. However, in Belarus smugglers are subject to administrative liability, while in neighbouring Lithuania they adopted criminal liability for the same activity.

Individual smugglers cannot use entire railway cars for contraband, naturally. The customs service finds this all to be a profitable business as an increase in detained goods from individual smugglers provides additional visible evidence of them doing a good job. According to the value of confiscated goods moving to Poland – tobacco smuggling alone grew two-fold – up to 99m confiscated cigarettes in 2014. But in comparison with the total volume of shadow exports, which are estimated to be 8.7bn cigarettes, it is not so much.

But who can use railway for contraband in a country with such a strong security service apparatus? And even if it is a state shadow business – why are the Customs Committee intercepting more and more smuggled goods? Siarhei​ Prudnichenka noted that cooperation between the State Customs Committee and Japan Tobacco International, which provides money for vehicles and monitoring equipment, pays for training seminars for frontier guards. EU and American foreign tobacco companies such as British American Tobacco finance the Customs Committee to reduce losses from smuggling.

Next year the Belarusian Customs Committee can expect even more financing from its official foreign sponsors because of the visible results it has been achieving. Also the appointment of the new leader of the State Customs Committee gives a signal that the border guards may become more effective next year. Furthermore, according to the National Statistical Agency in the first nine months of 2014 the volume of official Belarusian tobacco export rose for 42% – which indicates either a shift to legal exports or an increase in production.

Need for the Better Customs Control

As a result of the illegal goods being sent to EU, it continues to loses custom duties and taxes – leading domestic firms produce less because of smuggling. At the same time, producers of other goods in the EU can even make gains because of cheap but illegal gasoline or raw materials like contraband wood. The estimated profits from tobacco smugglers alone is at least $1bn annually, which the EU's lost tax revenues exceeding $1.5bn. But a part of the smugglers’ profit goes to bribes which corrupts the state.

The problem of smuggling becomes even more important in the light of the discussion about the liberalisation of EU-Belarus visa regime. If the current results of the State Customs Committee work remains the same, the EU should review its policy towards Belarusian border guards. The new policy should include better monitoring of and support for the Belarus Customs Committee's work and stronger cooperation with border guards from EU member states.

Raman Kachurka is based in Brest and holds an MA in International Economics from the University of Warsaw.