· We, the members of the Belarusan-American Association, both American citizens as well as new immigrants, express our... 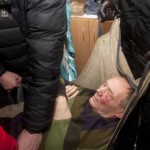 · We, the members of the Belarusan-American Association, both American citizens as well as new immigrants, express our concern with yet another election in Belarus, that was neither free nor fair.

· We condemn the brutal actions of the SpetsNaz forces in forcibly dispersing a peaceful demonstration in Minsk protesting the flawed elections at the conclusion of voting on December 19. We also protest the beatings and the arrest of the following opposition candidates: Nyeklayeu, Statkevich, Sannikau, Rymasheuski, Kastusyeu.

· Since free and fair elections are not possible without freedom of expression and without ongoing access to the local media, we are calling on the United States Government to provide sufficient support to such media that are directed to Belarus from the outside.

· Since the establishment of democracy, respect for human rights and the rule of law can be aided by relevant American institutions, we are therefore calling for the restoration of an effective and unhampered operation of the U.S. Embassy in Minsk, as a first step.

· Toward these ends we are calling on the U.S. Government to show greater engagement toward Belarus, balancing economic aid with sanctions against those responsible for the continuance of the dictatorial rule.

Fiasco for the West: Arrests Follow Beatings in Belarus

Instead of covering up the disgrace of the post-election brutality or at least keeping quiet after the OSCE declared vote count “bad and very bad,” reelected Alyaksandr Lukashenka rushed to arrest opposition leaders and presidential candidates. While Lukashenka could have done better by rigging elections with a smile rather than a scowl, the embarrassment is not his: he is simply being consistent and true to himself. It is Brussels and Washington who have cherished hopes for a different ending and are now facing a fiasco.

As the 2010 election neared, the usually lonely path to Minsk was walked by all sorts of Western leaders. First Guido Westerwelle of Germany and Radek Sikorski of Poland has brought good tidings from the EU, which offered Lukashenka a $3.6 billion aid package for holding a free and fair election. Then the United States praised Lukashenka for finally agreeing to give up Belarus’ stock of highly enriched uranium, though its Dec. 1 statement cautiously noted that “enhanced respect for democracy and human rights in Belarus remains central to improving bilateral relations.” By saying that Lukashenka’s victory would safeguard stability and limit Russian influence, Lithuanian president Dalia Grybauskaite outdid many, but not Italian Prime Minister Silvio Berlusconi who told Lukashenka Belarusians “love[d] him, which is shown by the elections.”

The attempt to civilize the Belarusian dictator has failed. In the light of the past events it seems naïve to hope Lukashenka could change after 16 successful years in power. Loosening the reins after all he had done as president would equivalent to suicide. The remarkable turnout at the post-election protest is likely to make Lukashenka even more cautious and unrelenting as now he has seen for himself that the people could stand up and make their voices heard no matter how much it costs them. It will cost them even more next time unless the West steps in.

Without independent media, Belarusians follow the headlines from the Official news agencies like Belta, which read: “Fair competition for votes in Belarus”, “Lukashenko ready to hear out some ex-candidate proposals,” “Belarus election follows EU, USA instructions,” “OSCE observers: Belarus made some specific improvements,” “Expert: Unsanctioned rally in Minsk reminds of Dark Ages.” While these headlines are too shameless and hypocritical to sound credible, they undoubtedly contribute to the sense of despair and powerlessness felt by many, and the West’s recent cozying up to Lukashenka has certainly contributed to that feeling.

Lukashenka’s behavior suggests that Washington and Brussels are unlikely to succeed at changing the president. Changing his people – who have already dared to stage the largest act of protest since 1996 – may be a more fruitful task, however.

The US and the EU support could make a real difference in reshaping the domestic balance of power in Belarus, were it geared toward strengthening the civil society and media in the country rather than rewarding Lukashenka for cosmetic improvements. While this approach will take longer than engaging with the regime directly, its effect will be deeper and truer. By empowering the Belarusian people and thus helping them internalize democratic norms and the concept of human rights, the West would raise the stakes for falsifying the next election and ensure that whoever comes after Lukashenka would not lapse back into authoritarianism.