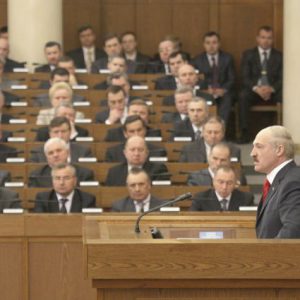 This echoed his New Year 2011 speech, when Lukashenka said that only those who had voted for him at the last election were worthy Belarusians, the opponent being outcast. Rather than seeking a substantial answer to the pertinent question of Belarusian national identity and that would unite the nation for the new century, Lukashenka started dividing the nation, and by force. Recent harsh sentences for opposition activists is yet another evidence of that.

Until recently, Lukashenka demonstrated a superbly sharp instinct for power, which helped him navigate many precarious situations in 17 years in power. That instinct led him to produce the ideology of independent Belarusian statehood. This ideology, applied with flexibility and skill, formed the corner stone of Lukashenka’s power in Belarus, much more than cheap Russian energy. His regime did rely on coercion, but also to a great degree on consent about protecting Belarusian independence, the point to which even the opposition could not but subscribe.

By the end of the 2010s, however, the idea of Belarus independence got so entrenched and constitutionalised, that another ideological boost became necessary. With a firm statehood foundation, Belarusians continued to lack a cohesive and clear sense of their national identity. Neither the 19 century nor Soviet ideas about national values and attitudes seem to hold water twenty years into the post-soviet era. Belarusians need a sense of themselves and their place in the present-day world. This, Lukashenka seems unable to offer.

It is very unlikely that purging ”good” Belarusians from the “bad”, will by itself yield Lukashenka the desired national identity. It may appear easier to preach to the converted, at the first sight, but one still needs to know what to say and what vision and goals to set to the audience, beyond further social policy spoils as the president has done so far. Not is only Lukashenka’s tactics time-delaying at most as regards social progress, it is also self-destructive. The approach of keeping unity but excluding dissent is unfruitful as it can eventually eliminate everyone out down to the last man.

A unifying ideology, instead, the one that finds place for diversity and dissent, can survive through the ages, and thrive in different economic conditions. Lukashenka does not seem comfortable with the idea though. Or perhaps he has reached his depth?

Four scenarios are likely to play out in Belarus in the short to medium term. The most likely one is the continued polarization of society and regime’s increased reliance on coercion rather than consent. This would involve economic austerity, protectionism and parazyting on the country’s transit status, under Lukashenka’s continued grip.

Another possibility is the emergence of a credible opponent that would pick up where Lukashenka has left in ideological terms and offer the society a unifying concept of national identity. A quick regime change by popular pressure will ensue, most likely in a more democratic direction. The social basis for such an ideology is consolidating, it remains to be the question of the right individual with the right agenda coming to the fore without his activity being nipped in the bud by the current Belarusian authorities.

Yet another possibility is Lukashenka’s concentrating and pulling out a credible – and unifying – national identity himself. Unless it has viable ways of incorporating dissent, however, the ideology would not last. The possibility is small, but should not be ruled out entirely. Lukashenka’s ability to play this scenario will depend on his perception of the vulnerability of his position and having an intellectual range of available solutions at hand. In this case, Belarus would become a neutral state trading equally with Europe and Russia, with a more relaxed and relatively legitimate regime, though not a liberal democracy.

The final one is Russia’s coming to buy up Belarus’s family chest, which would not, however, result in the loss of political sovereignty but will forestall any meaningful economic reform and progress. This scenario may well combine with the first one.

As long as Lukashenka continues dividing Belarusians into the “proper” and “improper” ones, he is losing ground as a credible and genuine national leader. The more the balance of his power basis tilts from ideological consent to political coercion, the more vulnerable his hold over Belarus becomes.

Natalia Leshchenko, PhD is an expert in political ideologies and national identity at the Institute for State Ideologies (INSTID) in London.

Is the Russian Ruble Coming to Belarus? 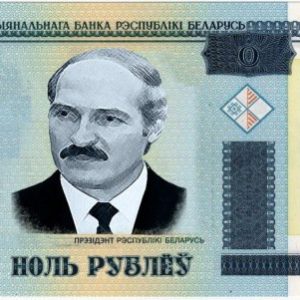 Establishing an ever more strict regime in Belarus after December 2010, Lukashenka so far faced no serious resistance. Numerous democratic activists fled abroad, many are incarcerated or awaiting trials, others are nearly paralyzed by police and security agencies surveillance and harassment, as well as fear.

For the first time in two decades the opposition failed to organize a traditional Chernobyl Rally on 26th of April, as only a few hundred people came to a meeting surrounded by police. Every participant searched at the entrance. The main opposition party – the Belarusian People’s Front – is about to lose its headquarters – one of the last remaining places in the center of Minsk where the opposition could still held its events. On 27th of April, the news came that the Ministry of Information and Print submitted petitions to close down two independent newspapers – Nasha Niva weekly and Narodnaja Volia. There is almost no doubt that the court will agree with the ministry.

The security checks in the Minsk underground are overwhelming and comparable to similar procedures in international airports. Belarus police have nearly completed fingerprinting of all men. Comments by opposition politicians on the terrorist attack led to their interrogation and resulted in effective silence on a range of topics by opponents of Belarusian government. This time the worn-out words about Belarus’ returning to the USSR will not be just a metaphor, but an ultimate reality. The country resembles a totalitarian state more and more.

The regime of Lukashenka is on the offensive against opposition, yet it is losing its battle on all other fronts. The desperation was evident for weeks, and exploded in Lukashenka’s derogatory remarks on named and unnamed European and Ukrainian politicians. The Belarusian leader seems to find himself in a trap of economic and foreign policy problems, yet he fails to come up with any new ideas how to run the country differently.

The absence of any new ideas was clearly demonstrated in Lukashenka’s yearly Address to Belarusian People and National Assembly last week. His intimidating passages against opposition were not new, as he vowed “to eliminate any ‘fifth column’”. More interesting was his will to continue current policies and stubborn unwillingness to admit any failures of his government.

Some were expecting economic liberalization from the new cabinet of ministers led by Mikhail Myasnikovich. However, Lukashenka accused the government of too much liberalism. The Belarusian leader himself did not put forth any economic program or proposals and seems to be merely waiting for new Russian loans. At the same time he reiterates his mantra – the current crisis has come to Belarus from abroad. Of course, nobody can expect him to say it has been caused by massive money injections to please the population before the elections.

Though Moscow is in no hurry to give the promised loans, Lukashenka is not going to admit any mistakes of his own in foreign policy either such as the complete derailing of Belarusian relations with Europe. In his annual address he characterized the state of relations with Europe just as a ‘time out’ and assured that this “time out will not last for a long time, we need each other”.

As for the United States, Lukashenka proclaimed, he is willing to speak to them if they are willing, but the US is not a priority in Belarusian foreign policy. The Belarusian leader also suspiciously made little mention of Russia in his annual address, and yet again praised China and the Chinese model.

The problem is that Belarus is not a self-sufficient country and it cannot struggle against the whole world on its own. It cannot rely on the EU or the West now, so it will depend on Russia, and all other ideas of the Belarusian leadership like friendship with China or other imaginative games are merely fiction.

In this context crackdowns on opponents and tirades against the West serve no populist agenda as in some third world countries, but undoubtedly push the nation into dependence on Russia. No wonder, one popular opinion in Belarus today is that the nation stands before some major development, like introducing the Russian ruble in place of the Belarusian national currency. On 27th of April the Russian ambassador proposed exactly that. The Belarusian National Bank said for a moment it is not an option.

However, the Belarusian government under pressure of economic problems and squeezed by Russian conditions for the awaited credit line can easily and very quickly change its mind. Behind closed doors of course, as so many times before. No one will hinder its actions, the political and public sphere are silenced and sterilized. Ordinary people are longing for a solution to current tensions with money and prices, and do not have any trust in National Bank and the national currency now. The last, but not the least, point is that such a move would serve a key candidate in the 2012 Russian presidential election – Vladimir Putin – as well, since it would grant him neo-Imperial glory – a helpful asset in Russian politics today.