Belarusian “Terrorists” On Trial: Any Hope for Justice?

On November 30, a Belarusian court is likely to issue the death sentence to the alleged perpetrators of the April terrorist act in the Minsk metro. Many in Belarus remain unconvinced that the suspects, two young men from the...

On November 30, a Belarusian court is likely to issue the death sentence to the alleged perpetrators of the April terrorist act in the Minsk metro. Many in Belarus remain unconvinced that the suspects, two young men from the northern province of Vitebsk, are guilty of such serious crimes.

The premature verdict could have major repercussions for the legitimacy of the Lukashenka regime. Contrary to official claims, there remains considerable uncertainty about the identity and the aims of the masterminds of the multiple bombings in Vitebsk and Minsk in 2005-2011. Admitting this uncertainty would undermine the official narrative of national security and stability that underpins the 'social contract' between the authoritarian government and the people.

Since 2005, a series of attacks has shattered confidence in public security. The 2005 Vitebsk terror attacks were downplayed by the authorities at the time as acts of hooliganism. The bombing on a national holiday in 2008, which resulted in scores of wounded casualties, already had a more detrimental impact. The attack on the central station of the Minsk subway last April, which killed 15 people and wounding 387 others, dealt a final blow to public confidence.

The public prosecution office has charged one of the defendants, Dmitry Konovalov, as the perpetrator of the Minsk bombing. He is also accused of illegally acquiring and storing explosives as well as producing at least twelve improvised explosive devices (IEDs). The prosecutors accuse the second defendant, Vladislav Kovalev, of being Konovalov's accomplice in the 2011 Minsk bombing.

“Confession of the accused is the queen of evidence”

In total, the accused face 23 charges. According to the prosecution, Konovalov and Kovalev have committed a total of ten crimes over the past decade, including four major bombings. A criminal dossier presented in the courtroom even refers to crimes committed when the suspects were just 14 years old. Many among the Belarusian public find these allegations dubious.

The popular blogger Budimir voiced the thoughts of many Belarusians when he asked how Konovalov, a silent and passive blue-collar worker, managed to lead a ten-year terror campaign and succeeded in detonating a bomb some 100 meters from the president at a 2008 public event. The defendant himself has literally cited a paragraph in the Criminal Code to define his motives: “To destabilize the situation in the Republic of Belarus.” The investigators failed to identify any affiliation of either of the suspects with a political party or ideology.

Notably, some victims of the 2011 terrorist attack testified that they did not consider the suspects proven guilty. A dissident and former investigator, Zmicier Petrushkevich, stressed that the only evidence is found in the defendants' confessions. Apparently, the Belarusian system of justice, like its Soviet predecessor, operates according to the principle of Stalin's hangman Vyshinsky: taking confessions from the accused as its best evidence. In most developed countries, the reliability of such evidence would be questionable. In fact, Konovalov claims he was tortured and endured psychological pressure.

Petrushkevich points out numerous contradictions in the prosecutor's claims. For instance, investigators have found no traces of explosives in the defendant's flat despite allegations that Konovalov had produced them at home. The bag in which the accused allegedly brought the bomb to the site has also mysteriously disappeared. Oddly, the investigators did not consider the possibility that the bomb might already have been brought to the site by someone else prior to Konovalov's arrival.

Perhaps most astounding is the fact that the bomb used in Minsk on Liberation Day in 2008 was most certainly produced under professional laboratory conditions. The cellar identified by investigators as Konovalov's 'lab' certainly does not live up to these standards. Other details are also dubious. Konovalov's attorney has stated that the videotape showing the defendant before and during the explosion was edited. But the court denied the request to use this videotape. For unexplained reasons, the court also refused to summon the police officers who had arrested the alleged terrorists.

Who trusts the Belarusian judiciary?

The court case raises the acute issue of capital punishment. President Lukashenka likes to refer his foreign critics to the 1996 referendum, in which 80.44% of Belarusians voted against abolition of the death penalty. Although the vote was denounced as fraudulent by international observers, Lukashenka stresses his respect for the will of the Belarusian people and points out that the decisions adopted by referendum are above the constitution.

This time, however, the doubts about the guilt of the accused are simply too great. This past Saturday, Lukashenka seemed to partially acknowledge this reality. Though once again demanding the harshest punishment for 'terrorists', the president suggested for the first time that capital punishment for Konovalov and Kovalev might be substituted with life imprisonment.

Lukashenka may be reacting to public discontent. In April, more than 60 percent of respondents at tut.by, the most popular Belarusian web-portal, said the explosions were organized by the government. The court proceedings only increased public skepticism about the defendants' guilt. The doubts are not so much caused by the minutiae of the investigation or the allegations of torture as by lack of public trust in the police and security agencies.

Yet Another Vitebsk Case?

This lack of trust can be led back to the many known cases of violent interrogation in Belarus. One of the most spectacular is the so-called 'Vitebsk case'. In 1971-85, 36 women in Vitebsk region were murdered, and the local courts sentenced 14 men for the crimes that, as later turned out, were committed by one man. One of the 14 suspects was executed, another became blind in prison, and the rest endured years of incarceration. Their admission of guilt was an inevitable outcome of the unfair system of justice. The analogy with today's terror case is evident.

While there is concern that innocent men may be executed, the continuing uncertainty about who actually committed the Minsk bombings has raised concerns about public safety as well. This strikes at the very heart of the legitimacy of the Lukashenka regime – security is a basic concern for every human being, and the regime knows it needs to provide this public good.

To be fair, the stories about the Russian involvement or provocation by the Belarusian security agencies seem implausible. But the public prosecutor's claim put forward in court is no more convincing. This suggests a more problematic reality: the government exerts less control over Belarus than it often claims. 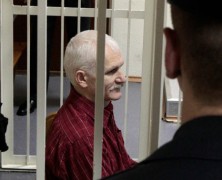 Today a Belarusian court sentenced human rights activist Ales Byalyatski to 4 and a half years in jail for tax evasion. The Belarusian authorities ignored yesterday's joint statement by EU High Representative Catherine Ashton and Commissioner Štefan Füle calling for his release. This verdict is widely believed to be politically motivated.

Over the last two weeks Belarusian analysts have been discussing other new legal developments: the recently established Investigations Committee, the "presumption of guilt" in Belarusian courts and increased legal pressure against NGOs.

Belarus tightens the screws on legislation –  Lukash Graevsky points out that the Belarusian government uses all possible means at its disposal to disable the work of non-governmental organizations with the reinforcement of legal norms. International organizations are trying to criticize and resist the present state of affairs; however, the new legislative norms seems to be a decisive issue. The author outlines the main infringements implied by the legislation.

Is the Investigation Committee going to become the most Important security service agency? – Siarhei Satsuk dwells on the growing influence of a newly-created Investigations Committee and speculates about the allegeable redistribution of power in national law-enforcement structures. The author stresses that possible problems may arise due to the Committee'svast range of powers, which should be controlled accordingly.

Nepotism will no longer constitute corruption – Aleksandr Myshin discusses the draft law according to which a technical ban for simultaneous public service of Aliaksandr and Viktar Lukashenka (his son) will be lifted with some amendments specifying the range of family relationships at stock. Previously, the service, which included direct subordination of public servants with a close relationship, was viewed as a serious corruptive violation. Nonetheless, in 2005 Lukashenka's son was appointed deputy of national security.

Will there be guest workers in Belarus? – Qualified people are leaving Belarus because to the economic crisis. Unlike the government experts, analyst Yuri Pshennik believes that people should be allowed to seek work abroad, because it is profitable to the state: people return to live in Belarus and earn money that is also spent in Belarus.

Reforms: Belarus changes to military style – The 2010 presidential candidate who was granted political asylum in the Czech Republic, Ales Michalevych, takes an ironic approach to covering the recent reforms in the country. Economic sluggishness makes the country's leaders resort to law-enforcement and military structures for help. The recent award of major-general ranks to the regional chiefs is a vivid example of such an approach.

Third Sector at the Swedish table – on November 13, Belarusian TV showed the plot, "exposing" the corruption of the domestic opposition. Journalist Dmitry Sergeichik suggests that the plot appeared because of the complete failure in the trial of Ales Byalyatski. The investigation has not been able to provide any way relevant documentary evidence of Byalyatski's guilt. Therefore, the state propaganda is trying to present the third sector as a totally venal and corrupt environment, devoid of any generous goals and in the process of turning into a private illegal business.

The format of discussions on Belarus should be changed – Andrei Hadanovich gives a broad view on Belarusian civil society and its culture, in particular, in an interview during the Cultural Congress of the Eastern Partnership in Lublin. He resorts to cultural renovation as the most appropriate and effective way of re-building and awakening society. Evidently, nowadays poets are more often listened to than politicians.

Belarusian foreign policy index # 4 – BISS presents the fourth edition of the Belarusian foreign policy index, which covers the period September-October 2011 and considers five foreign destinations. The general conclusion is that in isolation from the West, Belarus continues to drift towards Russia and gives in to any concessions necessary to please Moscow. Relations with the EU have not changed. The lack of a Western vector and pressure from Russia has led to some improvements in relations with Ukraine.