Last week Belarusians Andrey Zhuk and Vasil Yuzepchuk were secretly executed in the Minsk Detention Center No. 1. They were informed of the execution only minutes before they were shot. Their families were not notified that the execution would... 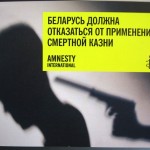 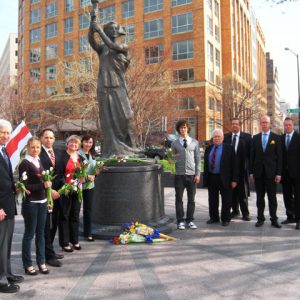 "Today, March 25, 2010, we are celebrating Belarusian Independence Day, that is, the proclamation of the Belarusian Democratic Republic in 1918. We are remembering the national patriots who fought for Belarusian statehood and fell victim to Communist aggressions," said Dr. Vitaut Kipel of the Belarusan-American Association when opening the wreath-laying ceremony.

The Victims of Communism Memorial was dedicated by President George W. Bush on June 12, 2007 to commemorate the more than 100 million victims of communism. The "Goddess of Democracy" is a bronze replica of a statue erected by Chinese students in Tiananmen Square, Beijing, China in the spring of 1989. It is located at the intersection of Massachusetts Avenue and New Jersey Avenue, NW on Capitol Hill in Washington, D.C. Many world leaders have already visited the memorial site to pay their respects and lay wreaths.

Members of the Belarusan-American Association continued Freedom Day celebrations at the American University, where they hosted a reception featured lecture/discussion, films, music, displays as well as traditional Belarusian drinks and snacks.