DC-based and Belarus-born Evgeny Morozov on Internet and Authoritarianism

22 September 2009
Evgeny is known to Belarusians of Washington because of his article in Newsweek on how this blog had been shut down ealier this year. You can watch his talk on how authoritarian regimes use internet below.

Evgeny is known to Belarusians of Washington because of his article in Newsweek on how this blog had been shut down ealier this year. You can watch his talk on how authoritarian regimes use internet below. 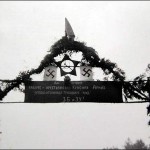 Yesterday was the seventieth anniversary of yet another alteration of the Belarusian borders. On September 17, 1939, Western Belarus was reunified with Eastern Belarus and the Red Army marched into Poland. The reunification was made possible by the Molotov-Ribbentrop Pact, concluded between the Soviet Union and Nazi Germany a month earlier.

Eighteen years earlier, at the end of the Polish-Soviet War, Belarusian territories were divided between Poland and Soviet Russia under the terms of the Peace of Riga. Poland acquired Hrodna and Brest oblasts as well as the parts of today’s Minsk and Vitebsk oblasts.

How did the Belarusians fare under the 18-year-long Polish rule? Immediately after the Peace of Riga, a Belarusian party was able to obtain seats in the Polish parliament. Starting in 1923, Belarusian courts and schools were able to officially use the Belarusian language, which was taught in all Polish gymnasia in areas inhabited by Belarusians. However, by the late 1920s the relationship between the Belarusian minority and Polish authorities soured. Many Orthodox churches and Belarusian schools were closed and political opposition suffered state repressions.

This is why in September 1939 the majority of the Belarusian people welcomed the Red Army waving both red and white-red-white flags. However, the Soviet terror soon disabused them of their enthusiasm. In total, over 100,000 people were deported from West Belarus to the eastern parts of the USSR.

In its history, the map of Belarus endured more changes than the map of any other European nation. Some of the Belarusian people had lived in three different countries without ever changing their addresses. Others lived in no fewer states because they were exiled or deported.

The most recent attempt to unify Belarus with another country failed. The Belarus-Russia Union State, the foundation of which was laid with the signing of the Treaty on the Union between Belarus and Russia in April 1997, never came into existence. It was the first attempt at unification conducted on a voluntary basis. The Union did not actualize not because Belarus stood up to its imperious neighbors, but because the plans of the larger of the uniting countries, Russia, changed.

Read more about the reunification of Belarus: http://www.euroradio.fm/en/975/reports/38375/