The Polish press most frequently reported on the teddy bear affair over the last weeks. The newspapers follow the actions undertaken by the Belarusian authorities aimed at the investigation and punishment of those related to it. Other issues... 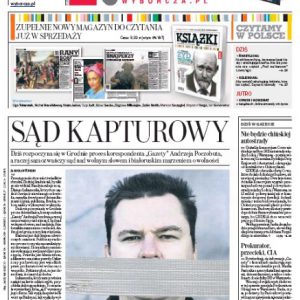 The Polish press most frequently reported on the teddy bear affair over the last weeks. The newspapers follow the actions undertaken by the Belarusian authorities aimed at the investigation and punishment of those related to it. Other issues covered include the September parliamentary elections, the opposition, the regime’s internal games and the consequences of the Belarusian economic crisis.

The Teddy Bear issue was broadly covered by the Polish press.  Polska The Times reports on the repercussions aimed at the officials responsible for the air zone security. Two generals Ihar Rachkouski and Dzmitry Pakhmielkin have already been dismissed for the alleged failure of their duties which resulted in the light aircraft entering Belarusian territory from which the individuals on the plane threw out the teddy bears over the country.

Gazeta Wyborcza reports that an "electoral war" is taking place in Belarus. According to the newspaper,  Lukashenka’s regime, through the repression of the opposition and intimidation of its own political apparatus, is about to mobilise its political apparatus. The newspaper suggests that these actions are accompanied by an intensified anti-corruption campaign aimed at the administration's employees to signal that the repression can touch anyone who is against the regime.

While the regime consolidates itself, the political opposition remains divided over whether boycott of the elections or participation in them would be the best. Gazeta Wyborcza reports also on the formation of the election committees and low number of opposition representatives, which is less than in the last parliamentary elections in 2008. It highlights the fact that according to political activists, opposition candidates are often not registered.

Polska The Times informs that Alexandr Milinkievich, a leader of the For Freedom movement, announced his intention to take part in the parliamentary elections campaign. In the aftermath of his failure to win the 2006 elections, he did not take part in the following elections. The newspaper cites Milinkievich arguing that his decision to actively campaign in the September elections is due to the fact that the Belarusians should understand the necessity for change and have a sense of responsibility for the country. The newspaper also stated that there is no unity among the political opposition in Belarus in regard to their strategy for participation in the elections.

Gazeta Wyborcza informs that two other ex-candidates of the presidential elections will not take part in in the electoral campaign, Mykola Statkevich and Ales Michalevich. The chairman of the Central Election Commission of  Belarus, Lidia Yermoshina, explains that neither have created groups that could collect the necessary signatures for their lists.  With regards to Statkevich, she explains that the prisoner could not apply for  registration of such an initiative group. Michalevich, on the other hand, does not live in Belarus and has a standing international warrant from Belarus.

One Day in the Life of the Opposition

Gazeta Wyborcza reports that President Lukashenka signed the amnesty bill. Thank to this bill, over 2000 people will be released. However, the independent media suggests that no political prisoners will be set free. Among those who will be embraced by the amnesty might be people sentenced for small petty crimes, pregnant women,  and under some conditions also those sentenced for abuse of power and position as well as others. Elsewhere the newspaper reports on Lukashenka’s preparations for the upcoming elections.

Wprost suggests that the pressure upon independent activists in Belarus has increased over the last few months. The Belarusian courts charged Dzmitry Wus and Andrei Mouchan due to their anti – regime activities. It claims that imprisonment of the youth and political activists is on the rise as are bans on leaving Belarus.  The newspaper comments on the new wave of political prisoners, like Vasil Parfiankou, arrested for 6 months for breaking his terms of release.

Newsweek deals with the issue of the imprisonment of Andrzej Poczobut, a chairman of the Governing Council of the Union of Poles in Belarus, unrecognised by official Minsk. He has been charged with the defamation of President Lukashenka.  It further reports the opinion shared by many independent media outlets that the authorities treat the issue as a bargaining chip in regard to relations with Poland and a signal to journalists to stay quiet leading up to the upcoming parliamentary elections.

Rzeczpospolita takes a closer look at the recent mass purchase of foreign currency by Belarusians, despite the fact that authorities have established certain barriers against it. According to the newspaper, it will lead to the bankrupting of the economy, though potentially not as severe as last year's crisis. The purchase of foreign currency in banks increased in June to 20.6 per cent. An increase in inflation and other negative tendencies in the economy can spread even more panic among Belarusians.

Rzeczpospolita argues also that the Belarusian authorities falsify statistics on the Belarusian economy and hide the true level of unemployment in Belarus. By proving this statement using the data of the World Bank, the newspaper suggested that its level is even seven times higher than what the official data presents. According to the newspaper, there are more problems related to the low benefits payments and unemployment registration procedure, which discourage jobless people from searching for a job. Moreover, lack of interest in the privatisation, both by the heads of state–owned companies, but also by workers, are among the reasons why the Belarusian economy has lost its dynamism over recent years.

Wprost comments on the economic situation in Belarus. It reports that Minsk asked the Anti – Crisis Fund of the Eurasian Economic Union for the next tranche of its loan. It noted that the sum of the three previous tranches  is estimated at $1.68bn.  At the same time, the authorities also declared increases in the prices of  communal service (utilities) and transportation. Wprost also pointed out that in 2011, Belarus was credited for a $3bn loan from the EurAsEc.

Social Effects of the Crisis

Rzeczpospolita writes about the social effects of the economic crisis, calling it ‘Belarus' minor stabilisation'. It argues that the crisis has resulted in further economic and political dependence on Russia, and furthermore it has  also led to the impoverishment of society. The financial assistance from Moscow, particularly lower prices for gas, duty free oil and the purchase of Beltransgas by Gazprom, helped Minsk to manage inflation. At the same time, the current economic situation has led to Belarusians losing their political engagement and interest in the upcoming elections, which is the real factor that could eventually bring about significant changes. 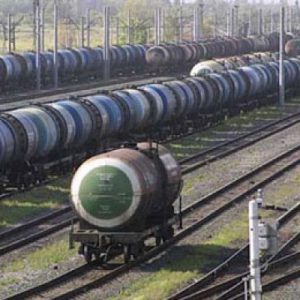 Despite the proclaimed common Russia-Belarus way to prosperity within the Customs Union, neither country is ready to sacrifice individual economic interests for this cooperation.  On 24 July Russia stopped railway deliveries of straight-run gasoline – the main raw material used in solvents’ production – to Belarus. This was the culmination of this summer’s solvents conflict. The measure is timely, but is likely to result in considerable deterioration of Belarus' economy’s performance.

During the first five months of 2012 Belarusian trade and services surplus amounted to $3bn, compared to the yearly forecast of $1-1.5bn. For Belarus, which suffered greatly from insufficiency of foreign trade last year, these results were a real success. The joy has, however, faded away due to quite unexpected revelations.

The pleasant figures resulted from Belarus' evasion of its obligations under the terms of the Russia-Belarus oil agreements. Belarus started to export oil products under the label of solvents ‒ liquids used for dissolving other substances, manufactured with use of straight-run gasoline, but not classified as oil products. That meant Belarus’ economic growth is achieved at Russia’s expense.

Rise of the Conflict

The rise of solvents’ exports attracted the attention of Russian authorities already in the spring of 2012, and the suspicions that Belarus' exported oil products under the solvents’ label started to grow. On the official level there was no place for such concerns until June 6, when Russia’s ambassador to Belarus Aleksandr Surikov noted that “Belarusian import of Russian oil products increased several times, including four times during 2012”. He also added that “Belarus imports more than it needs for internal consumption” and that “in the Customs Union some reports of solvents and thinners, not being subject to duties, have appeared”.

The Head of the State Customs Committee of Belarus quickly assured authorities that all oil products’ deliveries were legal, but this did not satisfy Russia. On 15 June, Dmitry Medvedev instructed the authorised Russian state bodies to analyse the situation with the solvents. The investigation resulted in a declaration by the Russian Deputy Minister of Finance that Belarusian solvents may serve as “a cloak for the export of oil products”.

However, there has been no single direct evidence of such violations yet.

During the period of the Customs Union’s creation, the two countries agreed that Belarus would be entitled to import Russian oil on a duty-free basis, but also undertook to transfer to the Russian budget the whole amount of export duties on “crude oil and certain categories of products produced from oil (“oil products”)” exported from its territory to third-party countries.  Export duties from the extraction of its own oil (estimated 1.7m tonnes a year) go to the Belarusian budget.

The agreement aimed at settling the long-lasting oil wars of 2010 between the two countries. And until now it coped with this role. Russia delivered oil to Belarus without any duties’ requirement. Belarus, in compliance with its international obligations, transferred to the Russian budget $3.07bn of export duties on oil products exported to third-party countries in 2011. In January-April 2012 the amount was $1,472.6m. The business seemed to be mutually beneficial.

The solvents never were within the scope of the agreement before, since they are not classified as oil products. Accordingly, Belarus has not transferred to Russia export duties on solvents. At the same time, if Belarus actually exports oil products under the solvents’ label, it turns out to be guilty of evading its obligation to pay the export duty on them to Russia and threatening the fragile oil truce.

The amount of money at stake aggravates the situation. The alleged losses to the Russian budget from the illegal export of solvents amounted up to $1bn. According to Belarusian economic analyst Yaraslau Ramanchuk, if the same rules as those established for oil products apply to export of solvents, GDP growth of Belarus may decrease by 50%. But for these figures, the countries would probably avoid a revelation of these types of troubles to preserve the image of successful Belarus-Russia cooperation.

The political factors, however, can also play a negative role: the truth about this whole situation may never come to the surface. However widely announced the discussions of the solvents’ problem were by the prime ministers of the two countries, all we know is that the two states agreed to examine the case and to right a wrong. Though the top-level meetings took place more than two weeks ago, their findings have not been published.

There, of course, may be one more reason for this silence. If Russia’s allegations are justified, the question of who is guilty is going to arise. And the answers may be unpleasant. Belarus has two major solvents’ exporters, one of which is Triple, famous for its owner's very close relations with Alexander Lukashenka.

Could the solvents be illegally exported in such great amounts without participation of Triple and could the head of Triple act without authorization from higher-ups? Belarus analysts also claim it is a rhetorical question whether Belarus could implement the alleged scheme without Russian oil oligarchs’ participation.