This reflects not the true level of support of the opposition, but rather Aleksander Lukashenka’s willingness to demonstrate good will to the European Union.... 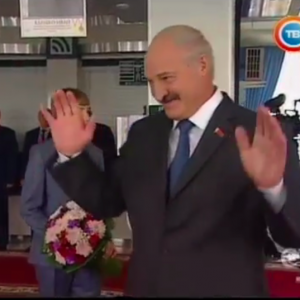 A. Lukashenka at the polling station on 11 September 2016

This reflects not the true level of support of the opposition, but rather Aleksander Lukashenka’s willingness to demonstrate good will to the European Union. The West, however, should not get too excited about this progress.

Belarusian authorities have made clear that changes in the electoral process happen not because of domestic pressure but to please the West. Indeed, the prospect of massive domestic protest is almost non-existent, largely because of events in Ukraine. However, the economic crisis in Belarus is pressuring the authorities tired of being outcasts in Europe to diversify their partners.

So what messages are the authorities trying to convey to the West?

Each of these messages should be taken with more than a grain of salt.

It is true that the authorities remain entirely in control of the election process. The number of opposition representatives in the election commissions remains minimal; early voting and non-transparent ballot counting procedures allow the authorities to appoint anyone they want to Parliament while bypassing the election process. They have no serious intention of giving up control of election results and even the possible departure of Lidia Jarmoshyna will not change this. 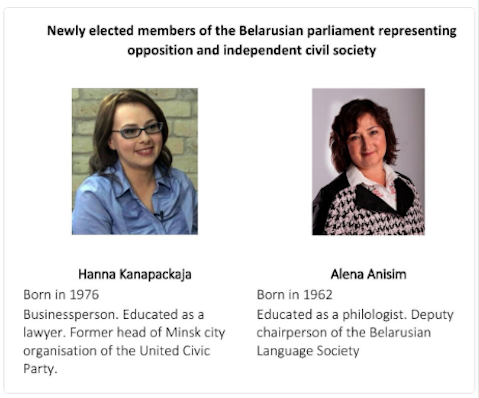 Election results fixed in the vast majority of polling stations fail to reflect the real preferences of Belarusians. With independent sociology on political issues virtually non-existent, it is hard to judge the true level of support for the opposition.

However, allowing two pro-democracy MPs means that alternative opinions will finally enter the Parliament. It will also improve the morale of the opposition.

However, the Parliament plays a merely decorative role in the current political system. In practise it initiated no laws, rubber-stamped all decisions of the executive and its members never seriously criticised the authorities. Moreover, the president can overrule any law with a personal decree.

Should allowing  two pro-democracy members lead to recognition of the Parliament in the West? The parliament should be treated as a decorative rather than a decision-making institution – as a symbolic organ which plays no real role in the political decision-making process.

In other words, it makes little sense to have serious negotiations with the Parliament not only because it is far from being representative but also because it plays no serious role in politics. Any deputy minister probably plays a more influential role than the speaker of the lower chamber of the Belarusian Parliament.

The authorities allowed two non-regime MPs out of 110 future MPs. At the current pace of liberalisation it would take Belarus hundreds of years to attain free and fair elections of all MPs.

However, the West needs an excuse to cooperate with Belarus for geopolitical reasons. Belarus matters as a part of the European security puzzle, as a country which transits energy, migrants and goods.

Normalising relations with the Belarusian authorities should not be an aim on its own. Not only security and geopolitical goals should drive cooperation but also concrete projects to improve the lives of Belarusians. These should include anything from visa liberalisation and improving the business climate to cooperation in education, exchange of know-how, and institutional and rule of law reforms.

The West will persist with its demands of liberalisation in Belarus. But the modest improvement seen during these elections will make it easier for Belarusian society and the international community to accept the greater degree of pragmatism in the West's attitude towards the Belarusian authorities. 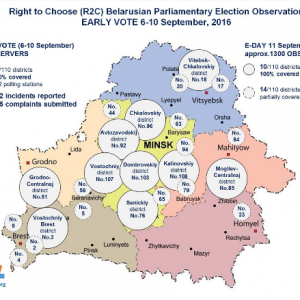 The five-day early voting period of the 2016 Belarusian parliamentary elections took place from September 6 to 10. The main Election Day is Sunday, September 11. Polls are open from 8 AM to 8 PM. In these elections nearly seven million Belarusians are eligible to cast their ballots for one of the 484 parliamentary candidates running for 110 seats.

This report on early vote trends was compiled based on information published by governmental bodies, media, and social network users and information received directly from Belarusian parties, and observer groups.

Major problems identified by observer groups include increasing turnout though forced and incentivized voting of students and workers, as well as artificially inflating turnout though protocol or voter list manipulations. Parliamentary elections in Belarus can be declared valid if more than 50 percent of eligible district voters cast their ballots. The security of ballot boxes and overall transparency of the early vote were major concerns of observer groups as well.

Electby.org in partnership with HRD and R2C launched a mobile application “Vochy” to allow citizens timely and anonymously report violations. Citizens may also report violations directly on the websites of R2C, HRD, or Electby.org. Electby.org also acts as an observer aggregator publishing violations reported by citizens and the above mentioned election groups. 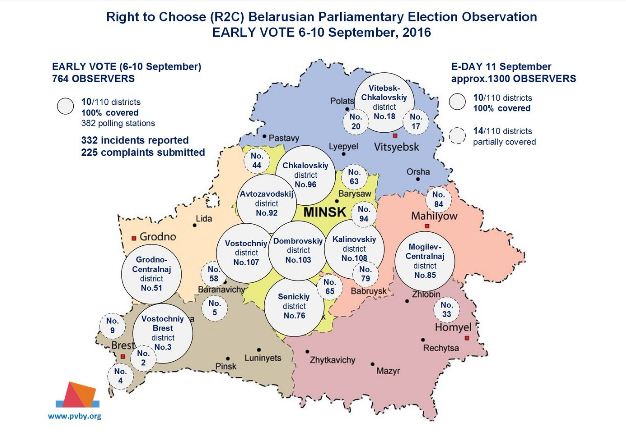 R2C deployed 764 observers to monitor 100 percent of 382 polling places in ten parliamentary districts during early vote. These districts will also have full monitoring coverage on the main election day. Monitored districts were selected based on where prominent democratic candidates from R2C member organizations are running (see R2C candidate page to find violations and turnout for a particular candidate’s district). HRD deployed 364 observers at 182 polling stations throughout the country. According to TtT they deployed 180 observers at 90 polling stations in three districts.

R2C reported 332 incidents and filed 225 official complaints regarding the Electoral Code violations in five days of early voting. Below is the R2C infographic reflecting the major types of violations recorded by independent campaign observers during the whole five-day early vote period. 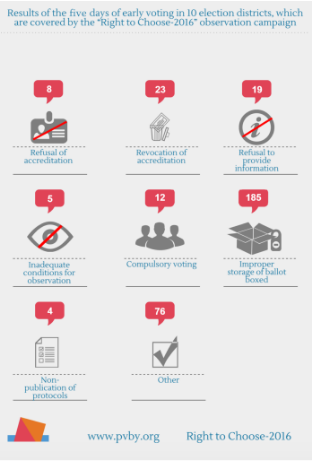 As a result of their parallel turnout count, R2C found that official and observer turnout overlapped only in 69 of 382 observed polling stations, highlighting significant levels of artificial turnout inflation. The turnout discrepancies per fully observed parliamentary districts are noted in the table below.

HRD’s 364 observers recorded a 14 percent turnout discrepancy at the 182 polling stations where they observed. 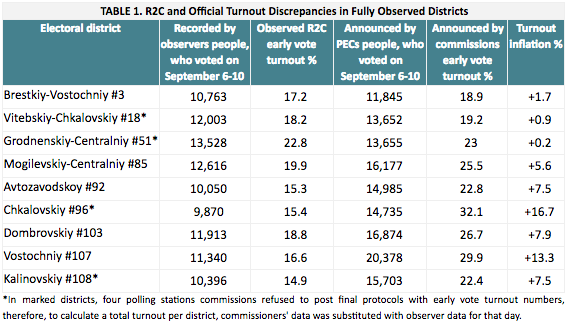 Discrepancies at the individual polling station level are best reflected on the Electby.org website, which used R2C data to construct detailed infographics. As shown in the following Electby.org chart of parliamentary district #92 (Avtozavodskoy in Minsk), a number of polling stations inflated turnout, some of them significantly, like polling station #70, where on September 9 the official turnout was 187 voters higher than R2C observed.

HRD reported that in electoral district #14 in Bobruisk, an observer challenged 157 votes written in September 8 protocol, because she calculated only 37 voters that day. As a result, the protocol was edited. PEC staff recorded it as a “technical mistake”. The new vote total, however, still did not match the observer’s. A similar incident was reported by R2C at the polling station #32. 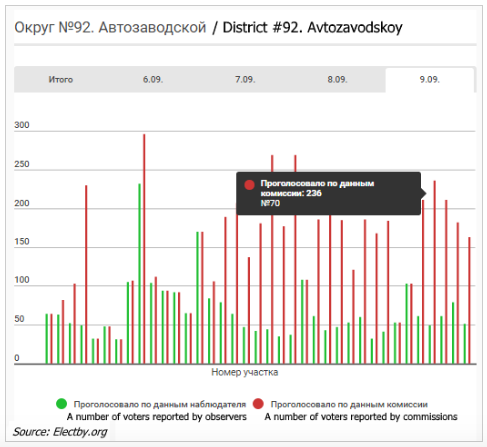 According to R2C reports, election commission efforts to boost their turnout percentage sometimes are a result of reducing the size of voter lists. At polling station #422 in district #103, observers noted a “voter list manipulation” on September 7, when the total number of voters was decreased without explanation by 879 people. At polling station #71 of district #18 in Vitebsk, the voter list was shortened by 191 people. These cuts resulted in an increase in the turnout percentage.

‘Carousel voting’ was reported as another mechanism used to increase turnout. Yuri Gubarevich, a parliamentary candidate from movement “For Freedom”, a R2C coalition member, informed observers about ‘carousel voting’ in his Kalinovskiy electoral district #108 in Minsk. He claimed a blue minivan brought the same group of people to vote at different polling stations. 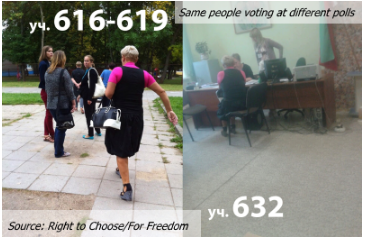 Certain social groups, such as students or workers of state-owned enterprises are most vulnerable to forced or incentivised voting during the early vote period. They tend to cast their ballot several days before the E-Day. Prior to the early vote, HRD appealed to the administrations of higher education institutions noting that “any form of forcing students to vote in elections is an unacceptable violation of the constitutional rights.”

An anonymous “Vochy” user reported that “Belaruskaliy” workers had two hours free from work to vote early. RFE/RL reported forced voting of convicts. In this case a policeman left a number of passports with the head of the local commission and returned later to pick them up. Some cases of organized voting were reported on Electby.org, including a photo of military conscripts heading towards the polling station.

At polling station #6 in Baranovichi, R2C observers reported than an ineligible 17-year old student of Baranovichi State University was brought by an elder of the student group to vote early on September 7.

Another effort to ensure a high turnout was the organization of parental meetings at schools during the early vote period. For instance, in Bobruisk gymnasium #2, where polling station #4 is located, parents were asked to attend meetings on the second and third day of early voting. The parental meeting was attended by a Belarusian Republican Youth Union (BRSM) representative who is also a proxy of a pro-governmental candidate. The proxy promoted her candidate and encouraged parents to vote. 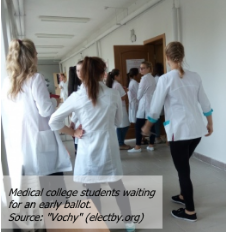 A notable example of ballot stuffing was reported at polling station #625 of parliamentary district #108 (Kalinovskiy) in Minsk. An R2C observer took a picture of “tightly packed ballots” put inside the transparent ballot box. The existence of a “tight pack of ballots” raised his suspicion because ballots cast one at a time should be loose.

The Observer also emphasized that he counted 42 voters on Friday, while a PEC claimed 228. Later, the chief commissioner of the polling station rejected the ballot stuffing claim as a “provocation”. The chief commissioner also claimed the turnout discrepancy was the result of mistake by the commission secretary who wrote down the cumulative turnout instead of the daily vote total. Yermoshina said the “truth will be found after the vote count.” 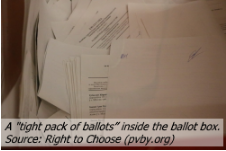 R2C observers reported five incidents in which they were not able to properly conduct observation. In 19 cases local commissions refused to provide requested by observers information. On the left you can see a picture taken by an HRD observer titled “the place for observer in Belarus.” The image shows the observer was placed outside of the voting room. 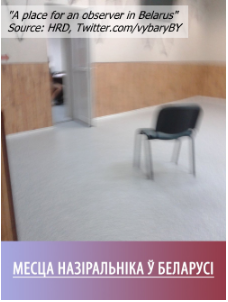 Some independent observers could not begin the observation due to pressure. For instance, R2C reported that the administration of the Gomel State Technical University forbade students from observing elections on behalf of the R2C campaign.

According to campaign representatives, students were threatened with the expulsion from the university. In Grodno, R2C observer refrained from election observation claiming his wife was threatened with a job loss by the ideology department in a state hospital.

Authorities Get Ready for the Election Day

The Ministry of Antimonopoly Regulation and Trade of Belarus sent local authorities instructions how to please voters with food and other treats during the election day. The instructions were leaked to R2C and re-published by independent media. The same day, state media highlighted what food and entertainment will be available to voters at the polls.