May became a momentous month for western media coverage of Belarus. While Minsk was awash with foreign and local ice hockey fans taking in the World Ice Hockey Championship, the international press stuck to almost exclusively covering the matches... 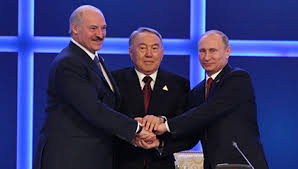 May became a momentous month for western media coverage of Belarus. While Minsk was awash with foreign and local ice hockey fans taking in the World Ice Hockey Championship, the international press stuck to almost exclusively covering the matches themselves.

The recent signing of an agreement between Russia, Kazakhstan and Belarus for the formation of the Eurasian Economic Union momentarily shifted some attention away from the ongoing crisis in Ukraine. The Belarusian authorities did not however escape international scrutiny, despite its recently elevated image.

A proposed law that would create virtual serfdom for rural labourers, which has yet to be signed, renewed concerns about civil rights in Belarus. A recently published WHO report portrays Belarus as the world’s heaviest drinkers, while a new book of photography examines the peculiar state of contests in Belarus.

All of this and more in the latest edition of the Western Press Digest.

Belarus Joins Russian-led Eurasian Economic Union – After years of preparations and negotiations, Russia, Kazakhstan and Belarus met in Astana to sign a treaty signalling the creation of the Eurasian Economic Union. Russian President Vladimir Putin stated that the new economic Union will bring over 170 million people together and form a powerful regional economic bloc. AP noted that the union’s expected $2.2 trillion economic output was roughly equivalent to that of Britain.

Lukashenka was not entirely happy with the final deal that the three former soviet republics reached as it did not reflect many of the concerns Belarus had previously brought to the negotiation table. The Belarusian head of state was also reported as having said that Ukraine would “sooner or later […] understand where the nation’s happiness lies.”

Will Russia Absorb Belarus? – Belarus is a nation with a very underdeveloped sense of national identity, a trait which could prove to be fatal to its sovereignty according to an article in the New Statesmen. The author describes Belarusians as not nearly regionally divided as their southern Ukrainian neighbours, and while they consider themselves to be distinctly Belarusian, they struggle to define precisely what that means.

Russia’s recent aggression towards Ukraine has some Belarusians concerned and may lead to the Lukashenka regime seeking deeper rapprochement with the EU in order to preserve itself in light of perceived Russian regional ambitions.

Serfdom Returning to Belarus? – In an attempt to stop urban migration and maintain labour levels on the nation’s farms, Belarusian ruler Alexandr Lukashenka is considering signing a decree that, according to him, is tantamount to serfdom.  Regional governors, according to the FT piece, have not been fulfilling their quotas on time. The decree would give regional governors more power over the movement of rural labourers and essentially tie them to their land and stem urban migration.

The ostensible reason for the decree is to make sure that the rural labour force does not abandon their fields. The report also notes that in 2012, timber industry workers were also prohibited from leaving their jobs despite the fact that it was in direct violation of the 1957 international convention on the abolition of forced labour. Russia may object, however, if the decree is passed as the freshly signed Eurasian Economic Union treaty stipulates the free movement of work forces within the union.

Belarus’ Best of the Best – and Other Oddities – Slate.com provides coverage a Polish photographer went to Belarus to explore the various kinds of contests that were held in a country the photographer describes as “over tidy, over clean, almost too perfect”.

The final collection of photographs (some featured in the article) show the apparent winners of awards ranging from “The Best Policeman of Minsk” to “The Best Large Family in the Smorgon Region”. The photographer worked with a local Belarusian journalist to identify these and other “interesting contests” representing a variety of interests and took pictures that tried to provide a raw image of their winners.

Belarus On Top of the World… in Alcohol Consumption – A recent WHO report, which looked at data from 2008-2010, has established Belarus as the world’s leader in drinking per capita per year, followed by Moldova, Lithuania and the Russian Federation. On average, Belarusians drink 17.5 litres of pure alcohol a year. This figure is nearly double that of the United States, who consumes around 9.2 litres per year, and is nearly triple the world average of 6.2 litres per year.

Belarus Free Theatre Takes Centre Stage – A leading British Theatre director Michael Attenborough is calling on Prime Minister David Cameron to start getting serious about pressuring Belarus on its civil rights abuses. This statement comes after Attenborough spent a week touring with the Belarus Free Theatre inside Belarus (where the theatre company is banned from performing) for a week.

The theatre director reported meeting with the co-founder of BFT’s father, who had reportedly lost his job due to his daughter’s association with the company. One of the events that was put on during his stay was raided by the police, but allowed to go on. Another took place in a forest outside of Minsk. Attenborough goes on to give a grim description of Belarus, calling it “a completely joyless place”, though praises the risks that BFT put itself through for the sake of freedom of expression.

Swedish Human Rights Activist Denied Entry to Belarus – On the eve of the Ice Hockey World Championship, Belarus denied entry to the head of the Ostgruppen human rights group for, ironically, alleged human rights abuses. Radio Free Europe/Radio Liberty also noted that around 20 opposition activists were detained in jail for a period of 10-25 days, which was seen as a preventative measure by the authorities to keep protests and civil unrest out of the public’s eye while the Championship games were going on in Minsk.

World Ice-Hockey Championships in Belarus: What did Journalists See beyond Sport? 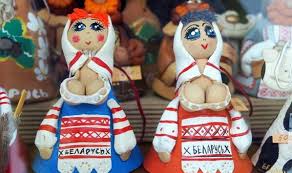 The world knows little or nothing about Belarus. The ice-hockey championships opened up the country not only to tourists, but also to journalists. How did they use this opportunity?

Barring presidential elections, the World Ice-Hockey Championships was the first event in the history of independent Belarus to bring international attention to Minsk. According to Belta, as many as 260 journalists from outside Belarus had accreditation. Few, however, wrote about life outside the ice-hockey arena.

Turn your home into Hockeytown with a custom synthetic ice rink! Your basement, garage, backyard, attic or pole barn are all perfect locations for a KwikRink Synthetic Ice rink. All you need is a flat surface.

A tale of two cities

As always, two images of Belarus were presented.

Let’s start with the official version. The authorities flaunted their organisational skills and made every effort (in different languages of the world) to showcase the national pride: ice-hockey. Whereas media from Latvia (the previous hosts of the Championships) did not question the Belarusian president’s political leadership, the same is not true for another EU neighbour: Poland. The Polish team did not take part, but its media was there. And even the sports commentators didn’t forget to mention the tougher truths that were not on display in the shop window.

Civil society offered a different vantage point. Thanks to a variety of initiatives, the world learnt about political prisoners, forced labour, punishment for free-thinking, and above all that free expression of thought could be subject to severe punishment.

Belarusian human rights defenders managed to reach western audiences. Most often, the media quoted representatives from Viasna Human Rights Centre. Actors, artists, and directors from different countries joined forces to bring light to human rights issues in Belarus in an open letter published in The Guardian, and an article in The Hill, a blog for U.S. Lawyers and policy professionals did not forget to mention LGBT rights in Belarus.

In March, some questioned if the no-visa regime would live up to its promises. By and large, it did. Andrei Bastunets, from the Belarusian Association of Journalists, commented at a press conference in Warsaw that

apart from a few incidents, journalists have not encountered any particular problems in their work. However, the ‘cleansing’ of Minsk was carried out with the journalists in mind. So as not to give them the ‘wrong picture’ – and to do this by not hindering the work of journalists, but trying to clear people out of the frame who could ‘spoil’ it.

I noticed a lot of differences – the authorities didn’t seem as powerful. They let us journalists do anything we wanted, to see that Belarus is no longer and empty and sad place but a place full of people and their ambitions.

There were, however, a few isolated incidents in which journalists were prevented from working: a Minsk-based BBC correspondent had her accreditation revoked prior to the event; militsia intervened when a Finnish TV crew dared to interview people outside the stadium; and border guards asked a Channel 4 journalist to leave the train as his multi-entry work visa had purportedly been cancelled two months’ prior to the event.

But now that tourists and international journalists have gone home, the crackdown on independent media inside Belarus has started. Svobodnie Novosti Plus, a non-state Belarusian newspaper, received a warning for its “negative coverage” of the Championships. Two more warnings within one year would effectively mean closure.

Drunken fans, delicious potato-pancakes and souvenirs – and what else?

Most of all, Lukashenka piqued journalists’ interest with the idea of supporting Belarus-produced products, above all – beer and ice-cream. The image of fans holding pints of beer in a campaign, present in every photo-reportage, came to symbolise the “Volat” championships.

Corruption – or more precisely, the lack of it – was a recurrent theme in media both inside and outside Belarus. This drew a sharp contrast to the Sochi games which sparked allegations of money-laundering by government officials. As Belarus’ president first rose to power on an anti-corruption ticket, such coverage should help bolster his clean image at home.

Media in the regions outside Minsk, however, failed to spill much ink on the event in a sign of “silent protest”. After all, it wasn’t in their backyards that new hotels were built and 2,000 new jobs created. More to the point, everyone saw the Championships as Batka’s personal PR project.

Hidden among the jumble of hockey symbols, important topics did not go unnoticed by outside media. Journalists explored topics ranging from the dictatorship, political prisoners, and the Championships as Lukashenka’s PR project, to attitudes to the Russian-Ukrainian conflict and the EU’s eastern policy.

Never before has Minsk seen so many western tourists. Most likely the Championships will leave behind a certain imprint, along with the hope that Minsk can also be European. “From now on, Belarus will always be different. Her citizens will see that a colourful crowd of foreigners is better than isolation”, opined Lukasz Jasina.

Belarusians need some time to reflect on the event. This change will be noticed not only by those who have been in the West, but everyone who knows that a campaign of more than three people in one place can be viewed by the authorities as unsanctioned pandemonium.

And sooner or later, a third image will emerge that international media will rush to capture. Until then, initiatives that seek to shine a light on Belarus should continue.