Prime Minister Mikhail Myasnikovich is a veteran of Belarusian politics. He served as Deputy Prime Minister of Soviet Byelorussia and then independent Belarus and was the key aide of Prime Minister Kebich, the main rival of Alexandr... 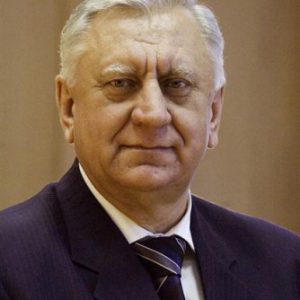 Prime Minister Mikhail Myasnikovich is a veteran of Belarusian politics. He served as Deputy Prime Minister of Soviet Byelorussia and then independent Belarus and was the key aide of Prime Minister Kebich, the main rival of Alexandr Lukashenka in 1994 presidential elections. In 1990s Lukashenka even promised to imprison him for corruption. But after being elected, the first president changed his mind and started to cooperate with him.

Having worked as the head of the Presidential Administration in 1990s and the National Academy of Science in 2000s, Myasnikovich became the Prime Minister of Belarus in December 2010. Many regard him as the shrewd and unsinkable leader of the Belarusian bureaucracy who is able to significantly influence the situation in the country.

60-year old Myasnikovich comes from a village in Nyasvizh District, a hundred kilometres to the south-west of Minsk. He has graduated from Brest Civil Engineering Institute, and later completed advanced studies at Minsk High Party School.

His biography lacks heroic accomplishments. In 1970s, engineer Myasnikovich worked in water supply and municipal services in Minsk. In 1980s, he made a good carrier in the Minsk Soviets. In those times, Soviets – councils – formally had significant authority but in practise were just an instrument used by Communist Party to legitimise its rule.

In mid-1980s, Myasnikovich became a Secretary of Minsk City Committee of the Communist Party of Belarus in charge of running the capital. Until the collapse of the Soviet Union, Myasnikovich served as the Minister of Housing and Public Utilities and the head of the State Committee for Economy and Planning.

Working For Kebich and then Lukashenka 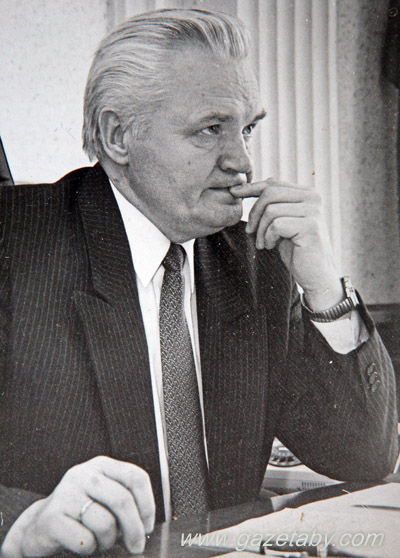 In 1991, Myasnikovich becomes Deputy Prime Minister of Soviet Belarus, soon to become independent Belarus. He was a prominent official in the government of Vyachaslau Kebich, and was allegedly in charge of his boss' highly controversial deals. When then a little-known member of Belarusian Parliament Alexander Lukashenka launched his anti-corruption campaign, he lashed out at Myasnikovich as one of the most corrupt government members. Myasnikovich then led Kebich's presidential campaign, some say – rather reluctantly.

After election Lukashenka decided to employ cadres of his predecessor Kebich. Myasnikovich got his job back, and then continued his rise to power as head of powerful Presidential Administration – the key decision-making body of the regime. He was apparently rewarded. Late Vital Silicki argued that Myasnikovich was a leader of old Kebich-time nomenclature. Led by Mikhail Myasnikovich the nomenclature swiftly switched its loyalties to Lukashenka.

In late 1990s, Lukashenka established and consolidated his regime, destroying fragile democratic institutions, parties, media and civil society. Myasnikovich has displayed no liberalism while serving as a top official in those years. At that time such public figures as former National Bank head Bahdankievich or Prime Minister Mikhail Chyhir protested against Lukashenka's policies and lost their offices. Moreover, Myasnikovich actively participated in a successful constitutional coup in November 1996 as a major figure.

However, after the 2001 presidential elections Myasnikovich landed in a marginal position as the head of the National Academy of Sciences. Lukashenka might have had good reasons to sideline him. Too many people spoke about the leader of the nomenclature as a possible presidential candidate capable of removing Lukashenka. He himself displayed no ambitions but Belrusian media published unconfirmed documents on alleged investigation of a conspiracy against the president which involved Myasnikovich.

In his decade long exile in the Academy of Sciences Myasnikovich achieved controversial results. He directed institutes of the Academy to undertake production activities and appointed people without scholarly credentials to run these institutes. But even the highly critical of the regime Radio of Liberty admitted that Myasnikovich made the management system of the Academy more professional, bringing in qualified administrators. Remarkably, he stayed rather humble and became a correspondent member of the Academy only in 2009.

Being bureaucratic carrier did not prevent Myasnikovich from making money. In 2006, the United Civic Party re-published the list of 50 richest men in Belarus. Myasnikovich was among them with US$296 million.

The Brain of Belarusian Government 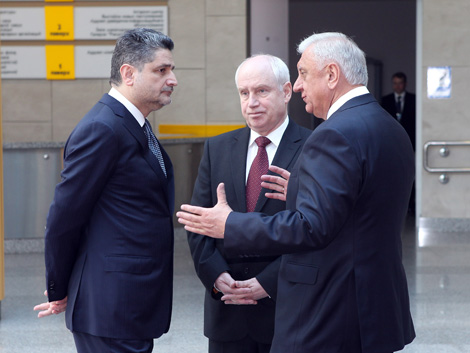 Hardly anyone expected that Myasnikovich would pursue new economic policies after he became Prime Minister in 2010. Many years ago he was considered to be a cautious supporter of market reforms. Former National Bank director Stanislau Bahdankevich, however, points out controversy in the views of Myasnikovich. "I think, he understands the necessity of some market reforms, but I do not see that Myasnikovich profoundly believes in them.”

Most commentators emphasised that he is just a good administrator of the old school. “He is very strict and precise, always controlling decisions taken and their implementation,” says the former chairman of the National Bank ​Stanislau Bahdankievich.

Being in the government he retained some of his critical mindset and scholarly ambitions. In 1994, he defended his doctorate on “Emergence of Market Economy in Belarus: Conditions and Factors." In late 1990s, he defended another research degree on "Formation of Financial Industrial Groups in Transit Economies (The cases of Belarus and Russia)." Both texts were published – something unusual for nomenclature scholars who usually hide their writings.

In 2004, Myasnikovich published one more book on innovations in Belarusian economy in which he criticised many aspects of Soviet economic and administrative system. He also demonstrates familiarity with key Western authors writing on the topic. In addition, he reportedly has some command of English – a rarity among Belarusian officials.

​But Myasnikovich also likes to pay tribute to old thinking as well. He hinted that the Chinese way would be a better model compared to the Soviet model.

Nevertheless, in 2007 – well before the current crisis, he criticised the Belarusian economic model. The Head of National Academy of Sciences declared his belief that the industrial policy of the government has no prospects and the economy should be technologically modernised.

There is also another interesting feature of his character. Myasnikovich does not demonise people if they change over to the opposition. He phoned the family of late Hienadz Karpienka – a major opponent of Lukashenka – after Karpienka's death in 1999. He attended the funeral of dissident writer Vasil Bykau in 2003. In June 2011, Myasnikovich consulted with an oppositional politician Bahdankievich and even offered him a job.

Sviatlana Kalinkina, chief editor of the Narodnaya Volya daily notes that Myasnikovich is a “dove” looking for compromises. She explained his survival in politics through three unique features. He has links and networks among the nomenclature, good contacts in Russia, and he is a good negotiator. Now, as a prime minister he shall be a counterweight to the group of officials from security agencies led among others by Viktar Lukashenka.

No wonder, when last autumn the Prime Minister used harsh words to attack presidential aide on economy issues. Another member of his cabinet called the situation in the country a “shame”, new rumours about disloyalty of nomenclature and Mikhail Myasnikovich emerged. Yury Drakakhrust even said about “uprising of the Government against Presidential Administration”.

The uprising never materialised, yet undoubtedly one of the ways to achieve changes in Belarus is to deal with the bureaucracy and their robust and shrewd leader. Mikhail Myasnikovich alone can persuade Lukashenka to change his ways much easier than all the opposition put together. He is the grand vizier in Lukashenka's state.

Myasnikovich embodies both the traps and opportunities related to the Belarusian bureaucracy. He is cautious with everything new and lacks his own initiative but still remains a rather effective manager. He, as the rest of the bureaucracy, does not really have a vision of his own and leans on Moscow but could become a partner for the West.

Diplomatic scandal with the European Union, political prisoners and economic sanctions remain in the focus of attention of Belarusian analysts. Other topics include the effect of Putin's election as president in Russia, the state of the legal profession in Belarus, and a review of human rights violations in February 2012.

Why doesn't Lukashenka Release Political Prisoners? – The Warsaw-based Solidarity with Belarus Information Office's analysts note that “the release of political prisoners in exchange for ending of the conflict with the EU is perceived by Minsk as a very bad deal”. Firstly, it brings no economic benefits for the country. Secondly, the Belarusian elite, raised by Alexander Lukashenka, will certainly perceive such a move as a weakness of the President.

“And the Winner Is…”: Belarus and European Union Recall Each Other’s Ambassadors – Vladimir Socor considers that “the mutual recall of ambassadors deepens the gulf between the EU and its immediate neighbour in Central Europe, Belarus. It is a gift of unexpected magnitude to Vladimir Putin’s Eurasian bloc-building strategy.” He concludes that unless the situation deescalates, the Kremlin will be the main beneficiary of the diplomatic scandal between Belarus and the European Union.

Deadline for Lukashenka, or why the European Ambassadors Left – Andrei Eliseev analyses the development of the current diplomatic conflict between the EU and Belarus, as well as the history of the withdrawal of ambassadors in previous periods. The expert believes that "the EU will continue to insist on their position: first, the release of political prisoners – and then resuming fully-fledged dialogue and a partial freeze of sanctions".

If the EU Sanctions Work: an Analysis of the Arguments – Andrei Eliseev describes the history of relations between the EU with Belarus and shows that EU sanctions have consistently worked well – either fully or partially. The expert examines the arguments of opponents of sanctions and concludes that "the EU sanctions in the Belarusian case may not be as unjustifiable, dangerous and hopeless as it seems to their critics".

Trying to Live with Lukashenka – The Economist recounts the meeting of a group of Belarusian political scholars and civil-society activists with representatives of the Polish foreign ministry and the embassies of the US, Canada and several EU members (5 March, Warsaw). The Economist notes that while many Belarusian activists were calling for the EU to ditch confrontation in favour of support for civil society, several European officials ruled out any changes in their visa policy.

Dmitry Karpievich: "Belarusians are Interested in what's Happening in the EU" – Chairman of the Education Center POST Dmitry Karpievich in his interview for Novaya Europa discusses whether there is interest in a  European theme among teachers and pupils, as well as what issues civil educators face in solving the complex "European problem" in Belarusian conditions. The theme of European integration and the way of life attracts considerable interest in Belarus, but there are many barriers which prevent Belarusians from getting information about the European Union without stereotypes.

Results of Elections in Russia: Implications for Belarus – George Plaschinsky notes that the election of Putin means further integration of Belarus in the format of the Common Economic Space. Russia's membership in the WTO is likely to contribute to "forced modernization" of the Belarusian economy. Russia is likely to continue subsidising the Belarusian economy but will be more assertive in seeking more in return, particularly privatisation of state property.

Analytical Review: February 2012 – The Belarus National Security Blog has released its regular analytical review for February 2012. The authors note that the events of February will largely be of decisive importance for the further development of Belarus. In particular, in the country signs of degradation of the state mechanism have been clearly delineated for the first time, and the diplomatic conflict with the West will have far-reaching consequences, not only in politics but also in finance.