Belarusian president Aliaksandr Lukashenka’s role as a mediator in the conflict in Ukraine has received high praise from European officials and partially ended the isolation of the republic. Recently the government has taken part in several high-level events, most... 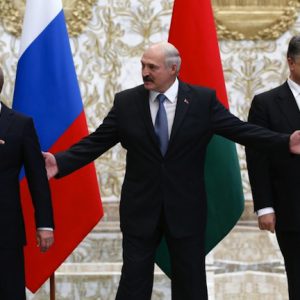 Myths of Chinese Engagement in Belarus: No Money Between Friends? 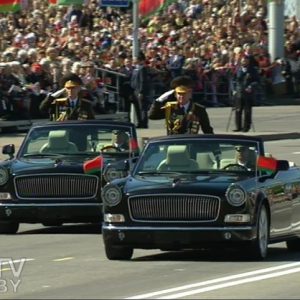 Last Thursday, Chinese workers in the Homel Province of Belarus broke out in a protest over wage arrears. The labour conflict went public and was yet another sign of growing Chinese activity in Belarus. The protest, unusual for Belarus, left an impression locally with one thousand Chinese working to construct a board factory in a Belarusian town with a population of only 20,000 people.

The official version likewise seems to reflect increasing Chinese involvement in Belarus. Symbolically, at the latest military parade held in Belarus, officials drove around limousines gifted to Minsk by the Chinese government.

Belarusian officials and the state media have been talking about a pending influx of Chinese money for years, yet so far Chinese projects in Belarus have failed to leave much of an impression. While the Belarusian leadership considers its relations with China a strategic move, Beijing has little objective interest in Minsk.

Squeezed between Russia and the West, the current Belarusian leadership as far back as the mid-1990s decided to develop a third strategic direction for its foreign policy – improved relations with Communist China. While Minsk has generally tried to develop relations with what at times seems like every potential partner in the developing world, it has done so mainly in an opportunistic manner.

Not so with Beijing. In the political arena, Alyaksandr Lukashenka's government has dropped contact with Taiwan and even issued regular statements denoting its political support for China. The Belarusian head of state has never hidden his belief in a future where China would become even more powerful and change the balance of power in the world. He looks onto a future where not Russia but China becomes a safeguard against Western pressure.

Economically, Minsk has tried to lure in Chinese investment for strategic reasons. Thus, Minsk has allegedly fought to convince China to participate in the privatisation of Belaruskali, the national potash company. Belarus has also pursued military industrial cooperation with China, even reportedly signing agreements that would see them co-design missile systems. The first results of this deal – the multiple rocket launcher Palanez system – was already put on display in Minsk this May.

Microwaves and Chassis for Chinese Missiles

China's presence in the Belarusian economy is visible but remains rather limited. The major projects include manufacturing home appliances such as microwaves at “Midea-Haryzont”, a project which opened its doors in 2008 and a much much publicised project in the automotive industry. In 2011, the Belarusian Ministry of Industry signed a contract with Chinese company Zhejiang Geely Holding Group to produce Geely cars just outside of Minsk, with the Belarusian side holding a controlling share in the BelGee joint venture.

Cooperation in the military industrial domain has shown somewhat contradictory results. In 1997, the Minsk Tractor Factory (MZKT) and Hubei Sanjiang Space Wanshan Special Vehicle Co. established a joint venture in China to manufacture heavy-duty trucks and chassis. Sometime in the late 2000s this enterprise was apparently shut down. The reasons for its closure are not clear according to military analyst Alyaksandr Alesin who was referring to unspecified sources that stated that the Chinese were attempting to copy the Belarusian-produced parts, make them on their own, and finally get rid of the Belarusians altogether.

In 2009, the same partners established a joint venture in Belarus with a more limited profile: manufacturing hydromechanical transmissions for trucks and tractors. Its official initial capital was $22.2m with each partner controlling equal shares.

Arguably, the most strategically important company among all Chinese firms in Belarus is the Huawei Technology company. It founded a subsidiary enterprise in Belarus back in 2007 and has since conquered 50% of the Belarusian telecommunication market with annual receipts exceeding $100m. That Huawei enjoys good standing in Belarus can easily be determined by just taking a look at its deputy general director Kiryl Rudy, who in 2013 became Lukashenka's advisor on economic issues.

Likely in an attempt to give new impetus to bilateral relations, Belarusian officials launched their next project, one with serious ambitions. In 2010, the Belarusian Ministry of Economy and the Chinese Engineering Corporation CAMC agreed to create a Chinese-Belarusian Industrial Park in Belarus. One of the initiators of the project, Kiryl Rudy, declared in 2014 that, “the Park should function like an incubator to help create and grow new industries in the country, which will quickly develop and gradually replace old branches”.

Though the park has attracted some promising residents (like the Chinese telecommunications giant ZTE) Minsk still faces the arduous task of establishing it properly. As such, the government has adopted a catch-all strategy and, recently invited several Pakistani garment and textile firms to the Park. While the clothing and textile industry can hardly qualify in Belarus as “new industries", this approach suggests that the park so far failed to bring really innovative production lines to Belarus.

Direct Investment from China: Less Than 1% of the Total

Belarusian officials rarely criticise the meagre results of the country's cooperation with China. However, last year then Prime Minister Mikhail Myasnikovich, speaking to the China Daily, emphasised that despite many rounds of talks on strategic partnership, little has thus far materialised. He noted that out of $50bn of foreign direct investments which Belarus had attracted so far, only $195m came from China.

For the sake of comparison, over 2005-2010 Chinese direct investment in Hungary (comparable to Belarus in the size of its population) attracted $466m. On the other hand, Myasnikovich's predecessor as Prime Minister, Siarhei Sidorski openly criticised the quality of Chinese equipment being bought on Chinese loans.

Tactically, Minsk can benefit from its partnership with Beijing, as for example in the case of MZKT which resisted a Russian takeover by using its cooperation with China as leverage. Still, strategically, ts orientation towards China so far displayed limited results.

Demonstrative political support for Beijing cannot be a substitute for a state policy that creates the necessary conditions for modernising the economy. It requires modern infrastructure, efficient state institutions and a strong legal framework.