German Press on Election Fraud and Repressions in Belarus 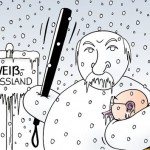 Unknown to most Germans, Belarus only pops up in their consciousness during the elections in the country. This is also due to the fact that German reporters cover events in...

Unknown to most Germans, Belarus only pops up in their consciousness during the elections in the country. This is also due to the fact that German reporters cover events in Minsk from Moscow or Warsaw, which is why articles appear rarely and show a lack of understanding for what is going on in Belarus.

Despite the fact that a visit of the journalists of the leading German mass media to Belarus upon the invitation by president Lukashenka took place in November, the real media coverage on the elections started immediately before December 19th.

Major national newspapers such as the centre-leftist daily Sueddeutsche Zeitung and the conservative Frankfurter Allgemeine Zeitung (FAZ) published articles in the run-up to the elections which focused on the role of Russia and the recent conclusion of the oil supply agreement. On December 18th, the FAZ Russia-correspondent Michael Ludwig wrote:

Next Sunday, the Belarusians are going to elect their president – who will be the incumbent, of course. As his opponents are divided, he could even allow a slight degree of liberalization. What counts in the end, however, are the Russian oil and the proven methods of manipulation.

On December 20th, all big German newspapers (regional and national) reported on the crackdown of the demonstration that took place in Minsk on Sunday evening with follow up articles continuing to appear until one week later.

The overall opinion of German media was that the violence against protesters was disproportionate. Most newspapers reported that those storming the building where likely to be government-paid agitators, while the leftist daily Die Tageszeitung wrote: “Furious opponents of Lukashenka tried to storm the government building on Sunday”.

The regional newspaper Neue Osnabrücker Zeitung and Der Spiegel, the most important German weekly, published interviews with the OSCE election observer and German Member of Parliament Georg Schirmbeck (CDU), which were much discussed. In particular, Schirmbeck was quoted saying: „I am very sorry to say that I cannot confirm the reproaches of the opposition that the elections were manipulated by Lukashenko.”

On December 22th, Die Zeit wrote in an article titled “Europe has failed”:

The strategy of the EU has failed with this election at the latest. Lately, the EU had tried to lure Europe’s last despot to democratize his country by making him several offers. (…) Three billion Euros would have been offered to Belarus if the elections had not been manipulated as the Polish Minister of Foreign Affairs Sikorski assured the authoritarian head of state during his visit together with Westerwelle. The reaction of the young Belarusian civic movement to this absurd offer of the Europeans to the despot was alienation. Instead of seeking the direct conversation with Lukashenko, the EU should rather strive to give more support to the civil society in the country. The election evening also showed the tragedy of a generation that feels as a part of Europe but at the same time abandoned by it.

Sueddeutsche Zeitung, Frankfurter Allgemeine Zeitung and the German weekly Die Zeit put the emphasis of their reporting on the election fraud and the mass arrests of opposition activists and protesters. The German minister of foreign affairs reacted wish harsh critique to the crackdown of the opposition. Die Zeit and Der Spiegel reported that the Belarusian Ambassador to Germany had been ordered to appear in the German MFA where he was told that the German government expected Belarus to immediately release all political prisoners and to start a dialogue with the opposition. Westerwelle made it clear that the authoritarian conduct of the regime would lead to an isolation of the country and that it could not be a partner of values for the EU.

One week after the elections, the German press is still following closely what is happening in Minsk and is considering how to deal with the authoritarian state at the doorstep of the European Union.

Der Spiegel, in its print edition on December 27th, wrote: "The Minsk dictator appears to be the president of the silent majority, which will continue tolerating him as long as it feels economic growth". Sueddeutsche Zeitung published an article by the German writer Ingo Petz who paints a dark picture of the intellectual and cultural scene in Belarus:

Blogs and websites which were working for a different, open Belarus with wit, hope, brain and verve till last Sunday, are now standing still as if their flow of life has been cut.

During the visit of the Green Member of Parliament, Marie-Luise Beck to Minsk on December 28th, she planned to meet Belarusian officials but the meeting was cancelled by the Belarusian side. She stressed that a maintained dialogue of the EU and Belarus will be better for Belarusian people than sanctions towards the country. Marie-Louise Beck notes that the EU will "give a powerful response to the events of the last 10 days in Belarus," but did not call the possible sanctions against the official Minsk. After this statement it remains unclear which strategy the German government will adopt with regard to sanctions against the Belarus authorities. 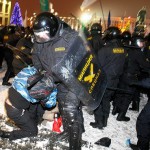 On the election day grim news of violence on Minsk’s Independence Square appeared in all major US newspapers. The media invariably used an appositive “post-Soviet state” and many papers reprinted stories by The Associated Press.

As expected, conservative news sources contained more biting criticism of the authoritarian state and proposed to punish Minsk with sanctions. The more liberal papers, which also criticized the crackdown, stressed the need for support for the country’s weak civil society and the opposition.

According to the country profile in The New York Times (center/liberal), Belarus is “torn between a desire for the freedoms and prosperity of the West and the authoritarian traditions of its larger neighbor to the east.” Interestingly, the newspaper views the brutal suppression of the protest on the election night as a blow to the European Union, but not the United States.

On December 23, The New York Times published op-ed "Lukashenko the Loser" authored by several European foreign ministers, who wrote that Lukashenka’s “vote-rigging and outright repression makes what Milosevic tried to do in Serbia in 2000 pale in comparison.” They conclude that “Europe must not be mute.”

Notably, among those beaten on the night of Dec. 19 were The New York Times’ reporter and a photographer. Even so, the dateline of the first version of its article “After Belarus Vote, Riot Police Attack Protesters” read “Minsk, Russia.”

The Washington Post (center/conservative) had a separate article about the travails of Vladimir Neklyayev’s wife. The Post also commented on the consequences faced by jailed protesters, many of whom were fired from their jobs. On Dec. 20, The Washington Post published editorial "A backfire in Belarus," which stressed the brutality of Belarus security forces and called on the Western governments to ensure that Lukashenka “pays a price for his behavior.”

Unfortunately, the editorial hardly offered a workable approach to Belarus: while reinstating and strengthening sanctions against the Belarusian president and key associates is a reasonable punishment, it is hardly enough to induce positive change in Belarus. The editorial is somewhat naive offering to democrtatize Belarus using Russia:

The episode may also offer President Obama a chance to explore whether the "reset" of U.S.-Russian relations can be extended to Belarus. For its own reasons, the Kremlin despises Mr. Lukashenko [sic], and the Russian media it controls have cynically campaigned for the opposition. This would be a good time to challenge the government of Vladimir Putin to give up its imperialist ambitions in the region and cooperate in isolating a regime that is overdue for change.

Liberal TIME published photos of the Dec. 19 crackdown and used Lukashenka’s assessment of the election as its quote of the day: “Openness and transparency were so high that people mistook these elections for a reality show.” According to December 20 article "The Moscow Power Games Behind Belarus' Election Crackdown" by Simon Shuster, Lukashenka’s game changed on December 4, when “he signaled to Moscow that he was serious about yielding to the West” and then “the change that flickered on Belarussian [sic] TV screens on December 4 has taken only a couple of weeks — and a brief set of talks in Moscow — to fade away.”

Earlier this month, TIME published substantive article "Where Tyranny Rules" by Yuri Zarakhovich, which described the fate of Nikolai Statkevich, who ran for president in 2001 and asserted that “at least 4,000 citizens have been imprisoned on political charges” in Belarus. The article concludes that “as long as Lukashenko is President, real freedom will remain elusive.”

In assessing the scale of repression, most US papers refer to the data provided by Belarus’ human rights organization Vyasna. The newspapers also frequently quote the joint statement by US State Secretary Hillary Clinton and EU High Representative for Foreign Affairs and Security Policy Catherine Ashton.

According to the official US statement on Presidential Election in Belarus, “The United States cannot accept as legitimate the results of the presidential election.” However, Washington is still hoping to “engage the government, the political opposition, and civil society to promote progress for the sake of the Belarusian people and their democratic aspirations [emphasis added].”

Unlike Polish press, the US media are often naive about the role which Russia can play in Belarus. They neglect the fact that further isolation of Belarus will make Mr Lukashenka more dependent upon Russia. Not surprising, President Medvedev was the only G8 leader who congratulated Mr Lukashenka with his victory. Overall, the level of attention to Belarus problems in the US press has been surprisingly low despite unprecedented post-election repressions.