Last autumn when Belarusian rock band IQ48 approached a regional TV channel, its editors told the musicians that their song contained unacceptable political hints. The editors in western Belarusian city of Maladzechna interpreted the original Belarusian words of the song “And let Mickey... 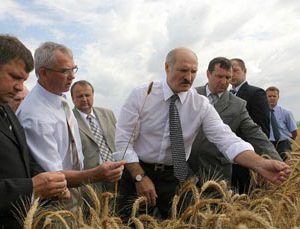 Last autumn when Belarusian rock band IQ48 approached a regional TV channel, its editors told the musicians that their song contained unacceptable political hints. The editors in western Belarusian city of Maladzechna interpreted the original Belarusian words of the song “And let Mickey Mouse hang in the fridge” as a hint to the Belarus president who is a known as an avid hockey player and promoter of dozens of ice hockey palaces throughout the country.

The careful editors also understood “and year to year we become ever more slim like birch trees” as a hint that there was not enough food in the country, so the Belarusians were getting thin. That was enough for ideological supervisors to ban the song, silencing the band as since some years all public concerts and broadcasting in Belarus are controlled by the state. Some could dismiss the Maladzechna incident as stupidity of provincial censors but there further examples show that the regime's paranoia is increasing.

Law as a Joke

When the Justice Ministry and other state agencies deny registration to new non-governmental organizations their justifications sound no less amazing.

Following the 2010 amendments to the Law on NGOs, every tiny mistake or incorrectness in the documents has become a ground to deny registration. NGO's lawyer Yury Chavusau recently shared on “Nashe Mnenie” website  some of the reasons given by state agencies to deny registration:

Kafkaesque reality of the present-day Belarus culminates in Lukashenka's own behavior. Belarusian leader seriously fears for his life despite the fact, that so far no attempt has ever been made on it. The security measures taken on all his movements in Belarus are spectacular.

The whole nation knows that Lukashenka's visit is a big problem for the local population. First, the police and KGB will temporarily detain or remove on some pretexts all local opposition activists. Second, the entire local population will be effectively incarcerated to their houses and neighborhoods during the visit. And woe to anyone who lives along his route – to come to the windows and to open them while the president is passing is strictly prohibited. The snipers will be on the roofs, police in courtyards in even remote blocks of flats. The schools will be closed and emptied of children to provide shelter for hordes of special police forces brought to prevent protests.

These security measures led to innumerable jokes. For good reason. When Lukashenka wanted to travel through Slonim to another Belarusian town, the local authorities ordered the administrative staff at a weaving plant to put aside their work and remove certain yellow wild flowers along the road because they thought they did not look good enough.

Painting the Crops and Killing the Flies

In December 2011, before Lukashenka's visit, the local authorities of Ivacevichy in Brest region were ordered to kill all pigeons to make the town look nicer. The Belarusian ruler was going to visit the “Ice Palace” and all schools of the town had to provide pupils to fill all the seats of the large sport facility. Of course, the lessons had been canceled and teachers had to force children to go to the ice hockey palace.

Lukashenka who used to be a collective farm director loves visiting the country side. Last July, he decided to visit Pastavy in northern Belarus. Oppositional Charter-97 has published a document of local administration on preparation for the visit. He planned to visit some cattle farms among other objects. In the leaked plan among other most urgent tasks to be done, the local authorities ordered repairmen of 2.5 ha of maize”, “treatment of horns, hooves and tails, cleaning of cows”, “liquidation of flies and removal of adverse smells”, “removal of white-headed calves to other farms” etc. Among other weird actions was to urgently plow empty areas (in July!) and remove – although with compensation for owners –  crops from private fields.

Local officials explained to the European Radio for Belarus why they had to combat flies and their reasons for removal of white-headed calves. Apparently, the farm's specialty was to work with certain high-quality cattle and white-headed animals did not belong to this category. Therefore in order to prove Lukashenka the success of cattle breeding in the region non-qualifying animals had to be hidden. A few days later, the official Belarusian media reported of a 'sudden visit' to the farms already described in the leaked document published by Charter-97.

Other regions of Belarus saw similar things happening.  Prior to another visit of Lukashenka to Maladzechna the staff of a local agricultural school had to 'repair' a rape seed field on president's route. The clerks had to choose the most yellow plants from the middle of the field and put them along the road to make it look nice. If they did not look yellow enough – they had to paint the plants. Rumors from other areas suggested that treatment of cattle hooves also included painting.

The closed state system of Belarus and Lukashenka's dictatorship is more than just ineffective and abusive.  It degenerates to outward nonsense. The cases of ridiculous measures are abundant and many of them became so normal to Belarusians that they are no longer surprised. Outward lies about sudden visits seems harmless compared to much more serious human right abuses and falsifications. The essence of every dictatorship is lie, often a very ridiculous lie.

Lost in Translation in Minsk – The “Real Belarus” Travel Tips 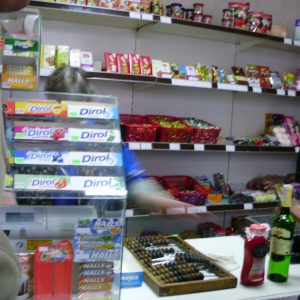 Last week, leading Belarusian newspaper Nasha Niva announced that in Minsk there will be signposts put up in English and in Russian. This reveals several facts about contemporary Minsk. There are no signposts in English. Putting them up is so extraordinary that they publish an article about it.

If you have traveled around Minsk without speaking Russian and reading Cyrillic, you will understand why. Apart from one road sign in the Western suburb of Minsk announcing the way to “Inturist”, there are no street names or metro stations in Latin script. Only in the newly renovated park around Komsomolskae ozero will you find signs indicating the way to "Youth Island" and other promising places in English.

For a Western visitor, it means that you will need either a photographic memory or a good interpreter to get around in Minsk. Upon arrival, you may buy an English-language map of Minsk.  But it will not help much, as the names indicated in English on your map will be hard to compare with the Cyrillic writing on the road signs and metro stations.

Even if you can speak or read some Russian, you will notice that this is the language most people speak in the streets but not the one used for road signs. They are in Belarusian, and Belarusians think it is very funny if a foreigner does not understand that if he is supposed to meet somebody at “Oktyabrskaya” station he actually has to get out when “Kastrychnickaya” is announced in the metro. Both words mean the same, but one is Russian, the other is Belarusian. 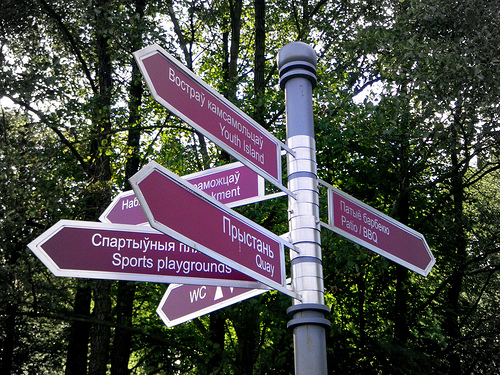 Don’t Take Your Granny or Your Baby with You

You will be able to use your Russian in those shops that still have no self-service and where you need to ask the salesperson to give you what you want. A few years ago, there were many such shops in Minsk. Today, most shops in the city centre are supermarkets but you can still find the corner shops and they are pervasive in the countryside.

So do not be frustrated when shop assistants pretend not to understand the language you are speaking (even if you are quite sure it is Russian). They are not used to hearing foreign accents. And, of course, they do not speak English or any other Western language. Some will think that you are not speaking proper Russian in order to annoy them.

No matter what you are planning to do in Minsk, make sure you do not have a wheelchair or buggy with you. Minsk is absolutely not barrier-free. It is impossible to access most shops and almost all means of public transport. Even if  you can get on the metro in Uruchie you cannot leave it in any other station because there are no lifts or even ramps. This shows that disabled or the elderly do not have wheelchairs or are not moving around in Minsk. Moreover, young mothers with babies in buggies are supposed to stay at home and should not go shopping or travel by metro.

Be Sure to Check Out Minsk Metro

The Minsk metro is quite impressive. Most people are amazed to see that the country reported to be on the edge of bankruptcy has large flat screens at many of its metro stations (and has had them for several years now). Every station is designed and decorated according to a specific theme: Lenin, Proletarian Revolution, Sports, etc. Minsk metro is clean, efficient and very speedy. When riding it for the first time make sure you have a seat or a stack to hold on to, otherwise you will fall down. With time, you will learn to keep your balance and “surf” like Minskers do. 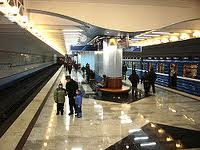 But of course it's not this efficiency that put the metro on the front pages of the world media last year, but the bomb explosion . Although the two young men allegedly responsible for the blast that caused the death of 15 people on April 11 2011 have been sentenced to death, many in Belarus still believe that behind the bombing were the Belarusian security services.

Many people had a strange feeling when going by metro for the first time after the explosion, and the bored police agents that pretended to look into your bags and backpacks in order to prevent you from bringing more bombs to the metro did not make anyone feel safer.

But normality soon returned, and going by metro is now once again a usual part of everyday life; the only thing to remind you of what happened is that they have removed the benches on the platform so that no more bombs can be hidden below them (and no more people can have a rest when waiting for their train). Only at some stations were the benches back at the end of the last year.

If you get the impression that Minsk is a city for young, healthy russophones, you are right. So far, it is impossible to be lost in translation as there are no translations into English. The Minsk Tourist Information Center still has not decided whether to put up signs in Russian or Belarusian or English. Putting them up in English would bring Minsk a step closer to being an international capital and would make it seem a lot more welcoming to foreigners.

So, our three survival hints for this week:

First, make sure you have a Belarusian friend or colleague to show you around. Treat him or her well, otherwise you might get really lost without reading Cyrillic.

Second, if you have to go by metro, count how many stations you have to go. Do not try to understand what the voice in the train announces unless you are a fluent Belarusian speaker.

Third, if you are hungry or thirsty and you do not speak Russian or Belarusian, stick to shops like Zentralny (next to McDonald’s in the centre) or Evropeiski (next to Porsche centre in the east of the city). There you can get what you want yourself and then pay for it without having to explain anything.