Lukashenka in the Russian Hands

The worst nightmare of the Belarusian regime is a serious confrontation with Russia and the West at the same time if both parties agreed to the removal of Lukashenka. Of course, this scenario is hard to imagine but it... 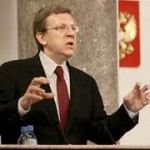 The worst nightmare of the Belarusian regime is a serious confrontation with Russia and the West at the same time if both parties agreed to the removal of Lukashenka. Of course, this scenario is hard to imagine but it is equally difficult to imagine such change without coordination between these stakeholders. The internal opposition is nearly crushed in Belarus but public dissatisfaction with Lukashenka’s rule is widespread in Belarusian society as never before.

The game is between Lukashenka, Russia and the West, with organized opposition as a minor player, often used as a whipping boy. The Friday news came as a threat to Minsk that its nightmare can materialize. Russia, together with the IMF, is willing to help Belarus’ struggling Belarus economy, but only if the Belarusian government will continue reforms, said Russian finance minister Alexei Kudrin on Friday at the forum on US-Russian relations in Washington.

Kudrin’s statement demonstrated that Lukashenka cannot count on unconditional support from Moscow or, perhaps, anyone at all. Much worse, Moscow recently showed that it agreed with the West even on such international ‘hot cases’ such as Libya. As Russia and China left Qaddafi without their protection, Belarusian state media were outraged that the Chinese and Russians ignored the fate of their long-standing partner. Though there are few reasons to compare Lukashenka’s rule with the rule of Qaddafi, it became clear that Lukashenka could not rely on his foreign allies anymore.At the moment, the Russian government – more firmly than ever – is holding the Belarusian regime in its hands. It deprived Belarus of its long-time lucrative business of reprocessing cheap Russian crude oil for sale of refined oil products in the West. Taking away this source of profit from Lukashenka, Moscow ruined the whole political economy of Belarusian regime. How exactly important it is, is the subject of a recent admission by Belarusian economist Georgi Gryts. According to him, about half of all Belarus’ exports are generated from by just three sources – oil, potash and black metals.

In accordance with the new arrangements on oil, Belarusians no longer be able to ear big money on refining and reselling Russian oil because a significant share of the profits now go straight into Russian pockets. After Russia introduced these arrangements, the question of an economic crisis for Belarusian regime became only a matter of time. The hard currency reserves of Belarusian National Bank diminished month by month.

The panic finally gripped the Belarusian population watching such developments as they continue to expect a new devaluation of the national currency. Losing its economic foundation, the Belarusian government could only turn to Russia for new loans. The West was not an option following post-election accusations against some Western countries through Belarus’ propaganda and the arrogant political line taken by the Foreign Ministry of Belarus supporting Qaddafi. When in mid-March Russian Prime Minister Putin visited Minsk, the most important issue on the table were new loans to Belarus.

It seemed settled that Lukashenka would get ca. USD 13 billion: 6 billion for a nuclear power plant, 2 billion from Anti-crisis Fund of the Eurasian Economic Union (EurAzES), one billion dollars as in credit from the Russian government and USD 4.3 billion in the form of oil subsidies. Yet something went terribly wrong for Minsk and now Lukashenka is being pressured to make reforms and threatened to be deprived of the promised money. The situation could hardly be worse. The brutal crackdown which followed the presidential elections on December 19th and the terrorist attack of April 11th shocked the nation. People are now hunting for dollars and euros and buying up as much food, commodity products and cars as they can, quite reasonably expecting them to get much more expensive.

The measures taken by Belarus’ government so far have proven futile. It is no wonder that the Belarusian leadership once again recently compared Belarus to a besieged fortress penetrated by enemies. Even before the presidential elections we expected them to pressure us, while purposefully and methodically destabilizing the situation. It came true – first on the foreign currency market, then on the food market, and after that an explosion happened in the underground. A long single chain.

Lukashenka continues to denounce those “who do not like our [public] stability and tranquility”. In another statement he instructed investigators to interrogate opposition activists who expressed their views on the terrorist attack. Such conspiracy thinking, however, shows the desperation and inability to seek rational solutions. After all, the current problem that Belarus produces less than it consumes cannot be overcome by a public hate campaign.

The only solution is to carry out serious reforms and modernize the Belarusian economy to make it produce more. Towards that end, foreign currency is indispensable, and given the circumstances of rather an irrational confrontation with the West, large amounts of such money can come only from Russia.

Belarus After Sanctions: the Lost Dictator

The recent tragic events in Minsk returned Belarus to the headlines of Western media. Europe and the United States are struggling to adopt an effective policy towards the country – by reinventing the policy of sanctions, the relations of the West with Belarus in recent months returned to ground zero. Western pundits, rightly so, have mostly been critical of EU’s soft measures that are based on economic sanctions.

Even though the visa ban increased the number of blacklisted officials, it hardly seems to be a sufficiently tough response to the crackdown of December 19, which resulted in an increased number of political prisoners. Alexander Lukashenka raised the stakes with the brutal crackdown, and the West should equally respond respectively. In the meantime the West should finally learn how to support the Belarus’ beleaguered opposition but also that rely only on them in a country where most people work for the state, won’t be enough for democratic change. Moreover, it is still unclear what the exactrole/goal of part of the opposition on December 19 was?

If the West intends to change Belarus, serious “de-mythization” of it should first take place to choose the right policy, and most importantly to find the right formula of assistance strategy that would promote the European values as the alternative for the current state of Belarus. For that matter, the world should finally recognize that Belarus does not have a problem because it has Lukashenka, but it has Lukashenka because Belarus has a problem.

The new wave of revolutions in North Africa – Tunisia and Egypt – should not only urge the West to consider the need to increase democracy assistance, but also to think of ways of achieving “democratic” change that would lead to reforms. Learning from the post-Orange revolutionary Ukraine Europe should aim at changing Belarus, not only shooting at its leader. Considering the shockwave that swept through the entire society (not only the opposition) after the crackdown alongside the growing feeling of instability caused by inflation, severe budget deficit, and the forthcoming privatization process, the West should isolate or even ignore Lukashenka. Not having oil or gas to bargain with, he is “forced” to sell the only “commodity” he has – the image of the last dictator of Europe.

Lukashenka’s decision on post-election crackdown could be explained by cracks, clashes amongst different interest groups in the regime, a Russian (or other) plot, opposition provocation or simply by his own emotional decision to put an end to “this mindless democracy”. Instead of guessing, it is more important to notice that he has weakened his own position before the upcoming privatization process. This has the potential of becoming a game-changer. Obviously the regime will want to control the privatization process and they want to (and actually do) control the opposition. With a smart approach, the West may have a chance to isolate Lukashenka further from his own society and make the bureaucracy to reconsider the risk of having him in power for too long. If he is no longer able to provide concessions to pay for his regime, the door for other alternatives will be more open.

The Western press and policymakers, rightly so, are pushing for a tougher response. Without seriously considering economic sanctions the EU, once again, will remain the hostage of the opposition it supports. A new policy must finally acknowledge that Belarus provides a more complex challenge than it seems. It is not only about Lukashenka but about a society that approves and supports order and stability and does not mind a lack of freedom in return. To make Belarus embrace European values – such as leadership change through free and fair elections – the West needs to engage with all layers of society.

Most importantly, unless the West is able to expand its contacts and influence among Belarus’ most influential class, the bureaucrats, it will have little chance to pursue desired change of the system. Proving to the bureaucrats that the leader is no longer in position to deliver concessions from the West (and East) joined with aid programs
to the civil society, independent media, and re-building the opposition could spark the needed change in Belarusian leadership and society.

Let’s face it, finally, the real long-term challenge in Belarus is social and political change, not only regime change. The former would give us another Poland, the later – Ukraine.

Balázs is an Associate Fellow at FRIDE in Madrid, Spain. A longer paper on this topic is available at FRIDE.org.