Mediabarometer: Belarusian Opposition Needs to Do its Homework

At the end of October the Belarusian Institute for Strategic Studies (BISS) published a new issue of its Political Mediabarometer. It shows that many in the Belarus opposition seem to focus more on international activities and less on... 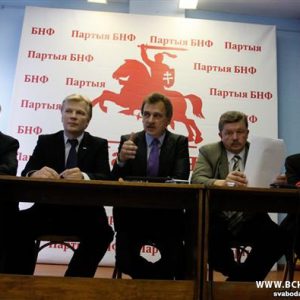 At the end of October the Belarusian Institute for Strategic Studies (BISS) published a new issue of its Political Mediabarometer. It shows that many in the Belarus opposition seem to focus more on international activities and less on work inside the country.

The Political Mediabarometer reflects public communications of Belarusian political parties and movements and their presence in Belarusian media and covers April-June 2013. According to the BISS' findings, the public campaign Tell the Truth, United Civic Party and the Party of the Belarusian People's Front appeared the most frequently in Belarusian media.

This media presence, however, does not lead to any serious level of public support even for the biggest parties or the most well-known politicians. The Belarusian opposition needs to fight for any publicity just to be recognised by the common people. Some of the new political forces – for example, the campaign Tell the Truth – manage to do it better.

Who is the Opposition?

Many opposition activists may become upset after reading the new BISS study done by Aliaksei Pikulik and Alena Artsiomenka. The number of politicians' mentions according to the BISS – dropped from 3,900 in January-March to 3,084 in April-June. This means that as a whole, the opponents of the current government became less visible in the public sphere.

Essentially, oppositional political forces often have to focus on, in the least, publicity before looking for new supporters. Moreover, according to Independent Institute of Socio-Economic and Political Studies (IISEPS)​, the level of trust in oppositional parties among Belarusians in March stood at 13.1%, while the level of distrust reached 60.1%.

The media paid more attention to those politicians who demonstrated more offline activities and communicated proactively, not only reacting to what others have done or said but taking the initiative themselves.

Anatol Liabedzka of the United Civic Party still leads the ranking of media presence, while the tendency towards a growing media presence for both Yanukevich and Milinkevich continues (at the end of 2012 the former was in 12th place and the latter 7th place).

In 2012, Liabedzka and a former presidential candidate Andrei Sannikau replaced each other at first place in the BISS ranking. In the first quarter of 2013, Sannikau found himself already at third place. And according to the study in April-June 2013 he fell even lower – to sixth place. In October 2012, he received political asylum in the UK, and as is often the case, physical absence rarely makes a politician more popular at home.

Tell the Truth traditionally leads the ranking of political forces which more or less corresponded with the ranking of their leaders. Absolute media presence rankings for the top-5 parties and movements remain higher than those of their individual representatives and it proves that they are more than “one-man-parties”.

They, however, remain very much concentrated on Minsk. The proportion of regional activists, according to the BISS study, had declined. The share of provincial party leaders and members anyway never reached a tangible level. Only Tell the Truth has a tangible share of alternative representatives who articulated political messages in the period screened by the BISS. In all cases, when the media mentioned the United Civic Party, PBNF, Christian Democrats, and For the Freedom, their reporting was related only to their leader (or leaders).

Only Young Front had a considerable share of coverage linked to their regional leaders, and the Conservative-Christian Party of the Belarusian People's Front – to a regional party member.

This means that politics involved the same circle of well-known faces. Unfortunately, the old politicians of the Belarusian opposition have limited popularity among the broader public. According to the IISEPS opinion survey conducted in March, support for Niakliaeu reached 5.1% and Milinkevich and Sannikau got only 2.8% each.

Along with regional activists, the share of women also declined. In the first quarter of 2013 four women, namely Iryna Khalip, Maryna Adamovich, Natallia Radzina and Nasta Dashkevich (Palazhanka) made it into the top-12 of the ranking. But later in the year only Maryna Adamovich, the wife of the incarcerated presidential candidate Mikola Statkevich, was still at the top.

Politicians and political forces over this period of time actively discussed a more balanced and diverse set of issues. In particular they focused more upon issues of international relations, domestic politics and social matters. Since April 2012, when BISS started this study, Belarusian politicians rather frequently talked about economics. The share of such statements doubled: previously it never exceeded 6-7 per cent, now it reached 15 per cent of all communications. It made the discourse of the opposition more interesting to common people.

The BISS experts named the events related to the communications of Belarusian political forces from April-June, although they did not study them per se. The study suggests that the Belarusian opposition pays more attention to international activities than to domestic problems, which are more important to common people.

Domestic events included Chernobyl Way, a traditional rally dedicated to the anniversary of Chernobyl catastrophe; and formation of political coalition People's Referendum (Narodny Referendum). Inside this coalition, Tell the Truth, For Freedom, the PBNF and BSDP declared that they would work together as strategic partners during the forthcoming local, presidential and parliamentary elections.

The international activities of opposition, on the other hand, were more impressive. In the second quarter of this year, its representatives participated in a conference on Belarus in Brussels held by the European People's Party, urged the EU to ease visa regime, hold a series of meeting in Lithuanian Seimas and addressed the Lithuanian Foreign Ministry about the conditions under which the EU could normalise relations with Belarus.

Yet international advocacy cannot substitute active political work inside the country. The study suggests that politicians proposed fewer new initiatives between April and June. Only Andrei Dzmitryeu (Tell the Truth) and Dzmitry Vus in this time span put forth any proposals. In general, the share of proactive communication – those when the politicians addressed publicity out of their own initiative – declined, while share of reactive communication responding to somebody else's actions or statements, grew to 85 per cent.

The structure of opposition and its activities are changing very slowly. An obvious maverick, the movement Tell the Truth demonstrate steady and vibrant activity. In less than five years it made it from zero to probably the most promising political force in an otherwise conservative Belarusian opposition. The political agenda of the movement looks rather flexible. So far, it simply takes on every local initiative it can find.

The Belarusian opposition has faced harsh suppression for years, an yet it still exists and is functioning. The new BISS study suggests that to become more visible in the domestic media and more popular among Belarusians, the opposition should spend less time doing international activities and work more inside Belarus, with its potential electorate.

Who is Happy in Belarus, State and Independent TV Compared – Digest of Belarusian Analytics

Sergey Drozdovskii, Coordinator of the Office for the Rights of People with Disabilities, explains why the Belarusian authorities hold back from signing the Convention on the Rights of Persons with Disabilities. Liberal Club presents a policy brief on the results of the recent sociological surveys regarding attitudes towards the public administration.

Numbers: Who is Happy in Belarus? – Elena Artyomenko, BISS, analyzes the report on women and children, developed jointly by the Ministry of Statistics and UNICEF. In particular, data on subjective well-being and the happiness of young people allows them to derive a formula of a happy Belarusian – to be happy, you have to be a young unmarried girl from a wealthy family from Minsk with a basic education. To feel satisfied with life, you need to be born in Brest in a well off family, do not receive secondary education and have experience with being married.

Censorship and Violation of Journalistic Standards on All Channels– The project mediakritika.by released its regular monitoring of news on state-run TV channels ONT and "Belarus 1" as well as the Warsaw-based "Belsat". The monitoring data for September shows that all three channels were characterized by violations of professional standards such as a balance of opinion, completeness of coverage, separating facts from opinions, reliability and timeliness. State TV did not mention the opposition at all and almost half of their air time was filled with positive stories about the president and government bodies.

Seviarynets on his Release, Spiritual Revolution and Isolation of Opposition from the People – The deep isolation of the opposition from the electorate cannot be compensated by a few and not too ambitious actions. The opposition will gain popularity only when its leaders show by personal example  how to live without lies and live according to a moral code. These and other issues are raised in the studio TUT.BY-TV by former political prisoner, Pavel Seviarynets.

BISS Political Mediabarometer (April-June 2013) – The Belarusian Institute for Strategic Studies (BISS) presents the fifth edition of its quarterly report covering April-June 2013. The report summarizes the half-year and contains information about the communication of political forces and its reflection in the media. In particular, among the positive trends experts point to the increased attention on the part of the media to the political forces with a higher level of offline activity and a greater proactive communications.

What do Belarusians think about the National System of Public Administration?– Vasily Korf, Liberal Club, has prepared a policy brief on the results of the recent sociological surveys. The expert uncovered that the data of both government (Information-Analytical Centre at the Presidential Administration) and independent (Independent Institute of Socio-Economic and Political Studies, IISEPS) centres indicate that not only tops officials, but also the ordinary Belarusians worry about the low efficiency of public administration in the country – "the majority of society does not feel its unity with the state, but rather opposes to it."

In Europe the Death Penalty was Abolished in Defiance of Public Opinion, Belarus has its Own Way (video) – In the studio of TUT.by-TV, an attitude of the Belarusians to capital punishment was discussed by Nikolai Samoseiko, MP, Grigory Vasilevich, a former attorney general, Valentin Stefanovich, a human rights activist of the campaign "Human rights defenders against the death penalty", and Oleg Gajdukevich, deputy chairperson of the Liberal Democratic Party.

Vytis Jurkonis: Lukashenka is a project of the Kremlin – The Eastern Partnership Summit in Vilnius will remind the official Minsk about obligations as the EU repeats from 19 December, 2010. The European Union has no illusions regarding Lukashenka. The current regime does not have a European perspective, as Lukashenka is a project of the Kremlin. These theses are articulated by a lecturer of the Institute of International Relations and Political Science of Vilnius University, Vytis Jurkonis during his interview about the current relationship between Belarus and Lithuania, between Minsk and the EU.

Andrei Yegorov: Civil Society in Belarus has a Low Temperature of Development – Despite its visible activity, Belarusian civil society is developing slowly. These are the results of a project that monitored civil society in Belarus, held by the Centre for European Transformation over the past two years. The project tracked the development of CSOs working in the field of democratic change, advocacy campaigns, protection of human rights, and an organisational development component as well. The presentation of the recent results of the monitoring was held on 8 October in Minsk.