Belarus-Russia relations Belarusian language Belarusian military travel to Belarus
Why Support Belarus Digest? Donate
BelarusDigest > All > Moscow Behind Us And Before Us – Digest of Belarusian Analytics

Moscow Behind Us And Before Us – Digest of Belarusian Analytics

Moscow Behind Us! And Before Us – political analyst Andrei Fedorov talks about the possible actions of Russia towards Belarus after the recent Russian presidential elections. Expert notes that the Belarusian government chooses economic subordination to Moscow as a lesser evil compared to the highly probable collapse of the economy. Fedorov warns that the officials in Minsk should take into account that this option certainly will lead to further significant limitations of its political power.

We have Already Passed The Point of No Return in the Relationship with the EU – Piotr Martsau, editor-in-chief of Belorusskaya Delovaya Gazeta, answers on questions of European Radio for Belarus: Why the West trusts neither the Belarusian government nor the opposition, Why EU’s position does not satisfy him, and What Lukashenka is waiting for.

Conflict with the EU: Lost in Translation – BISS analysts Alexei Pikulik and Dzianis Melyantsou analyse the causes of the diplomatic crisis and the possible steps and the limits of the escalation of the political EU-Belarus conflict. In their opinion, the parties must refrain from further actions that could result in conflict escalation, and to develop a clear and understandable road map for resolving the conflict.

For the Country or Against Lukashenka Yury Zisser publishes a short opinion, in which he suggests that notions “for the country” and “against Lukashenka” are mixed. He further elaborates that those against Lukashenko view events from the position of whether they are beneficial for Lukashenko, as they only care about vengeance against him disregarding the country and the people. The author opines that it would be more appropriate to assess events in terms of their benefit for the country, the people, the economy etc. The opinion resulted in the a range of comments from readers available in the corresponding section.

Alexei Pikulik: Opportunities of EU Influence on the Situation in Belarus are Limited BISS Academic Director Alexei Pikulik in his interview to n-europe tells about EU sanctions against Belarus, and future strategies of electoral campaigns. In particular, the expert considers the ineffective policy of EU sanctions with regards to Belarus and offers to return to the «Realpolitik» – "to recreate the missing arm through the expansion of contacts, creating strong links both within civil society and opposition, and among the bureaucracy."

Emergency Election Commission – Alexei Medvetsky notes that the September parliamentary elections will be much more democratic than any of the three previous campaigns. The intrigue of the elections-2012 lies in the fact that only part of the existing MPs will be able to pass into the narrow framework articulated by the president of the 25 percent quota. The intrigue is complicated by the fact that this time the elections will be under a particularly close scrutiny of the KGB.

Waiting for the Thaw: Prospects for the Consolidation of Opposition – political analyst Yuri Chausov notes that the current political system in Belarus reserves for the political opposition only a role of a media construct. Aware of this situation, the political opposition should build their tactics based on achievable goals within the big game of real political actors. These goals can be either increased the survival of oppositional structures, or perhaps their transformation from a policy object into a subject, going beyond what is usually called "oppositional ghetto."

Are the Independent Democratic Trade Unions of Belarus the Engine of Social Reforms? Eastern Europe Studies Centre (EESC) presents its newest study on the present situation in the democratic trade union movement of Belarus. It outlines the ways to achieve the most efficient use of the potential of trade unions in the formation of public opinion of the country. The target group of the given public opinion survey are the members and leaders of the independent democratic trade unions of Belarus as well as the members of other NGO's created under them.

ByNet: Everyone Plays for Themselves – Blogger Ales Gorskiy discusses the situation in Belarusian independent online media, and suggests that some of the most popular independent media resources lack objectivity, practise censorship and engage in propaganda similar to government media. He concludes that current opposition media would lose popularity if a new resource, free from censorship and propaganda, appeared in Belarus. First reaction to the article is already available from Svetlana Kalinkina.

Hymns of Hate – journalist Svetlana Kalinkina tries to answer the question why the Belarusian propaganda persistently attacks Poland. She comes to the conclusion that Poland is the only country in Europe which is trying to engage Belarus in the European Union, which contradicts the current geopolitical priorities of the Belarusian authorities.

No answers. Why I hate the Internet – In the TUT.BY studio Viktor Martinovich and Victor Malishevskiy reflect on the issues, if the Internet is an area of freedom or a "zombie box", a tool of unification or separation of people, and how to make the Internet "smarter" and "kinder". 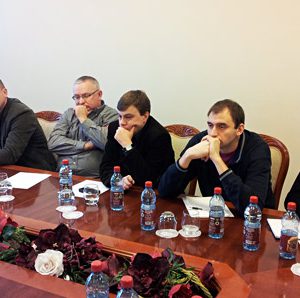 Roundtable on EU strategy towards Belarus

This week is marked with significant intensification of civil society activities, in particular in the field of human rights. Civil society organisations are adopting new charity technologies through online tools and attempt advocacy attempts, and it seems that governmental bodies began to make available draft laws for public discussion.

Challenges of EU strategy towards Belarus discussed in Minsk. On February 18, a ‘round table’ initiated by Belarusian Institute for Strategic Studies took place in Minsk. Its agenda included the challenges of the EU – Belarus relations and their development, as well as the impact that the visa ban imposed on some representatives of the Belarusian regime has on the EU – Belarus relations. The round table was attended by about 20 members of the Belarusian expert community, civil society and human rights organisations.

School of Educators-2012. Education Centre "POST" within the framework of the "Flying University" program conducts a training course "School of Educators". The School is to represent POST's experience and the concepts in the field of informal education. It will also provide an opportunity to get acquainted with some successful practices of the educational work, to evaluate their effectiveness, as well as develop trainers’ skills. The course will be held in Minsk, from February to June 2012 in the format of interactive seminars, workshops and lectures.

Distance learning for lawyers in nonprofit law. Republican NGO "United Way" invites students and the NGOs members to participate in the e-learning for lawyers. The program includes a wide range of issues relating to the legal regulation of non-profit organisations. The course is practical and considers the real issues faced by nonprofit organisations. Study period is March-December 2012.

EHREL in action. On February 16-19, the Belarusian Human Rights House hosted a working meeting and training within the framework of the project Electronic Human Rights Education for Lawyers (EHREL). Coordinators, experts and project partners discussed the key issues and perspectives of the project. The curriculum of the project, carried out simultaneously for Azerbaijan, Belarus, Moldova, Russia and Ukraine, aims at teaching jurists and lawyers professional use of international and constitutional law in the jurisprudence.

Charity online store. Charitable NGO "Belarusian Children's Hospice" has launched a charity online store www.takprosto.by , where everyone can put their goods, which can be bought by other online users.  The money from the deal goes to the bank account of the organisation.

On line service of charitable meetings. Online auction "Mae сэнс" was launched in October 2011 and has already collected about 60 million rubles and sold more than three thousand meetings. The project offers two ways to participate in a charity – one can fill out a questionnaire and to offer himself/ herself as a lot, and then go to a meeting with the winner of the auction, and also one can buy a meeting with a pleasant person. The money raised organisers give to charity – usually for children with serious illnesses.

Web platform for national monitoring. Crisisby.net developed by a group of Internet activists from different cities and countries, is a platform for national monitoring of crisis events in Belarus. The platform allows gathering and organising messages from multiple sources, applying them on the map, presenting in the form of graphs and tables. Everyone can send a message; post a link to the text, video or photos.

New office of EuroBelarus and Forum Syd in Vilnius. On February 21, in Vilnius a joint office of the International Consortium "EuroBelarus" and the Swedish organisation "Forum Syd" has been opened. The event was attended by leaders of EuroBelarus and Forum Syd, as well as representatives of diplomatic missions, international organisations and Belarusian NGOs in Lithuania. The purpose of the new Office is the promotion of civil society in Belarus.

Press-conference of the DisRights Office. On February 28, Office for the Rights of People with Disabilities conducts a press-conference in Minsk. The main purpose of the event is to summarise outcomes of the regional stage of the Office campaign. The speakers are Sergei Drozdovskiy, the Office coordinator, and Jamie Bolling, Executive Director of the European Network for Independent Living (ENIL). The event starts at 12:00, at the hotel "Yubileyny".

International Conference on alternative methods of rehabilitation. Belarusian Association of UNESCO Clubs in conjunction with the Branch of the Russian State Social University in Minsk invite to take part in the 2nd International Scientific Conference on alternative methods of rehabilitation of children and adults with disabilities, HIV/AIDS, cancer and other serious illnesses. The Conference will be held on 30-31 May 2012 in Minsk.

Volunteers wanted for building environmentally friendly houses. International NGO "Ecodom" (Minsk), together with the charity organisation "Houses instead of Chernobyl" (Germany) invites to participation in building of environmentally friendly houses in Lepel district, Vitebsk region. The project needs in builders on a volunteer basis (11 people) and translators of German (5 people).

Invitation to discussion about Legislation on Philanthropy.  Legal Transformation Centre invites to discuss the necessity to develop legislation on philanthropy in Belarus. For this purpose, the Centre's web site has created a special section with documents on international experience in the legal regulation of charitable organisations, reference to media publication, etc.

Experts of civil society involved in the drafting of the pension reform. In March 2012, the government should get a pension reform project, developed by independent Belarusian experts, including representatives of the Business Union of Entrepreneurs and Employers. The experts are going to stir up the Belarusian authorities, and, above all, the Ministry of Labour and Social Protection regarding the issue of reforming the current pension system.